It is time to move on again. As less and less beer and alcohol was consumed in the course of the last days it was easier to get up to watch the sun rise. Those who had fallen ill the last days where in the mend as well. Someone forgot to tell this to the clouds so the sunrise was a bit disappointing.

The easier to get dug into the hot sand one last time. The poor attendant responsible for digging is in did get quite a workout today. Next – scrubbed clean again – one last hop into the onsen before breakfast. This time grilled mackerel instead of grilled salmon. 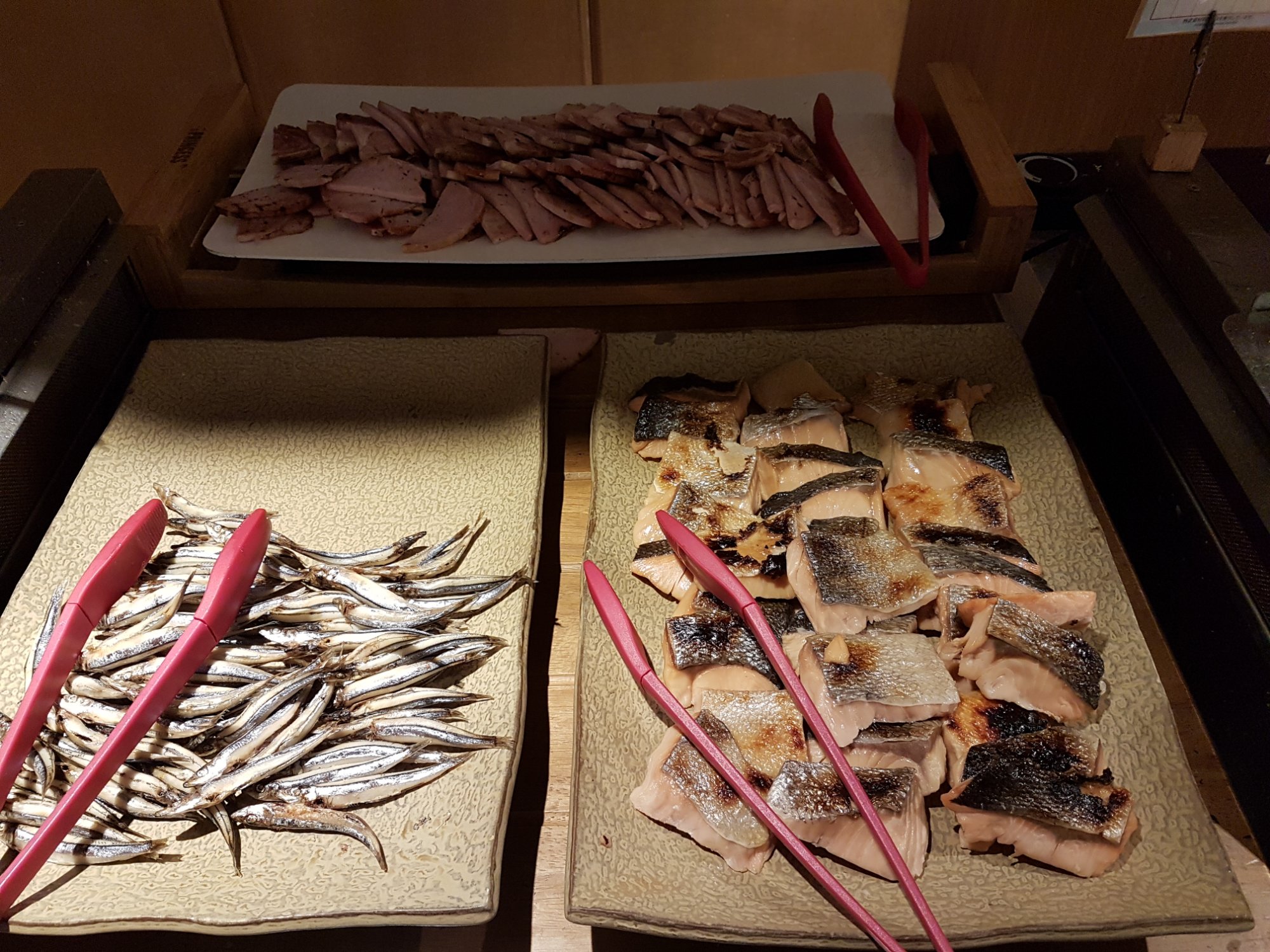 Having gathered our gear we were off to the station via the hotel shuttle bus at 9:07. Of course with a propper bow and farewell from the staff. 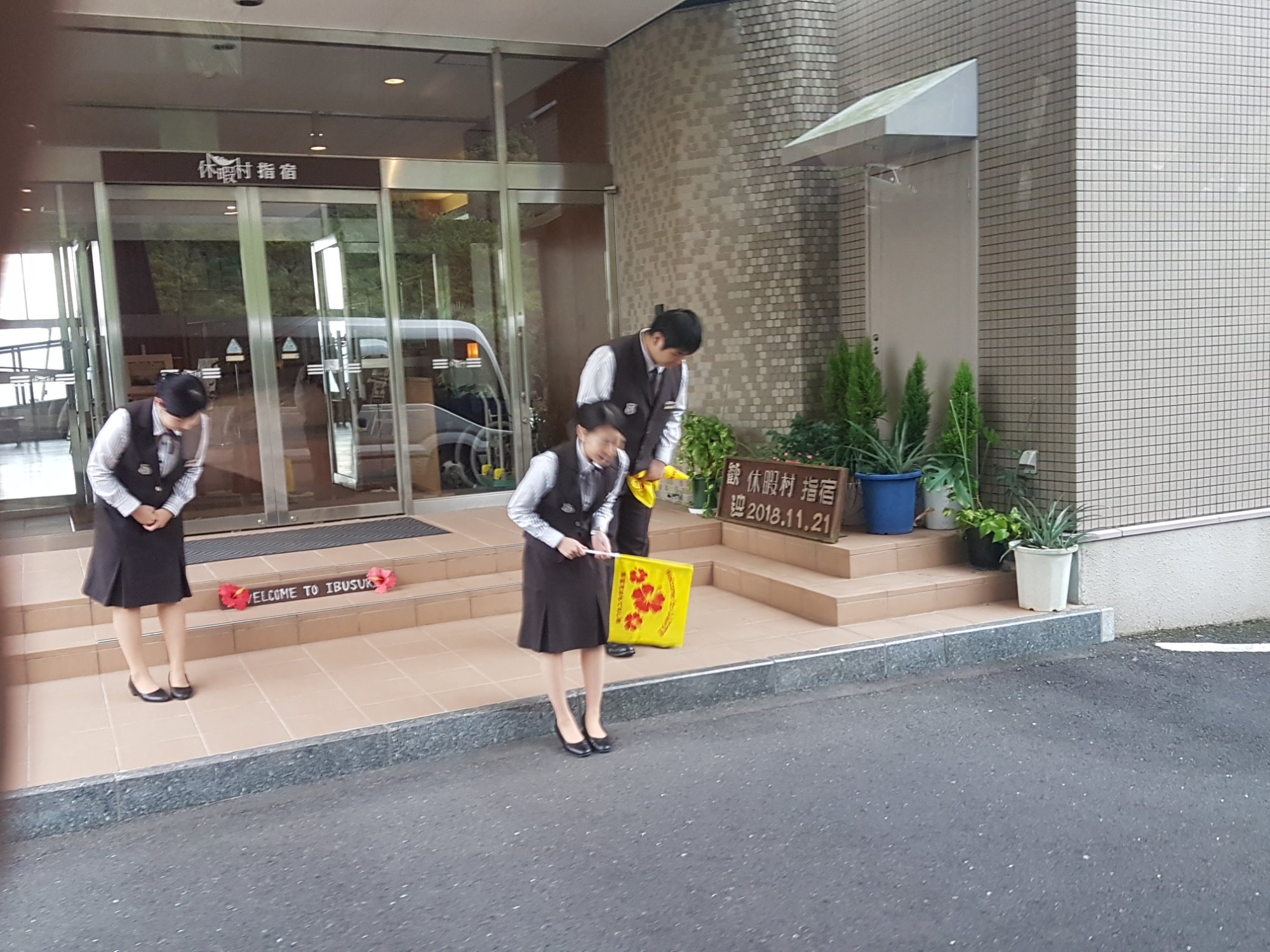 Tickets were available from the machine or written by hand at he ticket counter. The train itself was a bit more modern than the one on our way here. It is still possible to get your ticket on the train if you go very local though. Benches are in the modern configuration all on the side instead of 4 seats facing each other.

Somehow the last days seemed to have taken a toll. Most of the group I’m traveling with emulate the Japanese pattern of – I’m sitting, I got time, let’s take a nap. The landscape was lost on them that way. Arriving at the hotel we where of course way to early for check in. So we left the other part of our luggage for safekeeping and went to the mall in the center. 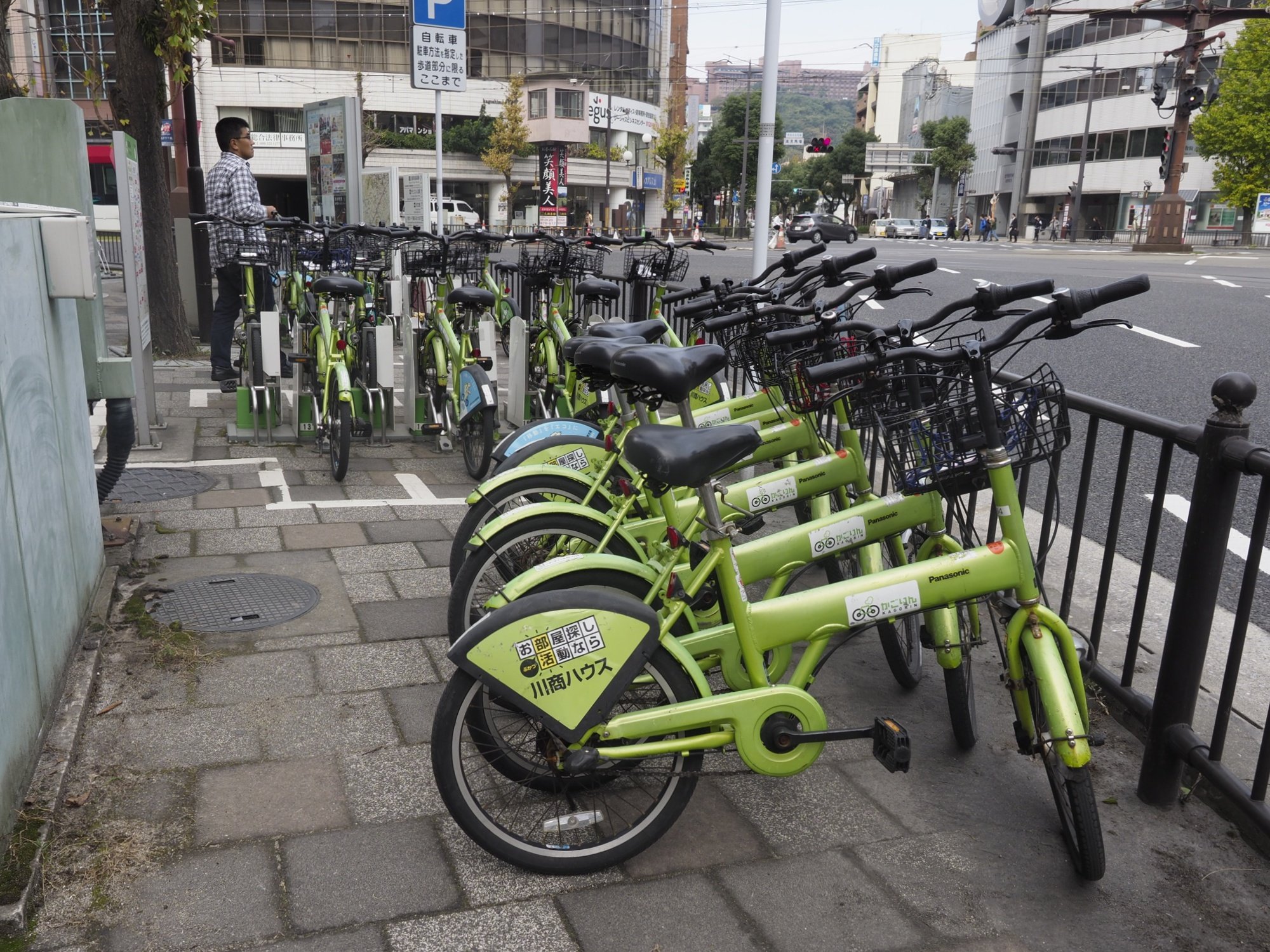 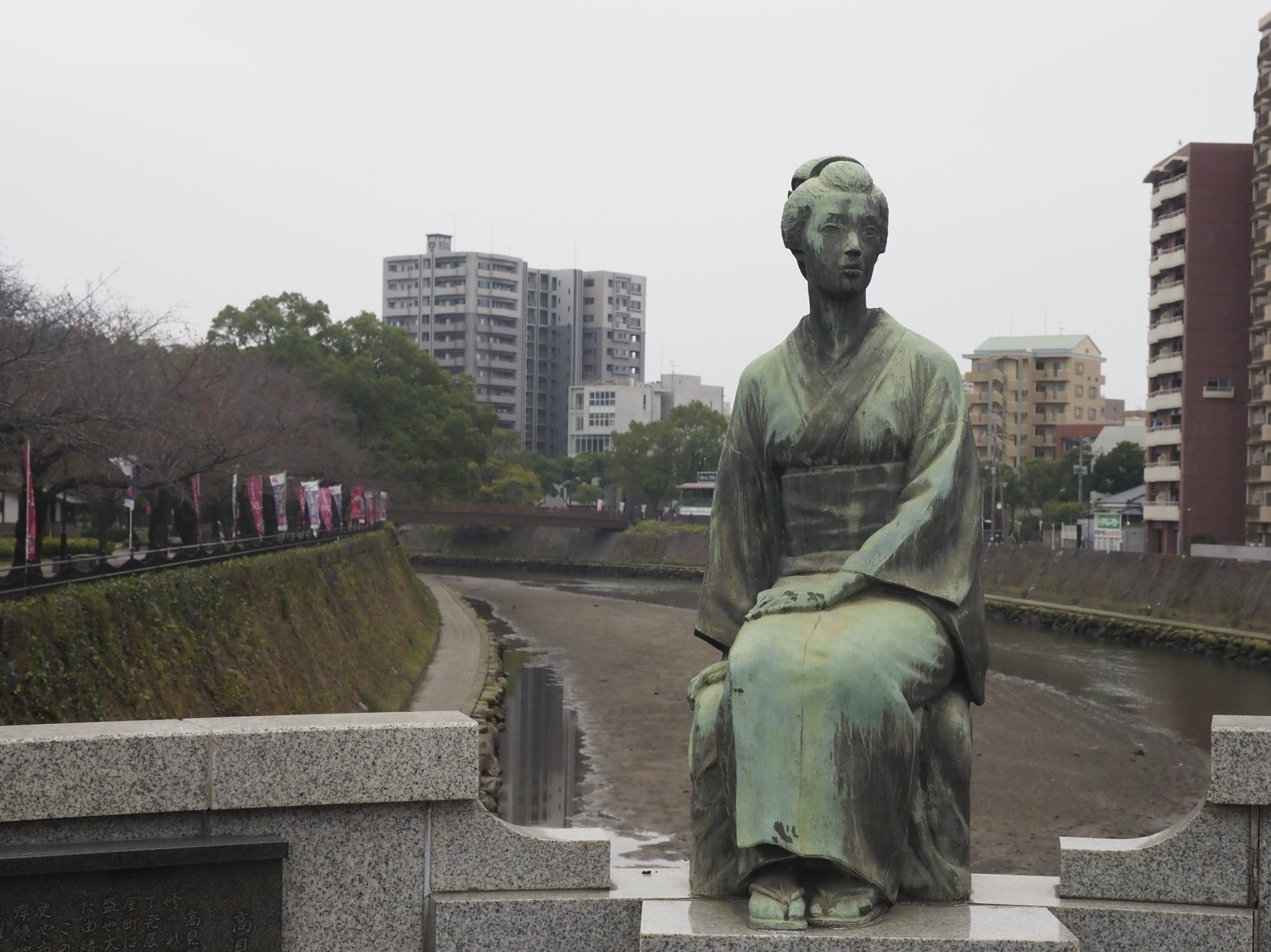 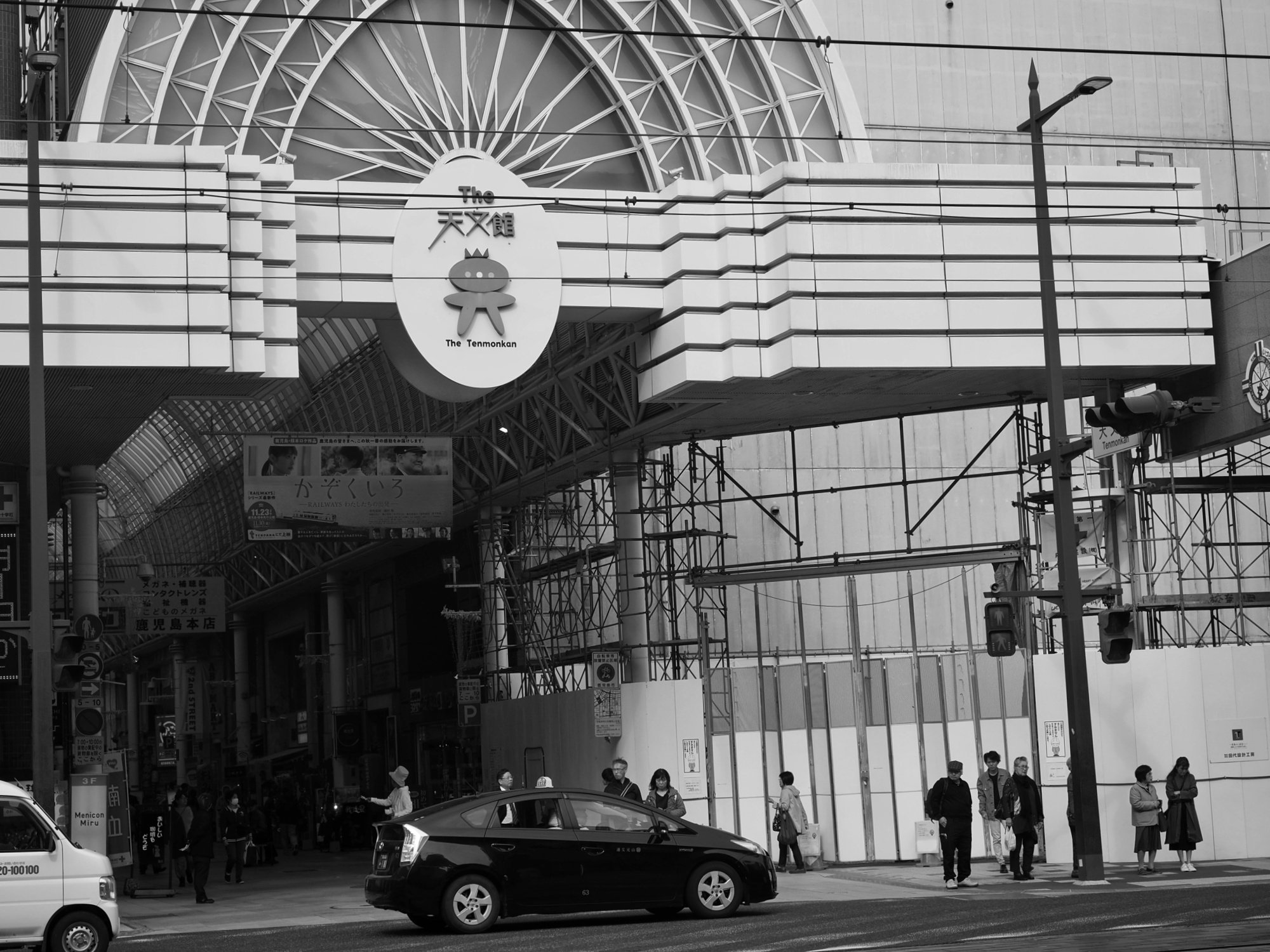 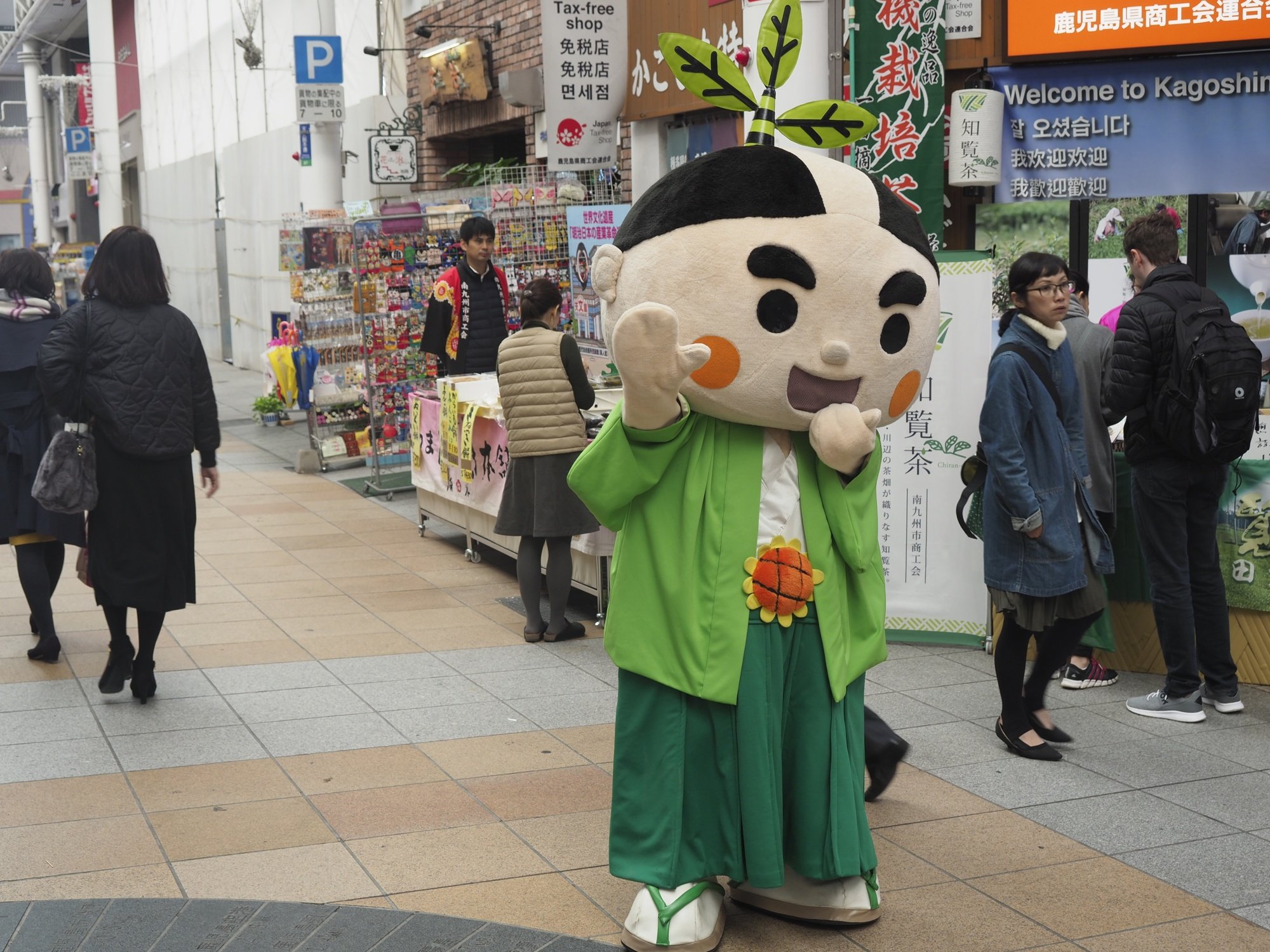 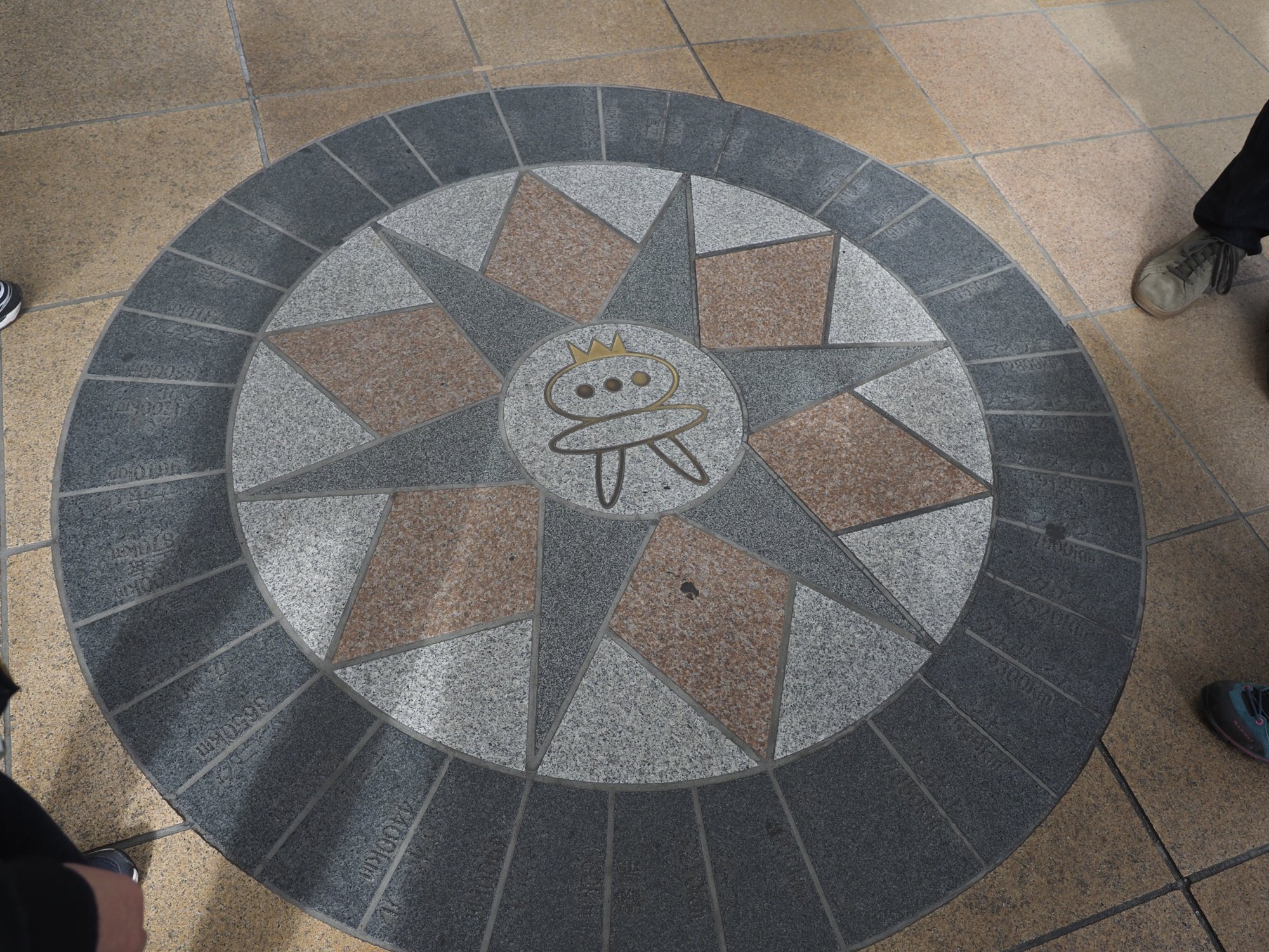 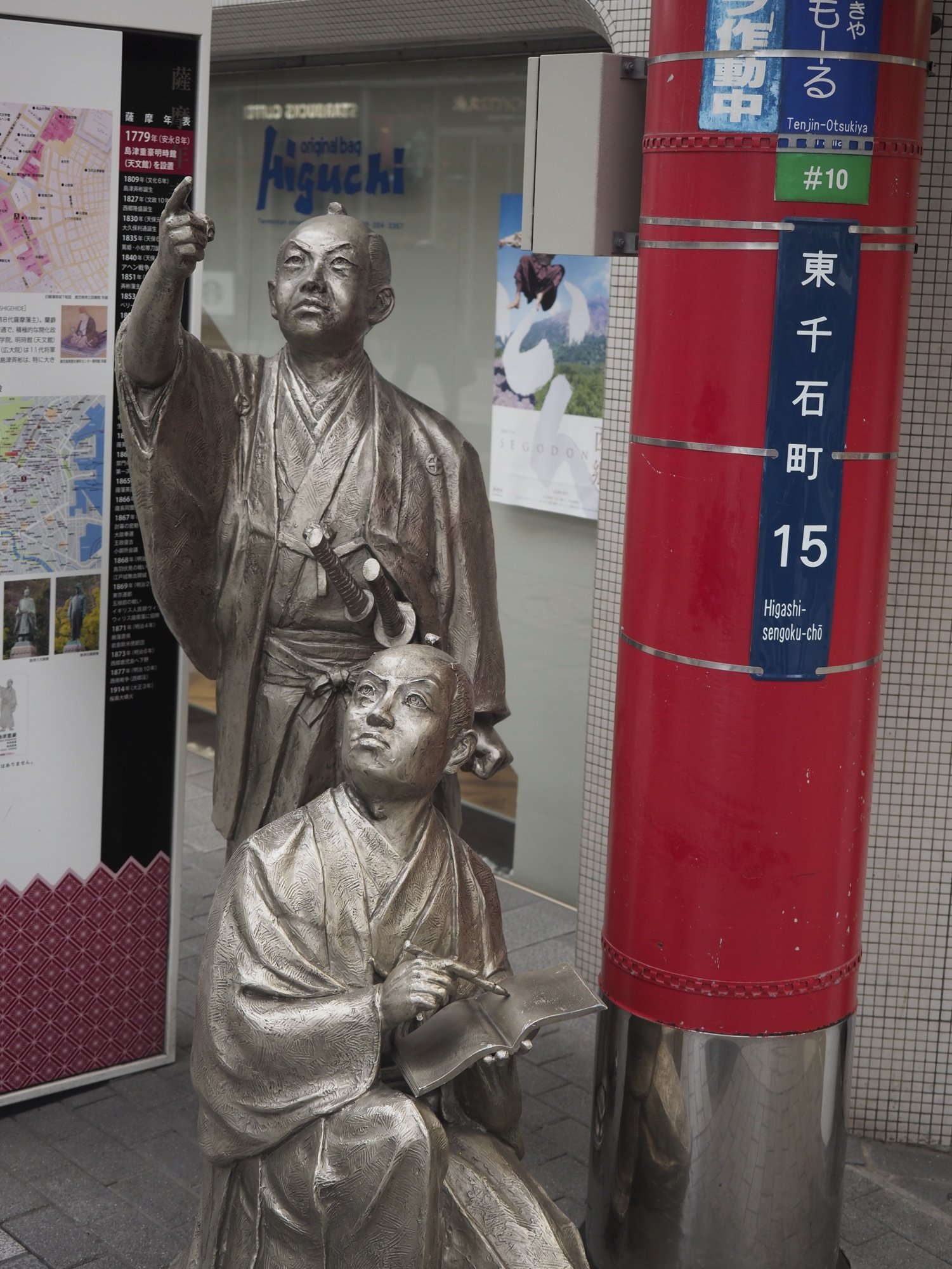 Next our way lead to Terukini Shrine where we met some cute little people (I guess these were of the 3 year old variety) decked out in kimonos and “sandals” to visit the shrine for a blessing ceremony. This ceremony is custom for children of 3, 5 and 7 years at this time of the year. 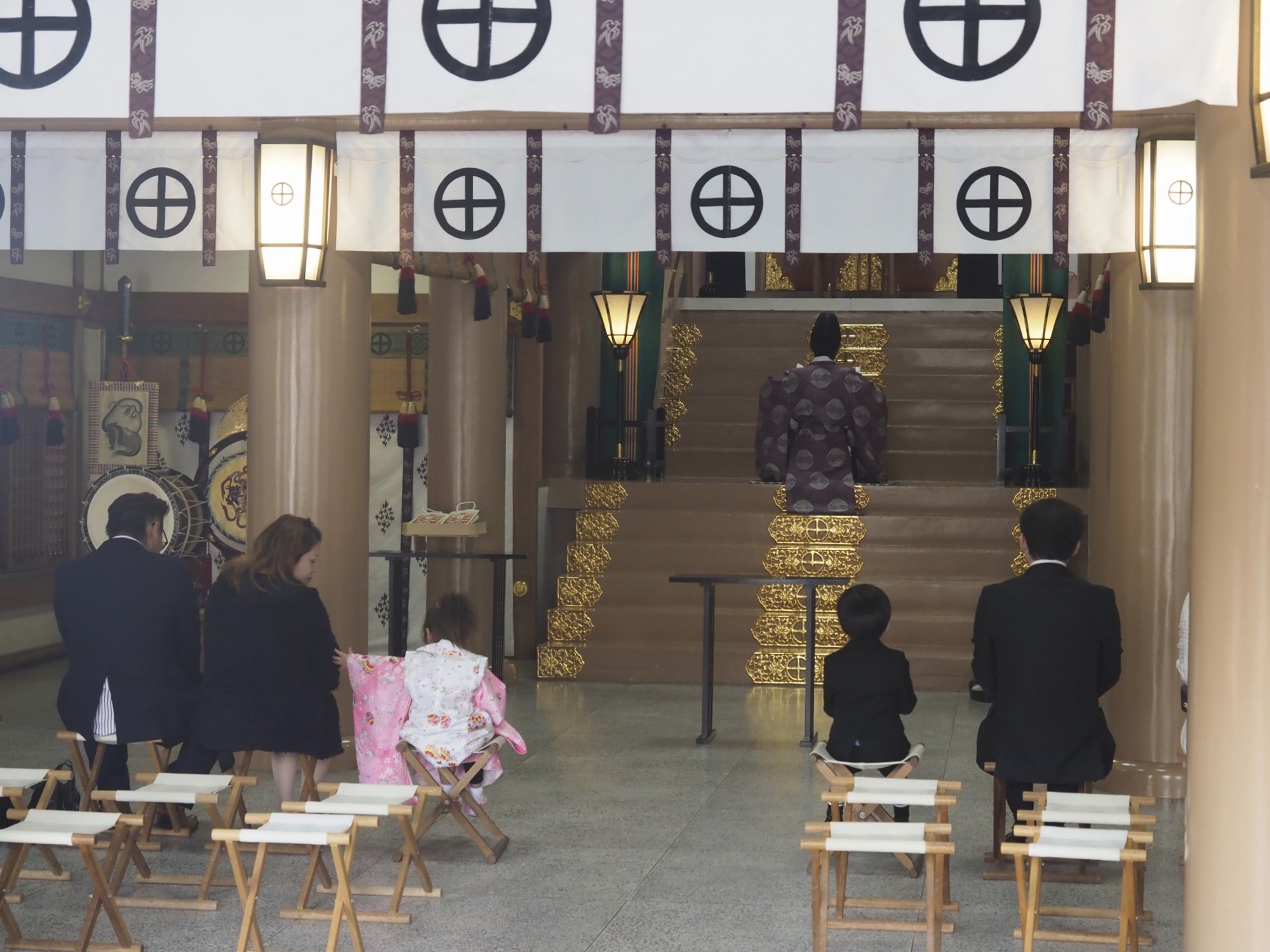 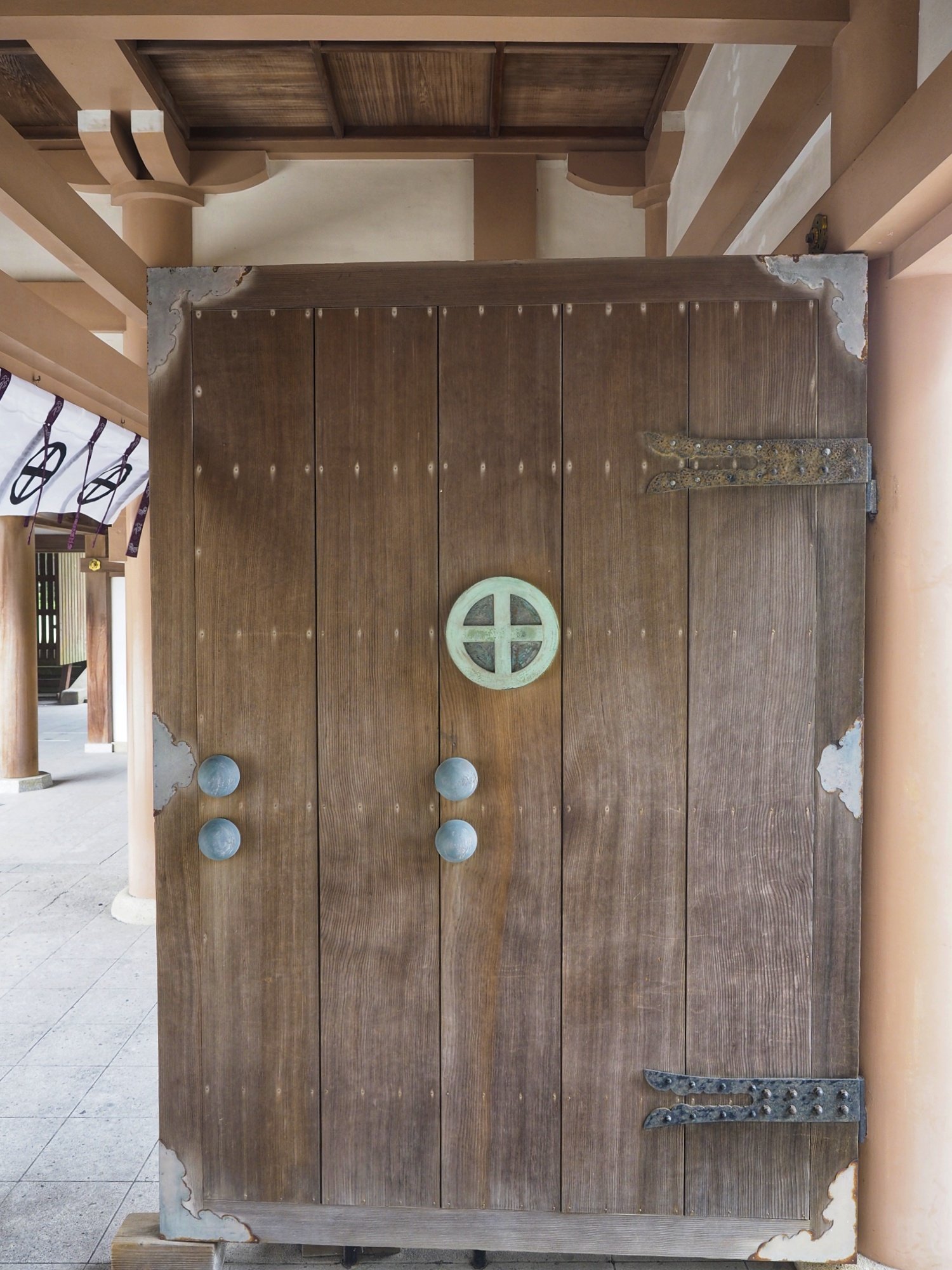 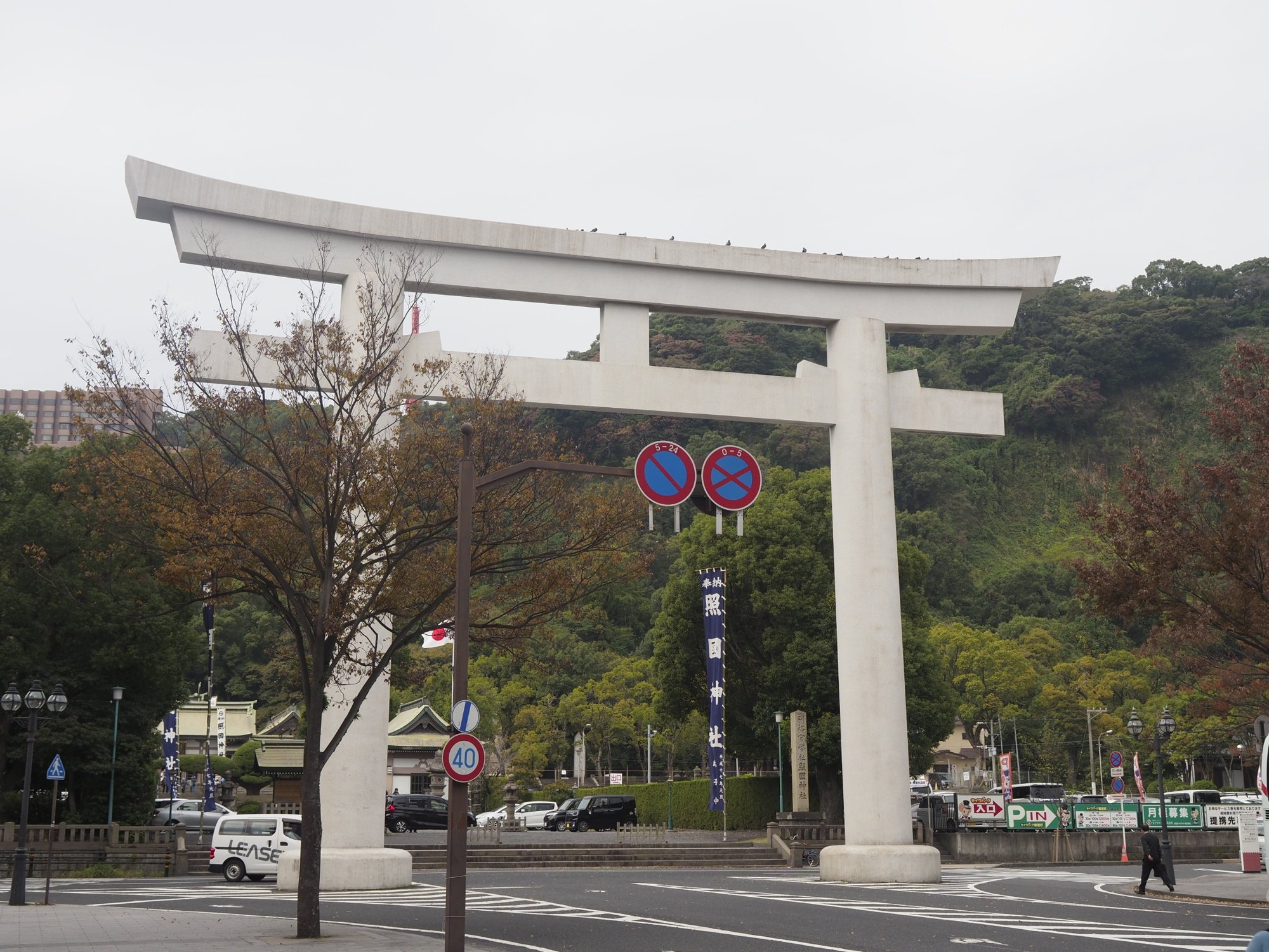 After we visited the Shimazu museum. This museum showcased the opening of the Satsuma clan to the west. In 1862 an Englishman was killed by a Satsuma retainer. In retaliation the British Navy bombarded Kagoshima heavily. Impressed by this show of force the clan leader sought out good relations with England. There was even a group of 19 students sent to study in England. On the other hand engineers from the empire where invited in to improve the local textile industry. This and the students new knowledge about economics lead to a reduction and better handling of loans and lead to a better financial situation. Even though the Satsuma clan was always more open to outside relations this was a bit too much out of the norm for the full isolationist policy of the shogunate and sanctions where implemented.

As a consequence the Satsuma clan was a big participant of the Meiji restoration. On the students sent to England would be the first head of finances. As an add-on the modern flag of Japan. The one we know was designed here. A replica of that old flag together with a drawn description with measurements was on display here. 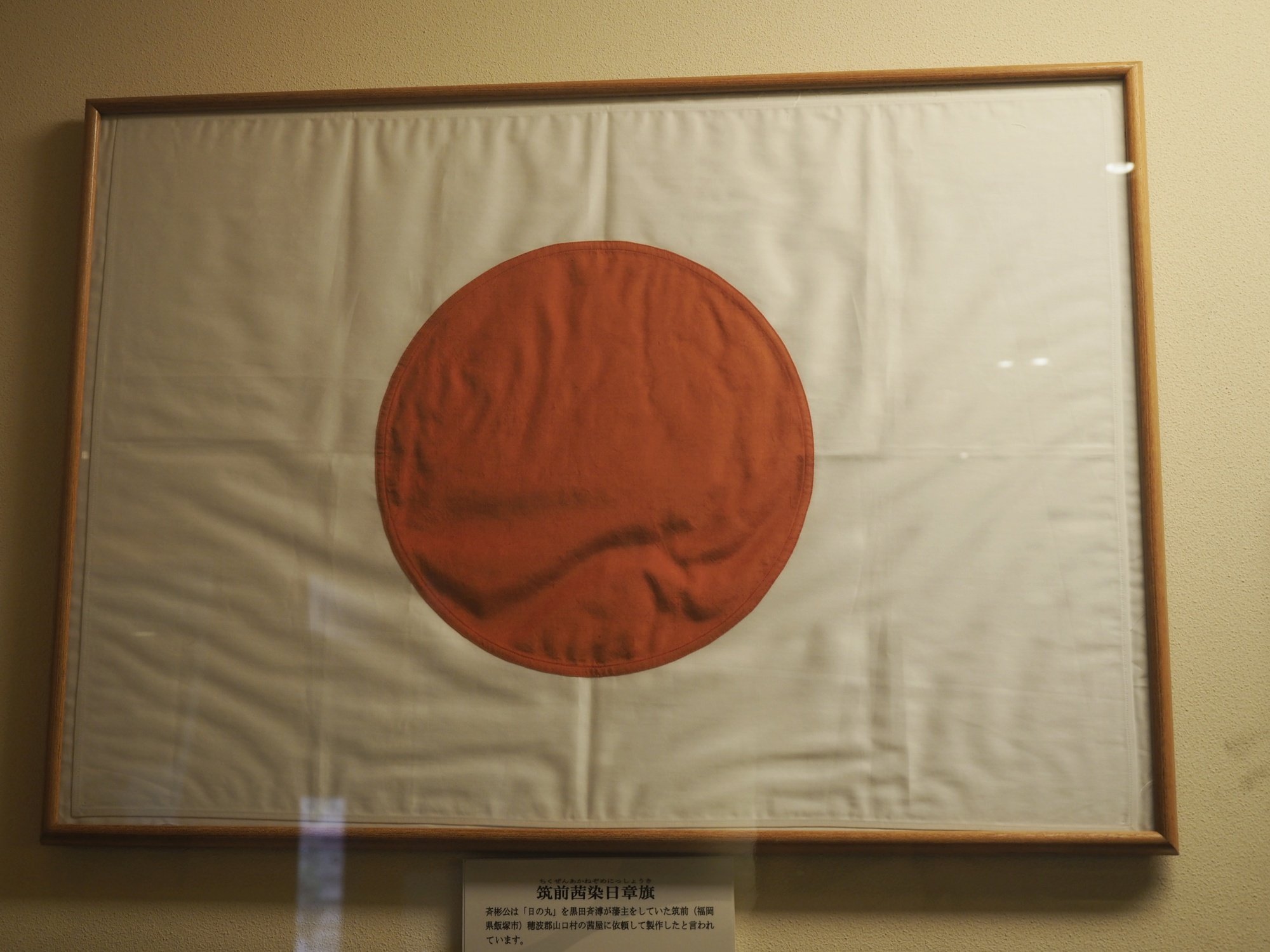 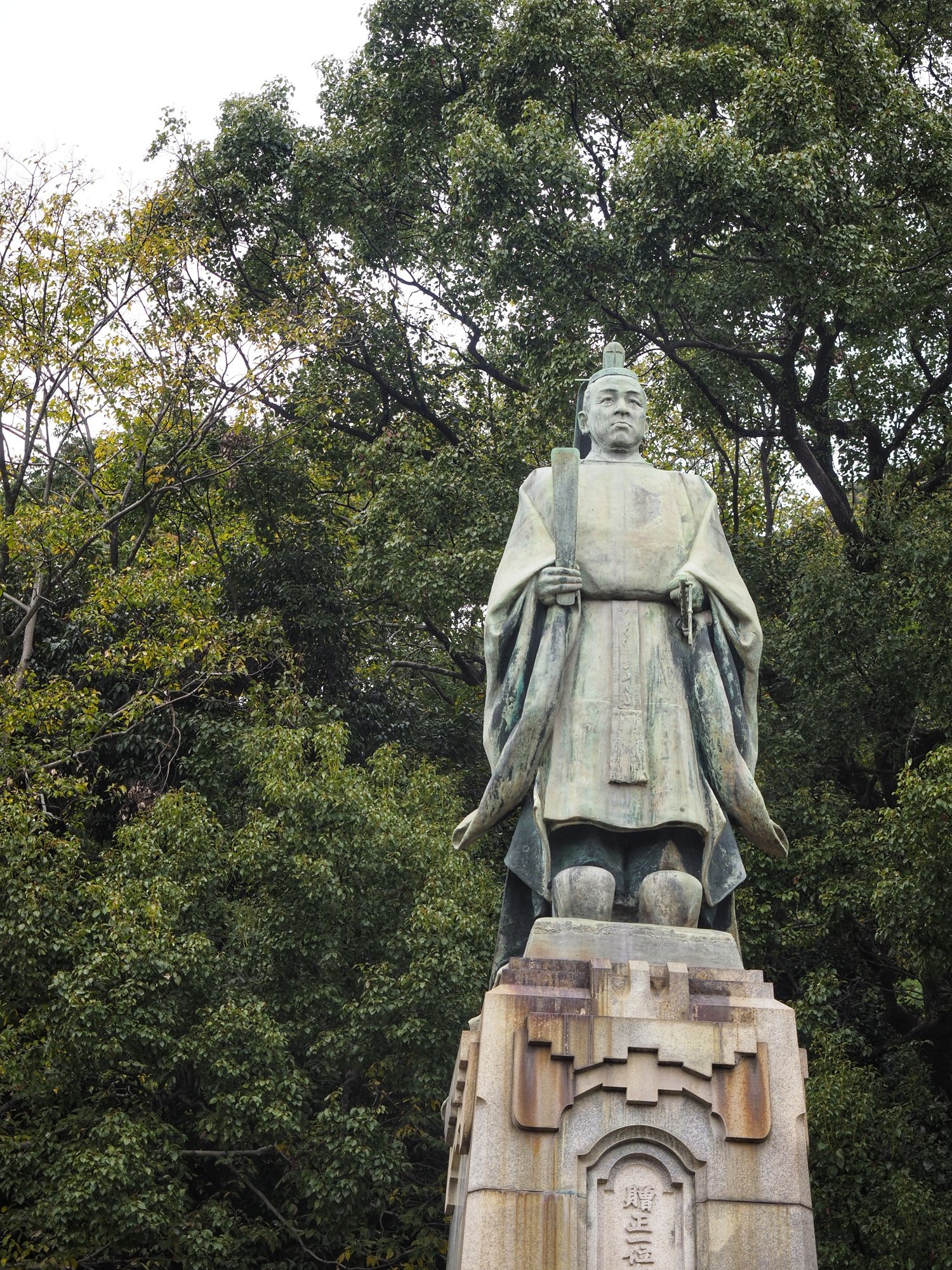 For lunch some treated themselves to some dry aged wagu (beef) at a steak house. 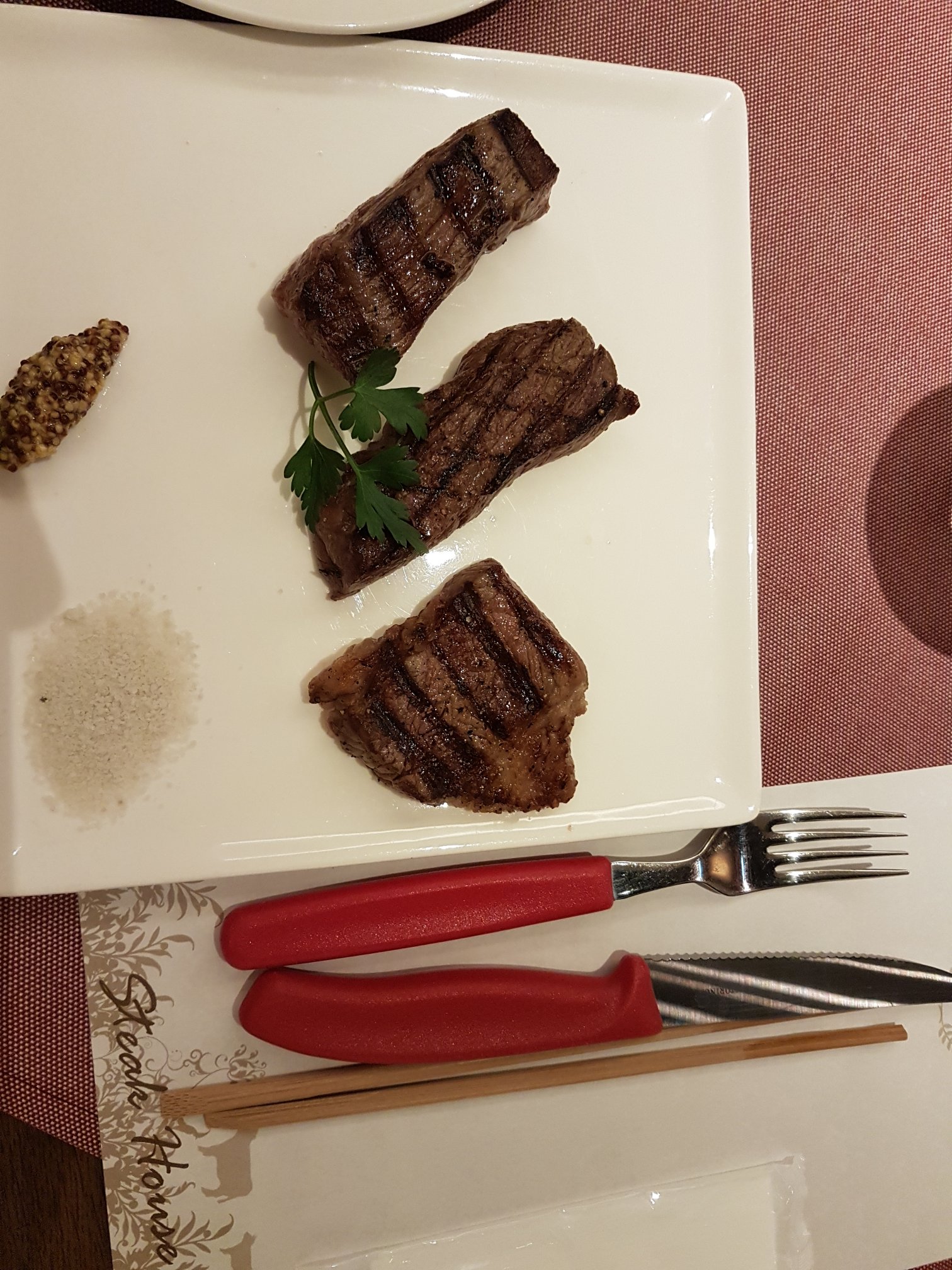 Having gathered ourselves we now went past the statue of Saigo Takamura (who is supposed to be a big figure in Japanese history but lead one rebellion too many, which lead to him dying in disgrace but later being rehabilitated,… ). Unfortunately there are no pictures of this man. That way statues and depictions are always only a guess. They all agree on him having big eyebrows though. 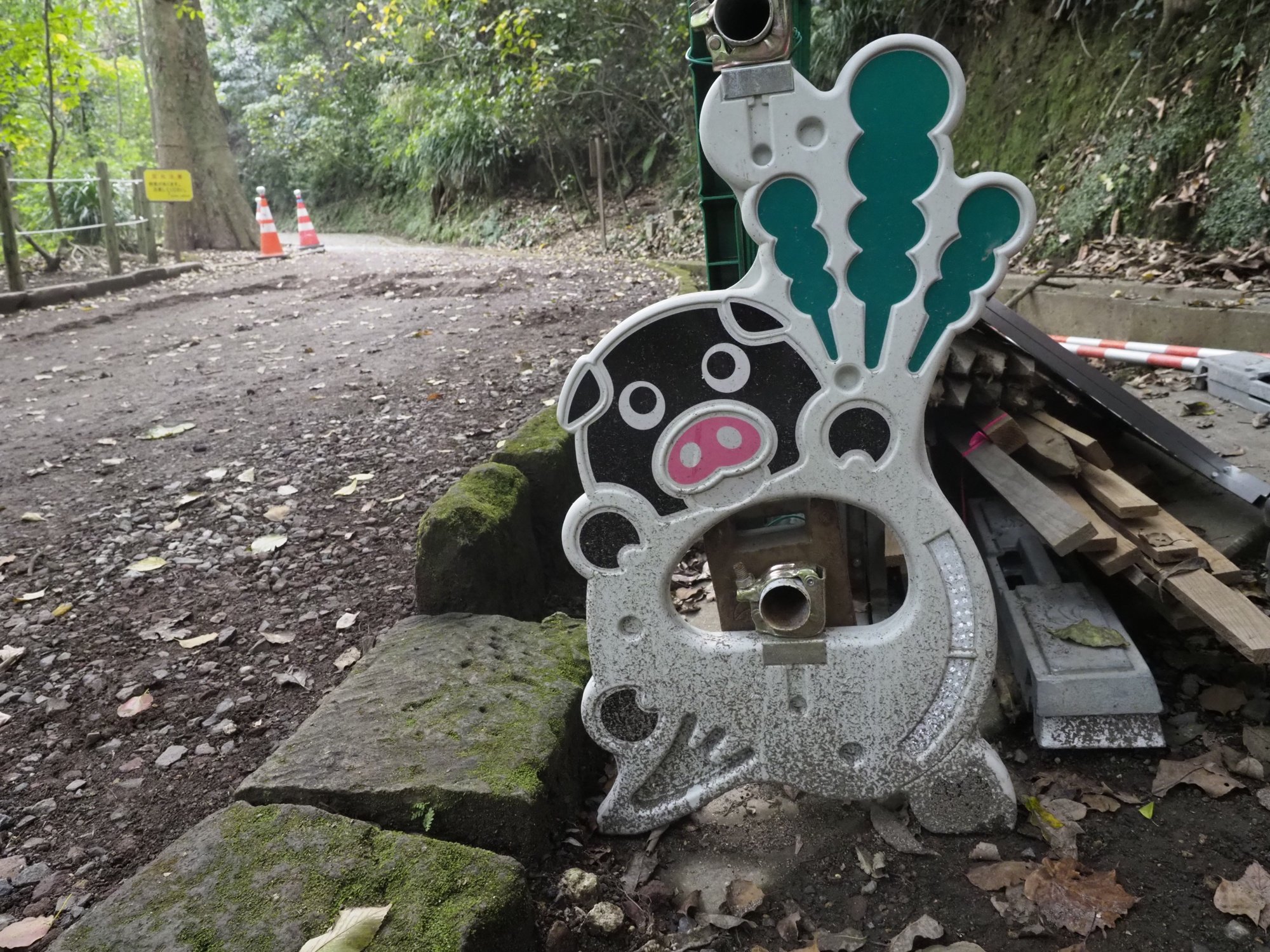 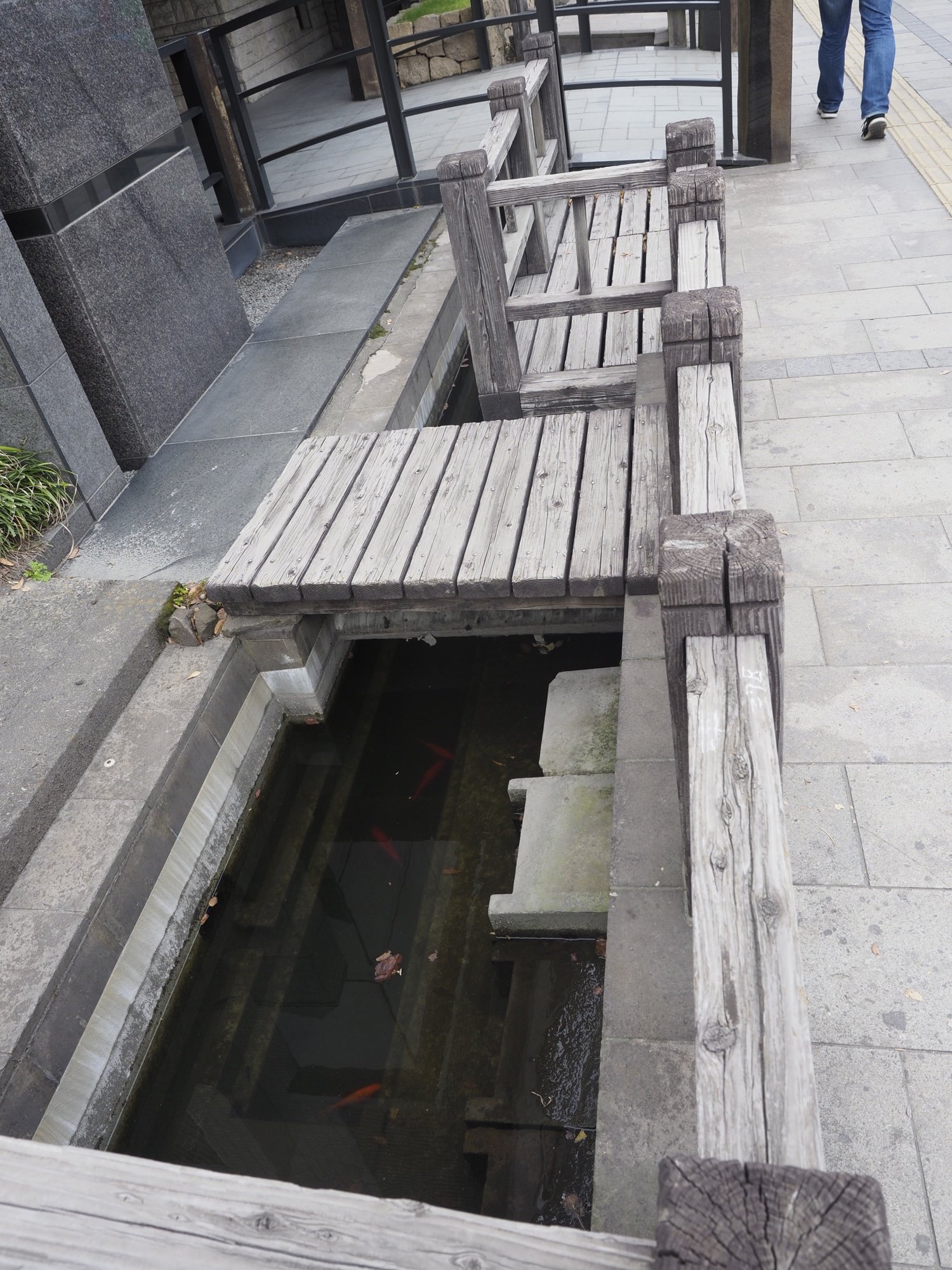 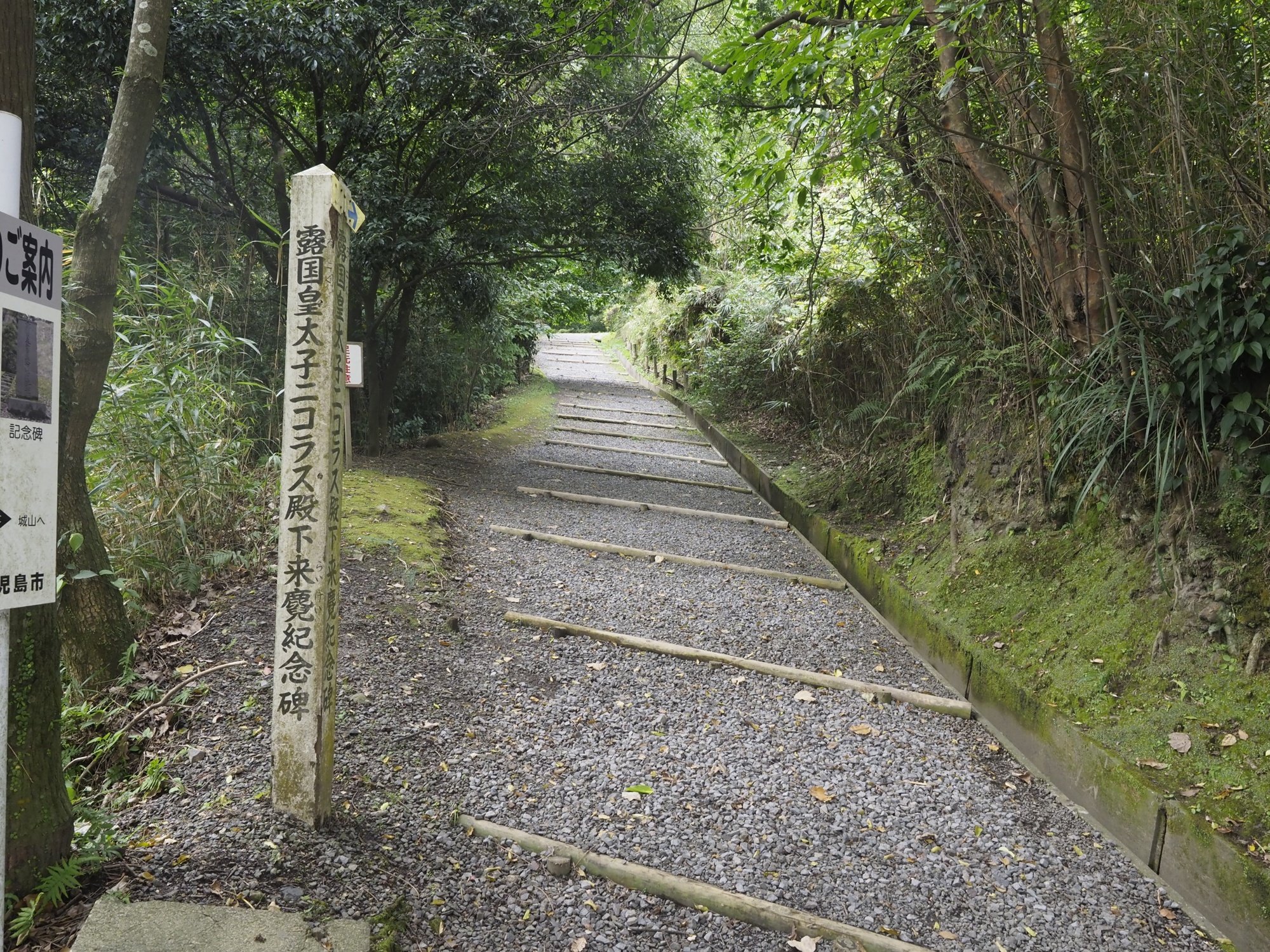 The way went up Shiroyama all the way up to the viewing platform. We did pass some sports classes from a local school where the kids where clocked while running up. After the obligatory group photo, some snacks (hot tee from the vending machine which talked to me) and a view to the smoking Sakurajima it was time to move back down again. 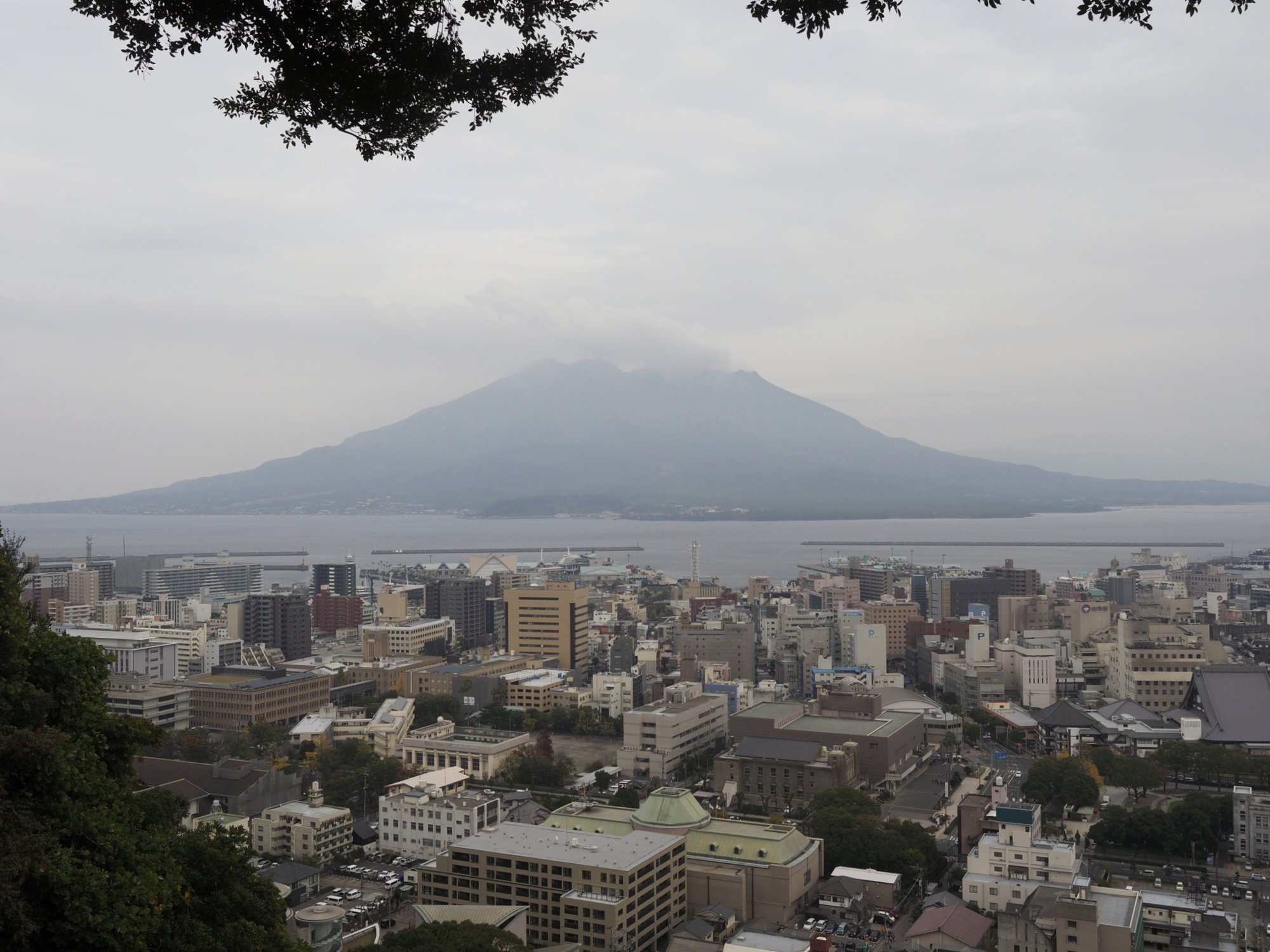 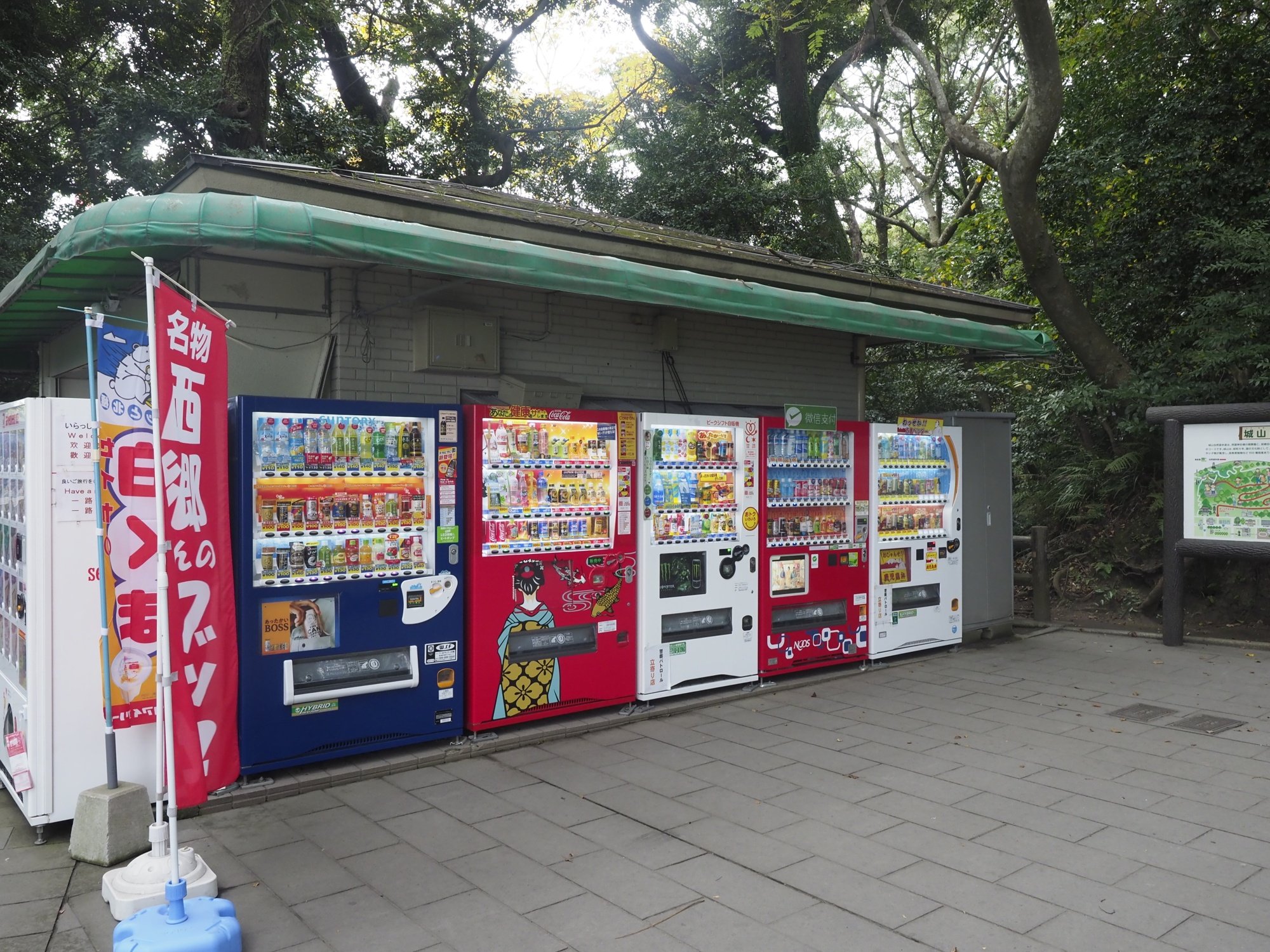 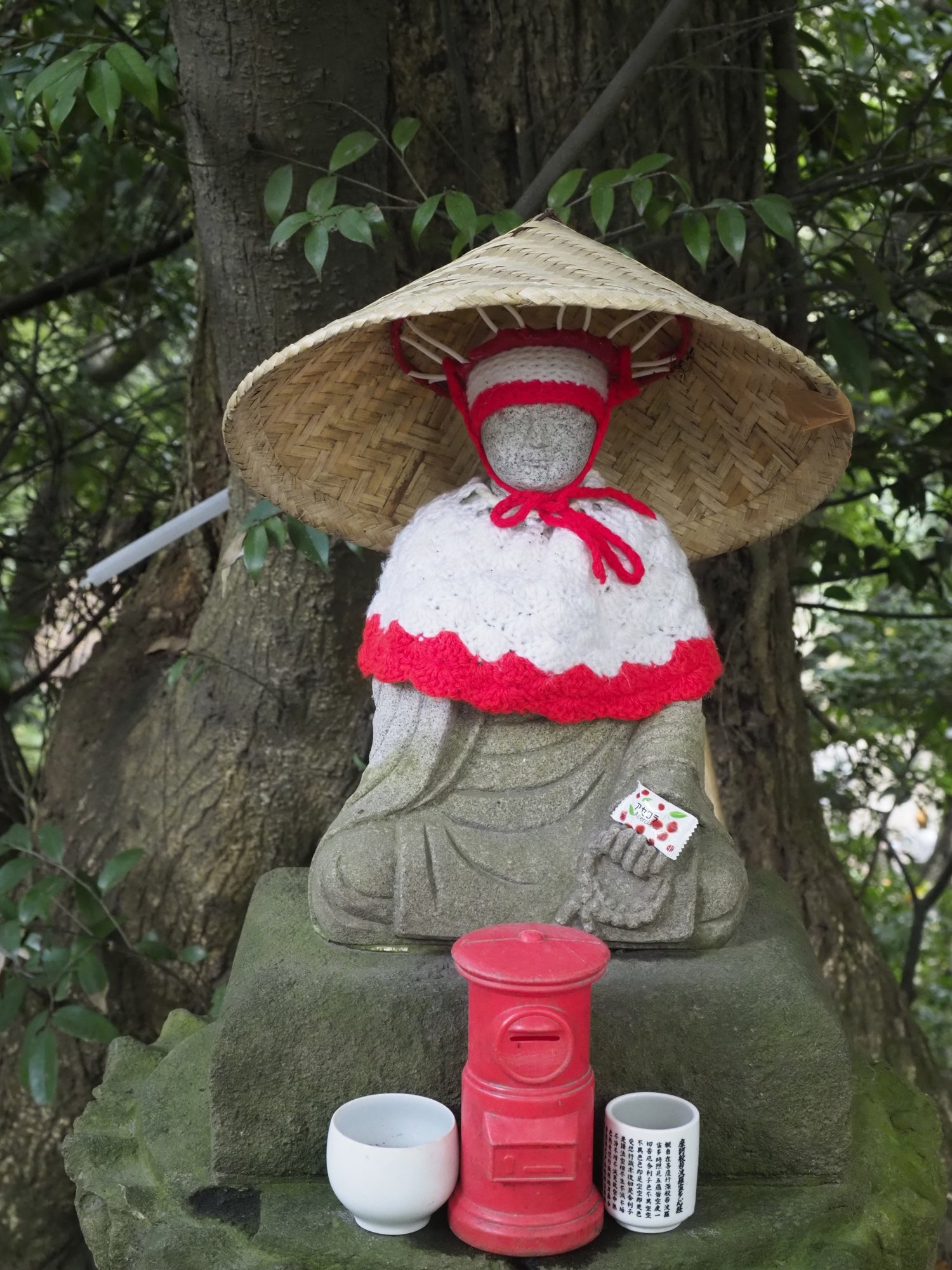 We even got to choose whether to use the wide road we used to go up or to try a steeper “shortcut”. At the next crossing the group split into those who wanted to walk some more and those who wanted to go back to the hotel. The official part of the day was finished anyway. 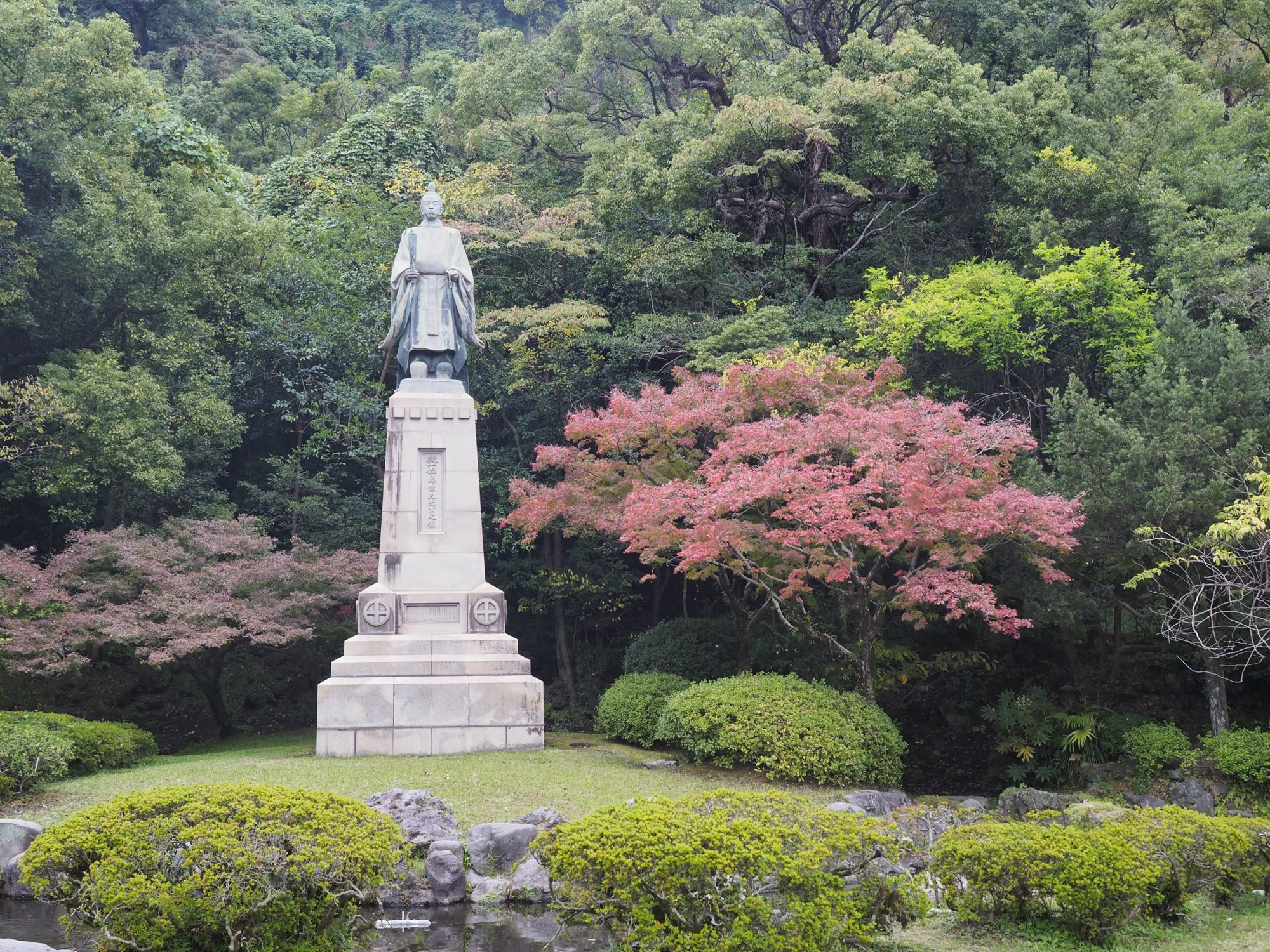 I decided to visit one of the shopping malls and then go for a free concert to commemorate 150 years Cangoxina (official signage at the event) lighthouse, 150 years Meiji restauration and 70 years of the coast guards military band which played together with local (high?) school students. The concert took place in front of Kagoshima Chuuoo. 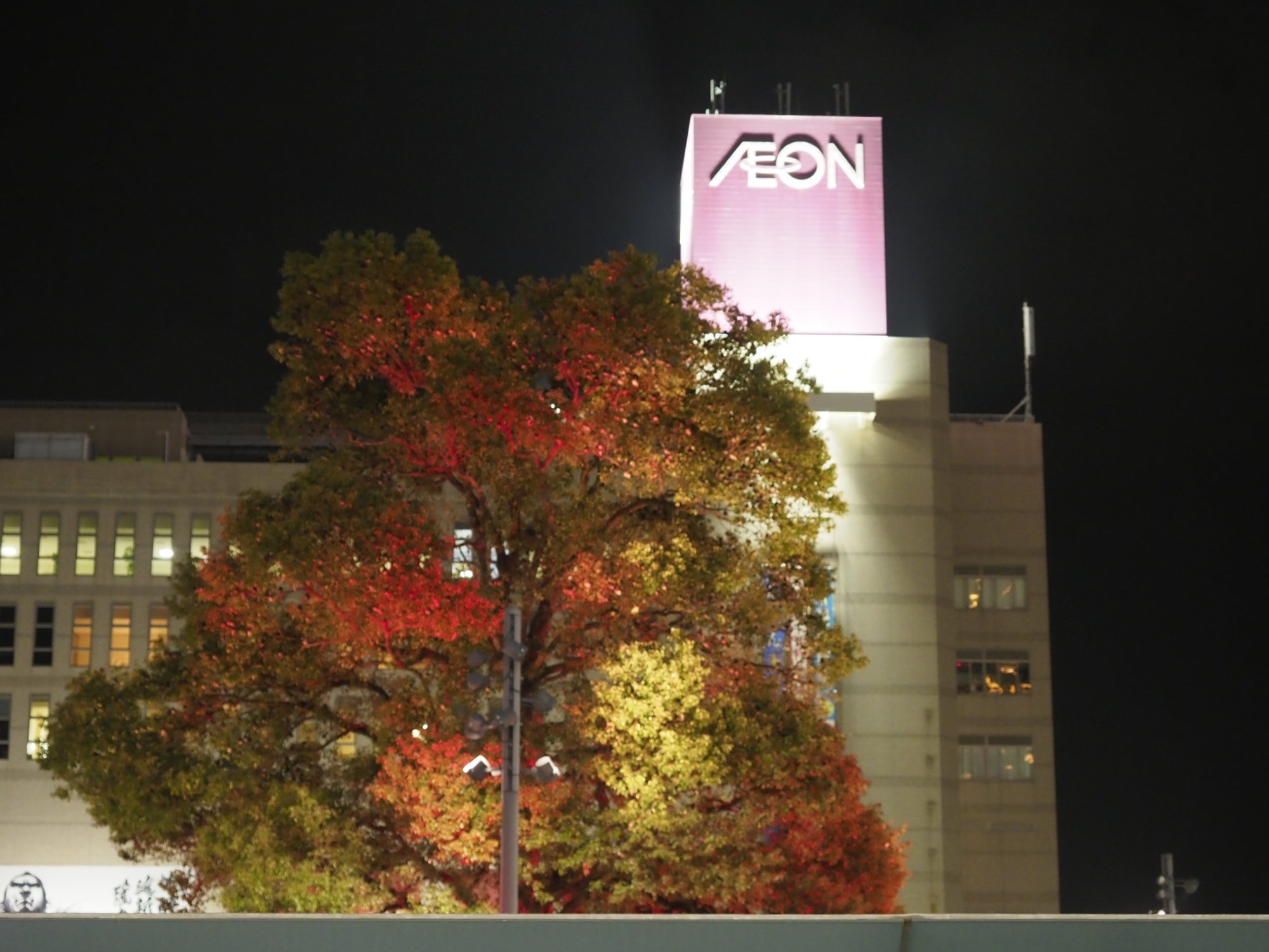 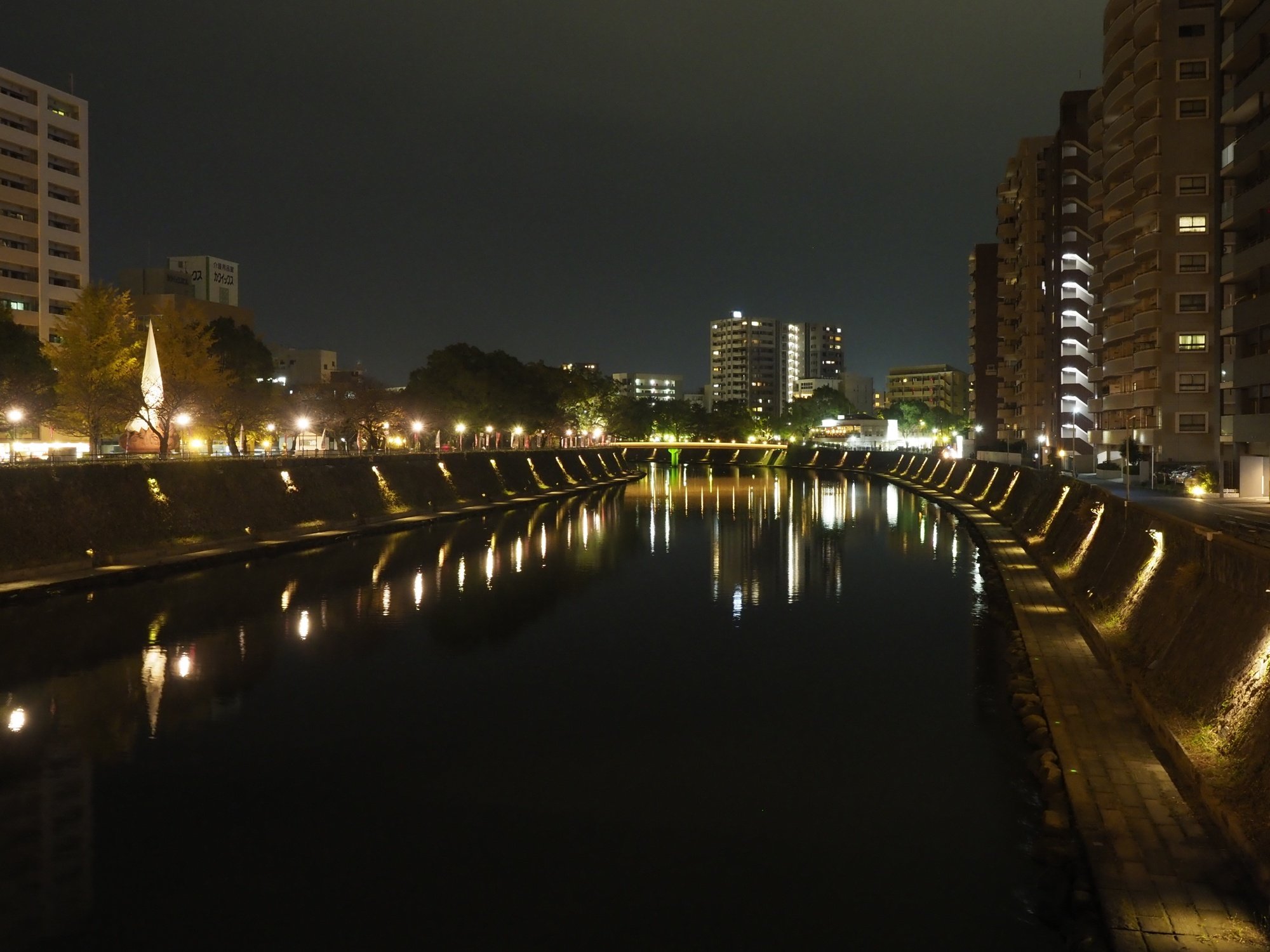