Early day today and a forecast of sun, sun and sun again.

Breakfast as usual hearty. Then taking the train to Kyoto. Here a short stop T a Konbini as two did sleep through the stop. (Happens if you have a train ride of almost 40 minutes. ) So late additions to the sugar storage where made. Our actual goal was the golden pavilion which unfortunately does not have a train station right next to it.

So new experience: Getting on a local bus. And this bus definitely was not made for the number of tourists that want to visit the sights on this line. And you pay as you leave the bus. So to get out you have to squeeze through all the people who want to stay on. There was only one instance where I saw someone exit the bus at the back, run up front and pay at the driver’s.

As we where equipped with the 3 day pass we did not have to handle money fortunately. But those who did not had to have the correct fare with them as the system does not provide change. (230¥ for adults, 120¥ for a child)

After leaving at the correct stop we made our way to the pavilion. (Up a small hill. What else? )

The tickets where nicely made up with a big slip of nice paper and what looks like calligraphy. People are led in a way so that despite there being loads of people you had mostly unobstructed views. But to keep people moving was not an easy feat. The guard tasked with this had to get laud a few times. 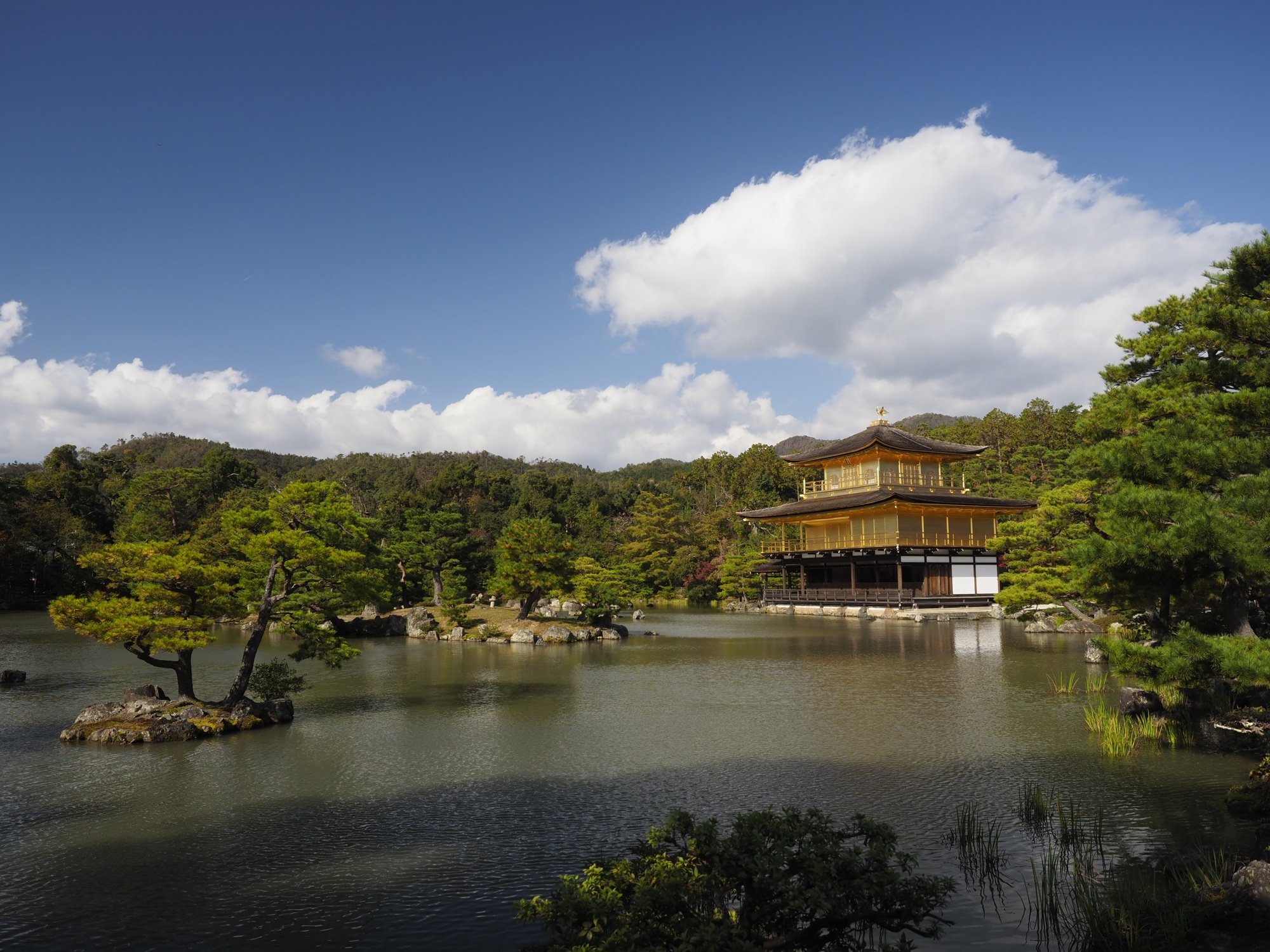 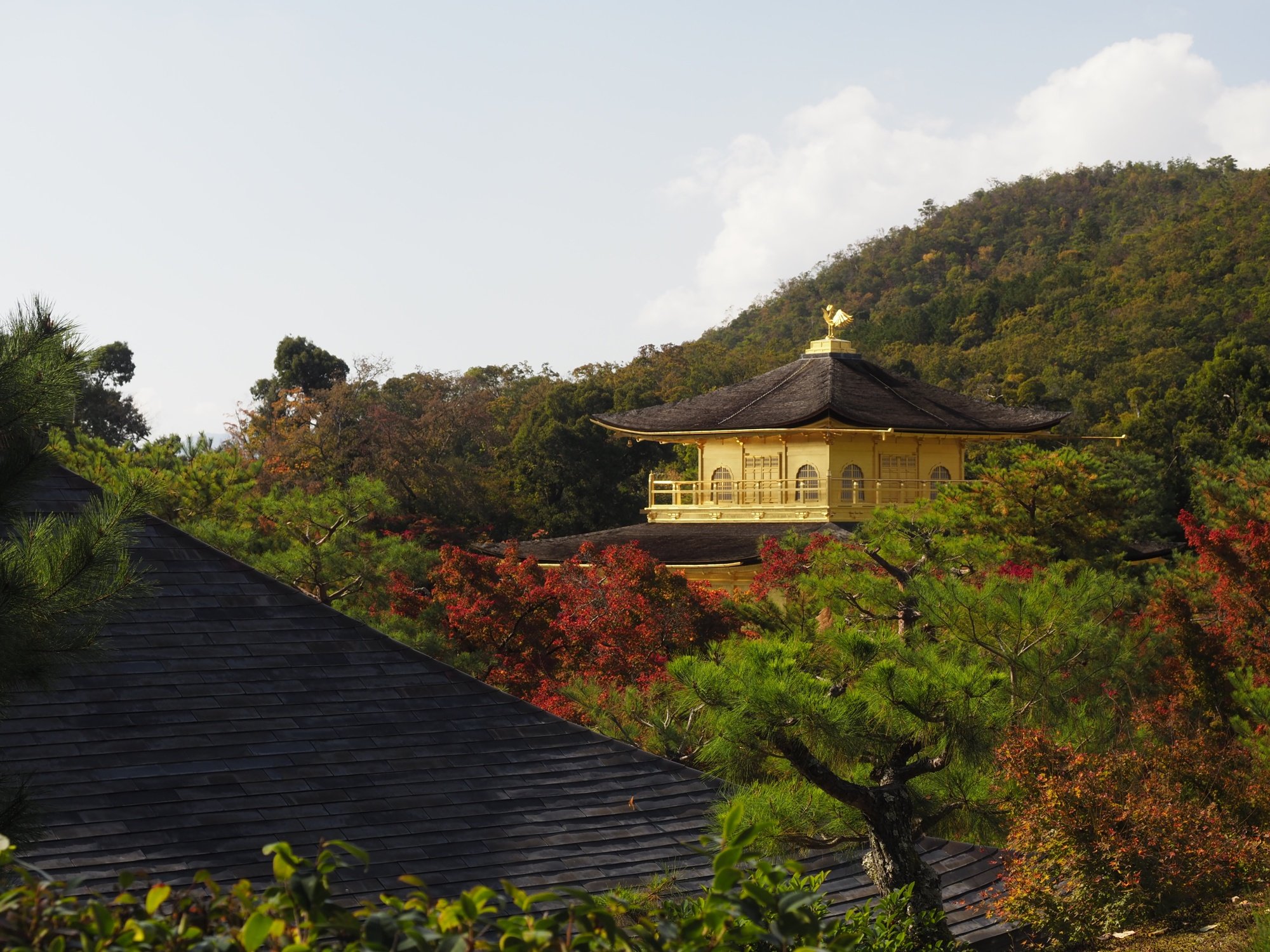 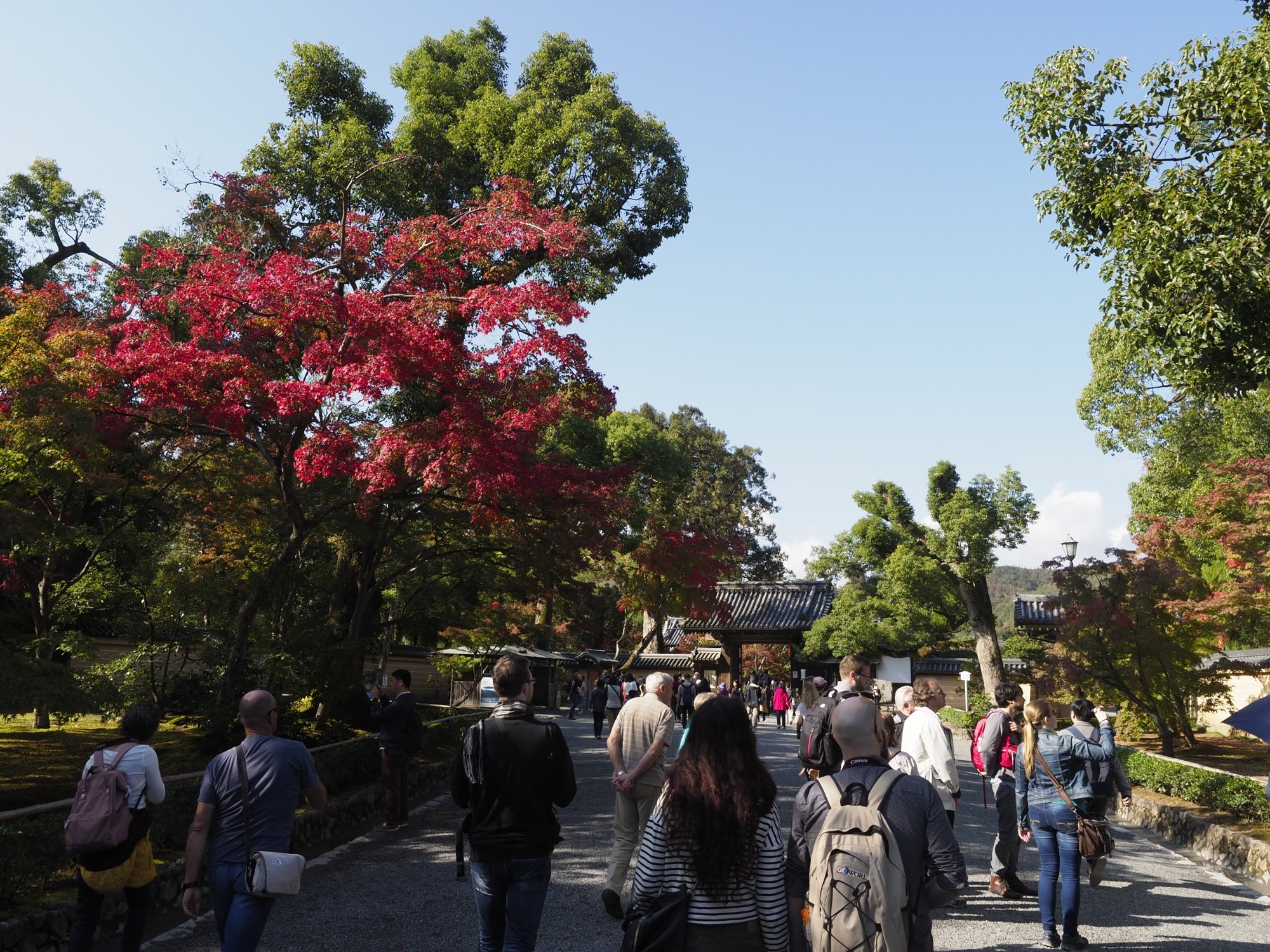 The setting was well thought out with an open plan to the lake and closed up to the land side.

One of the vendors at the exit offered sample salted tea. Which is a bit of a surprise if you expect regular tea.

So on to the bus stop for our next stop. Unfortunately this bus stop was out of order. And now sign anywhere. Just a uniformed man telling people in Japanese to use the other bus stop. All in all it seems like the Japanese economy is very people based.

Back at the bus top the next surprise. A long queue on a repurposed bike lane. Just one queue and many different lines. This promised to be interesting. And it actually was. As the attendants where keeping the people in line and where calling out destinations. Only then where you allowed to leave the line to go past those waiting for other lines.

Off at Ryoanji. This Zen temple offers a renowned stone garden in a very tranquil setting. To get to the stone garden we first had to leave our shoes at the entrance of the temple. Without stepping on the wood with your shoes please! Well to much for some of the tourists to handle. 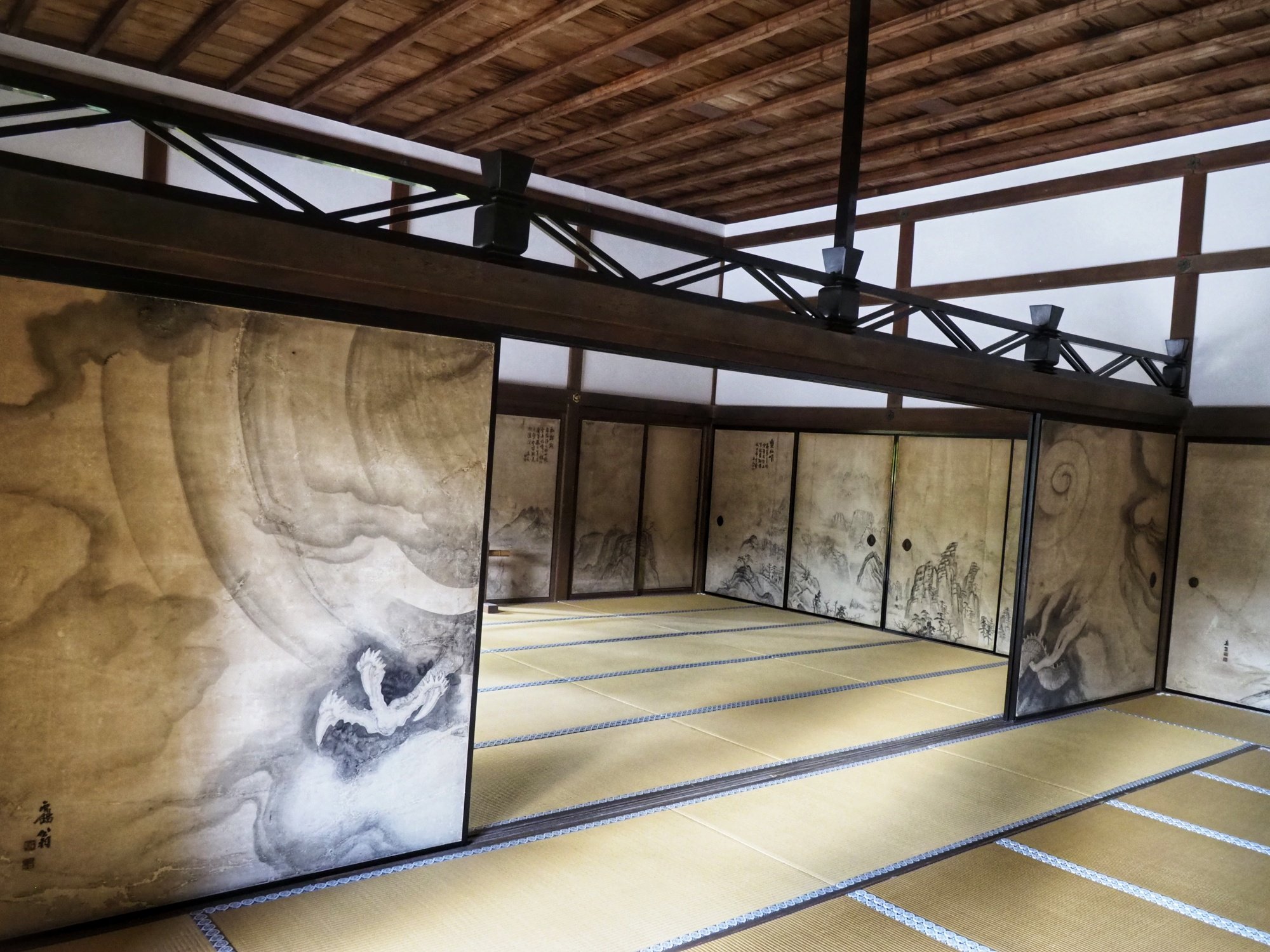 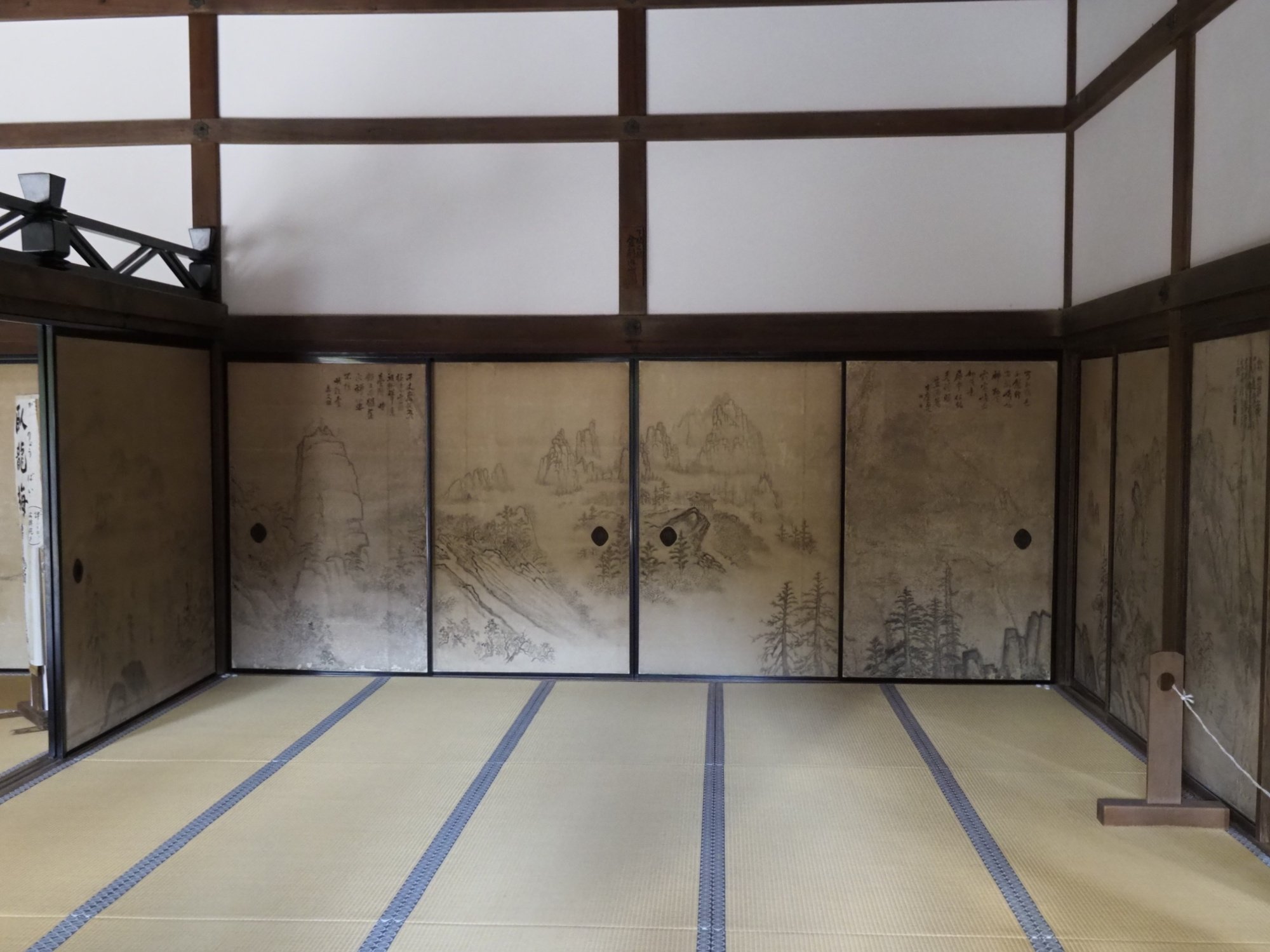 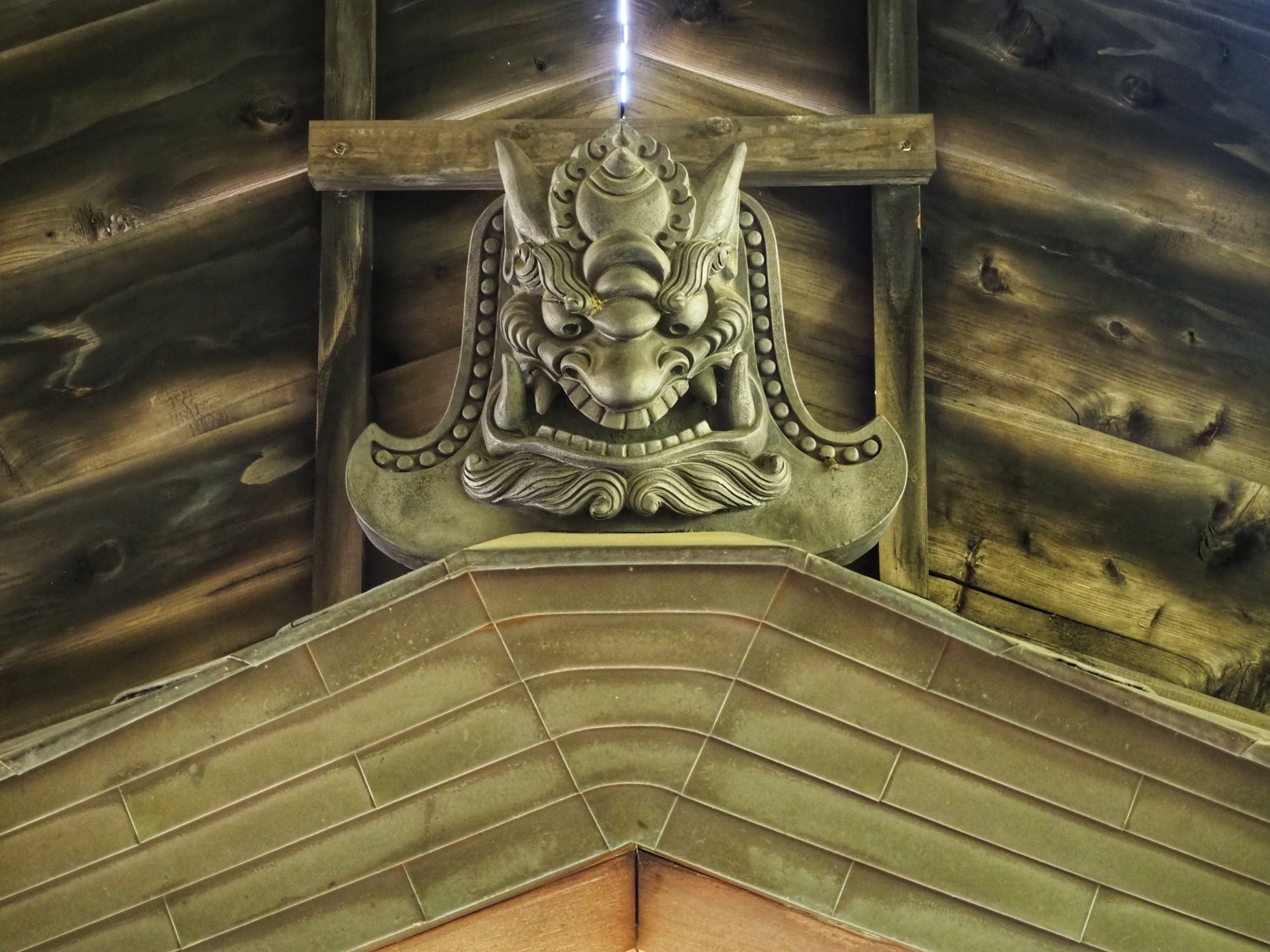 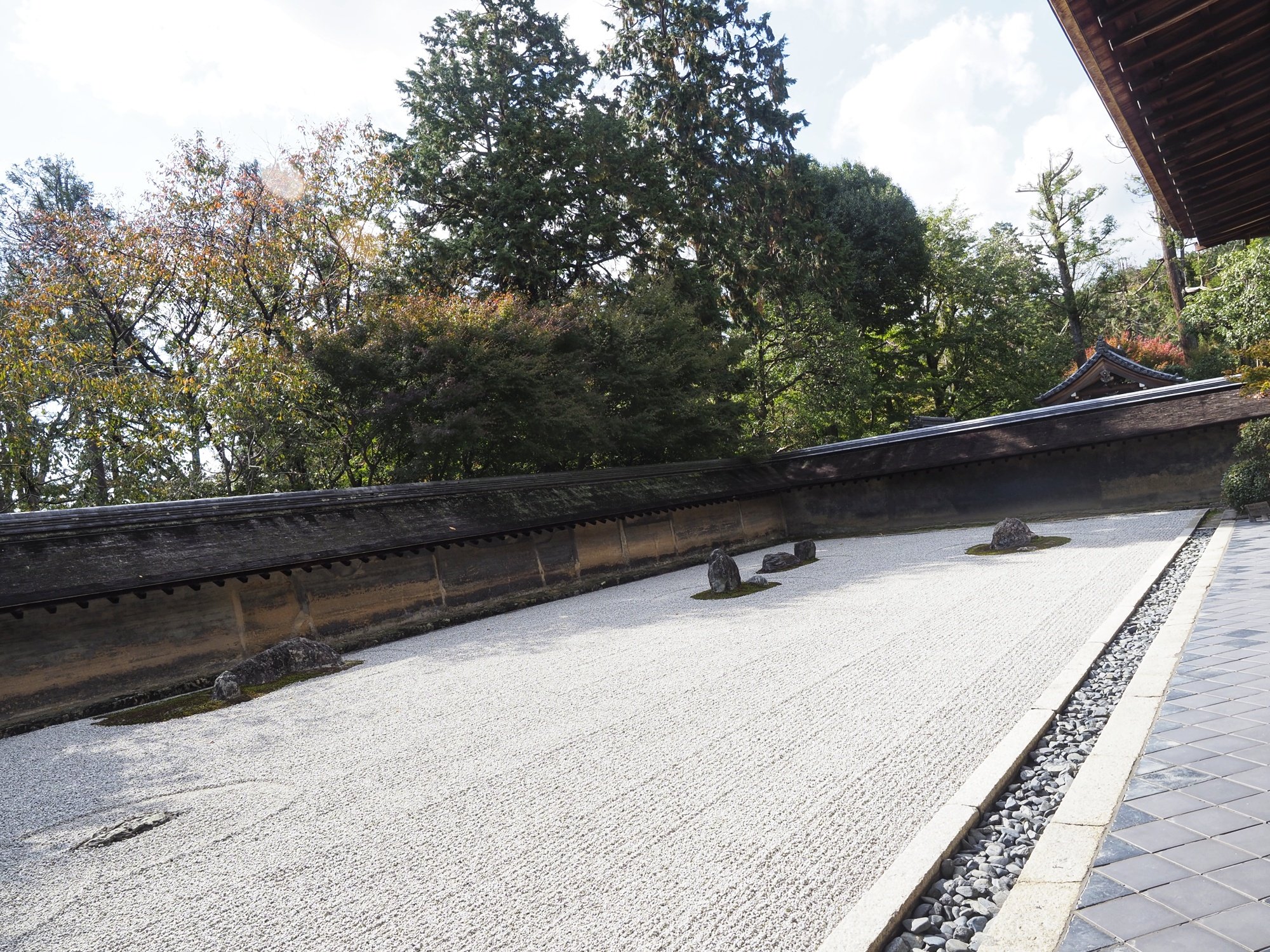 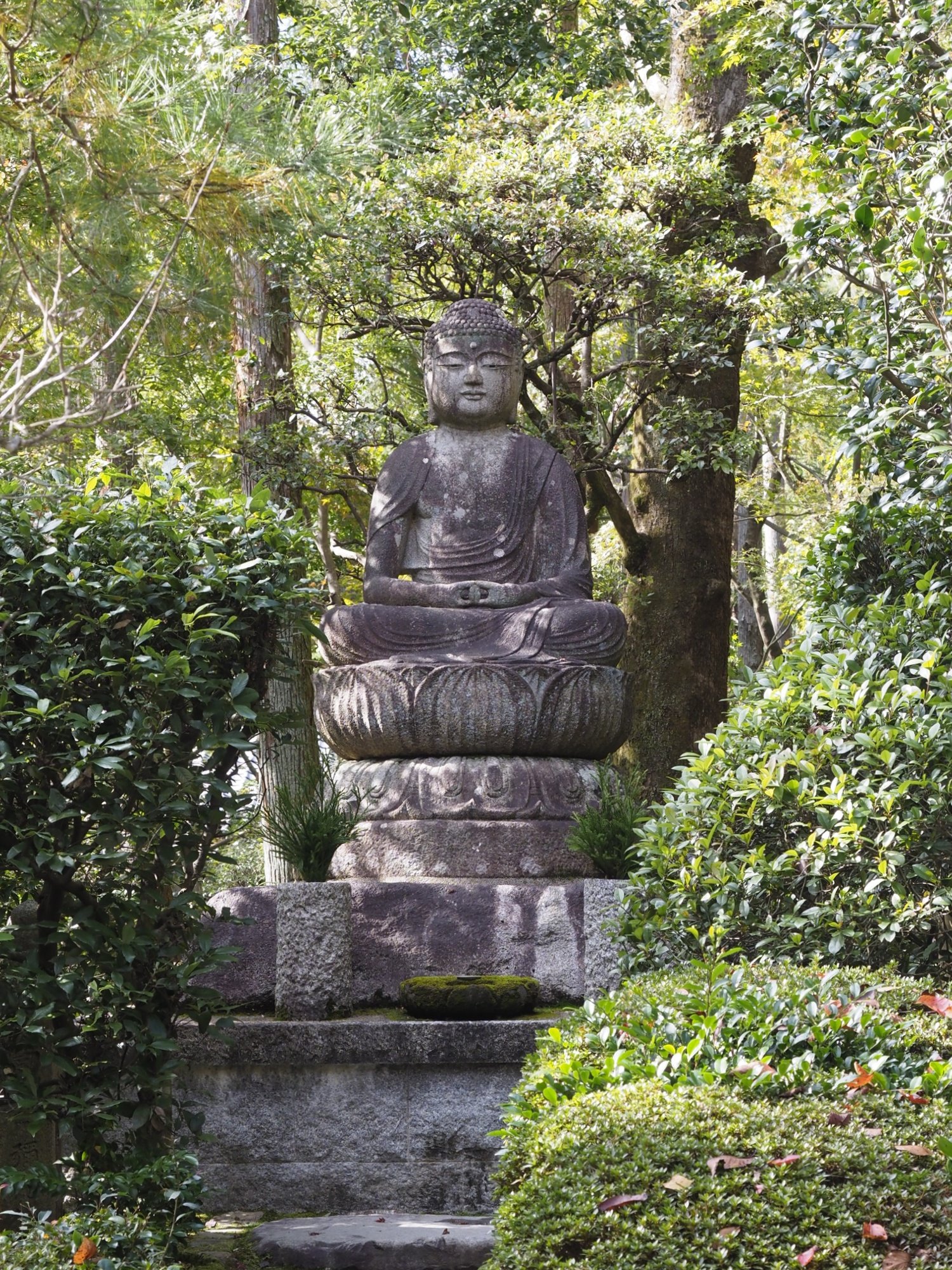 No matter where you are seated to meditate you will never be able to see all stones placed in the garden. Which is a message in itself. The tapestry drawings inside the temple are quite intricate as well. The lake with some of the leaves already turned red provided for a nice way out. 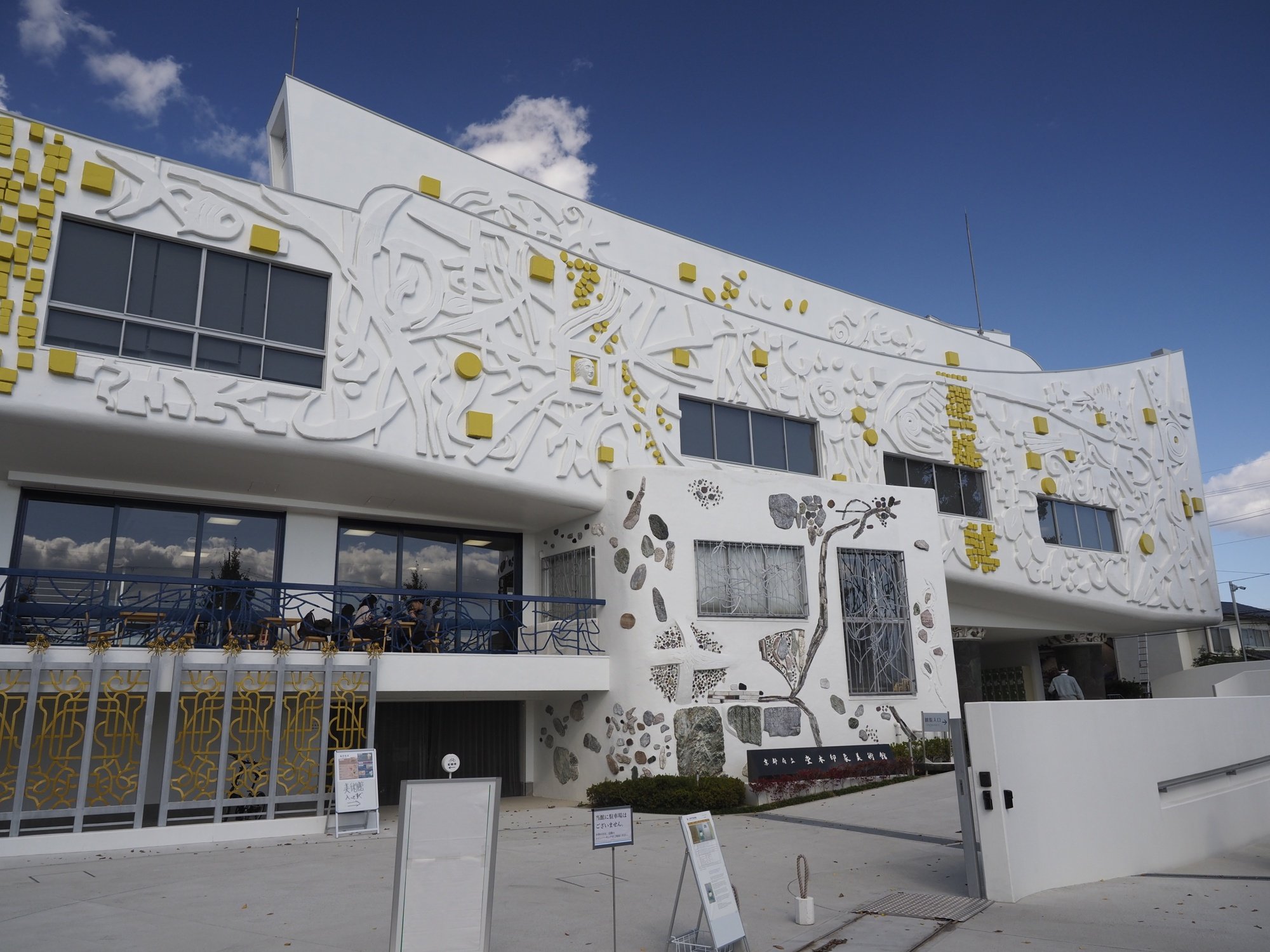 The way into the town proper which of course was by bus again and took what felt like ages was cramped. Good for those who managed to snag seats. The all you can eat pizza was an interesting experience. Not so much because they provided new tastes (pizza was very crispy with loads of cheese but the usual toppings, some of them sweet). But they did provide some other fare like spaghetti and meatballs or baked potatoe slices as well. 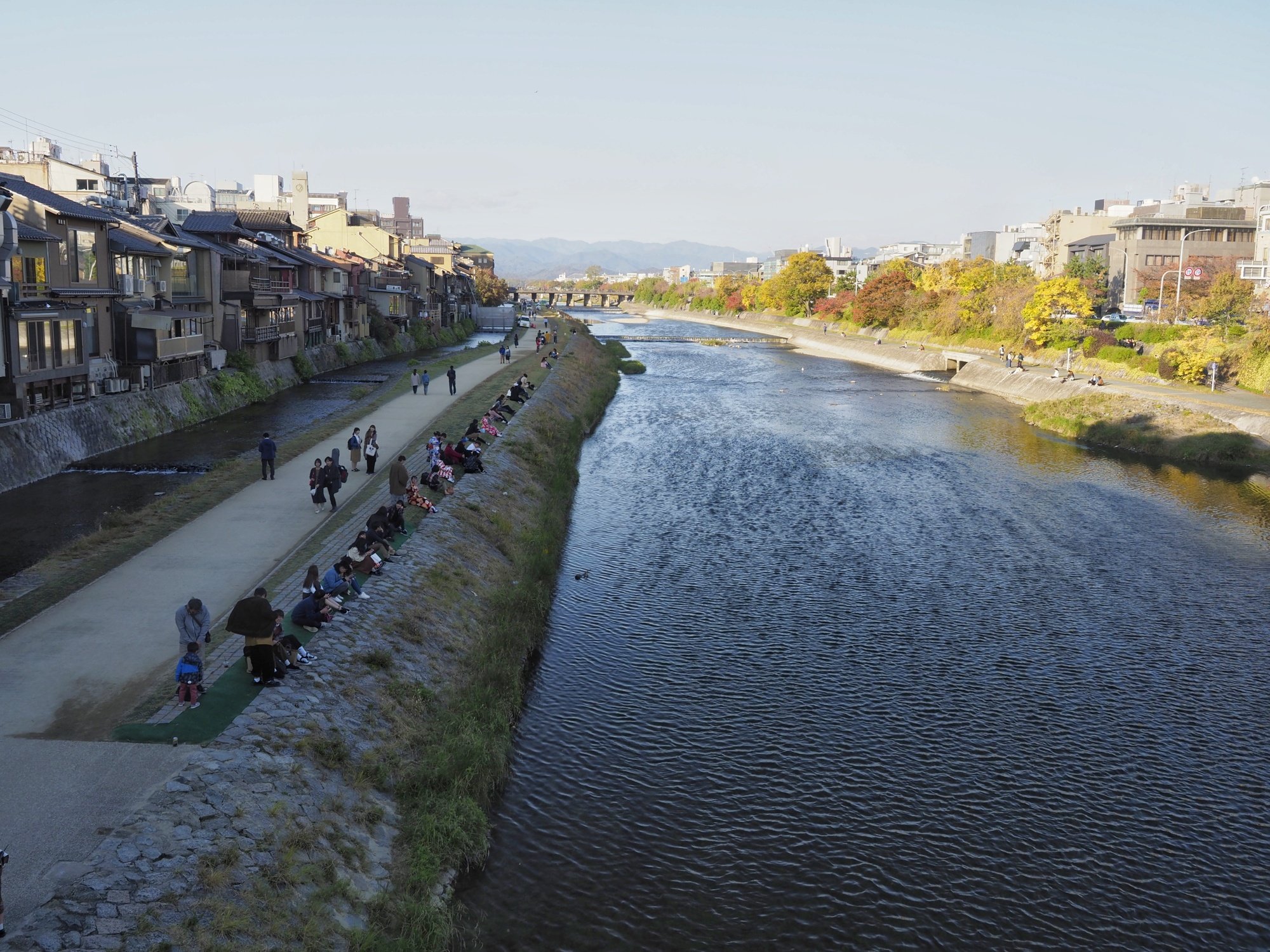 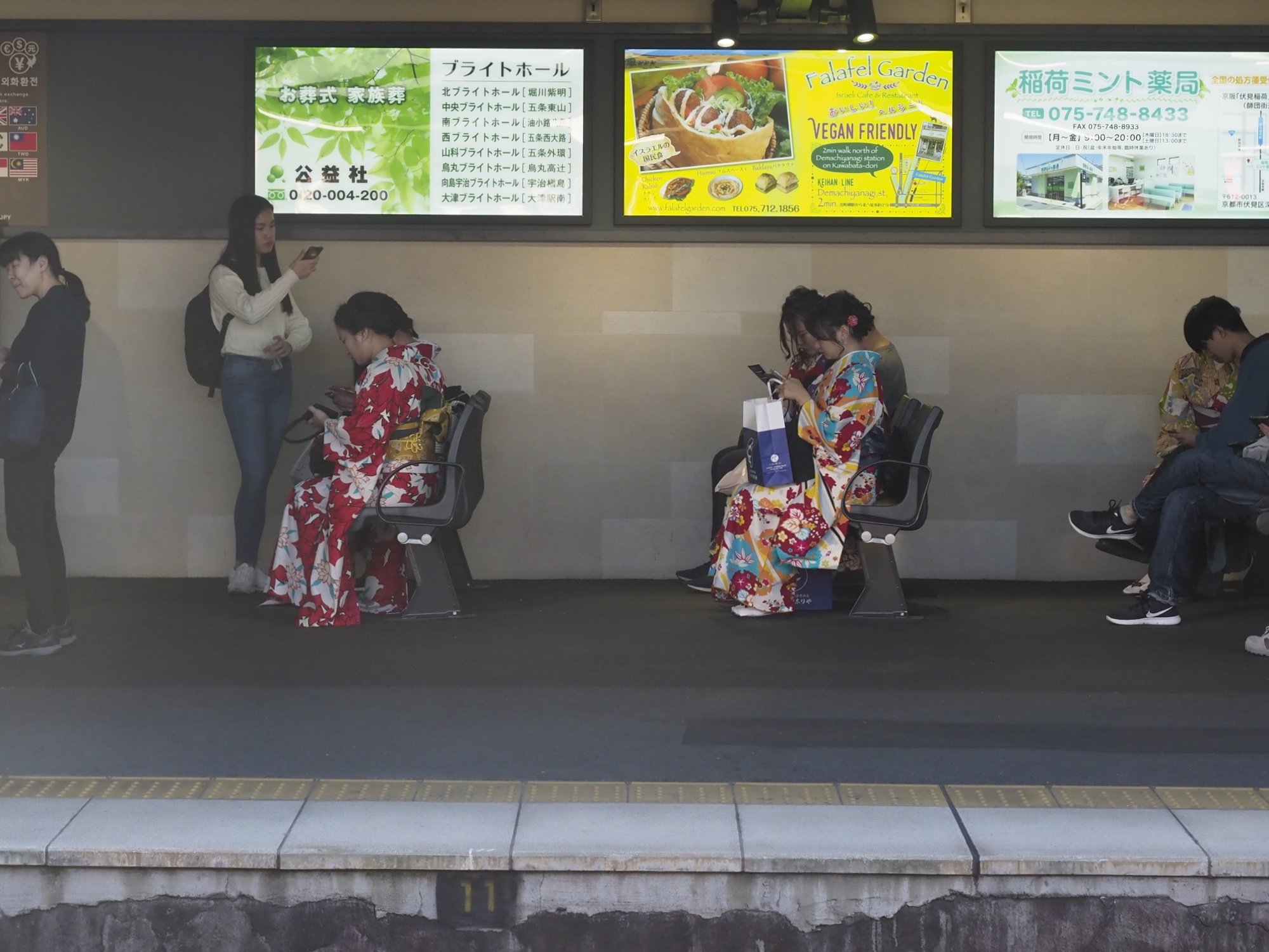 After a short pointer to the old town the next destination was Fushimi Inari. And not only did you have to walk the gauntlet with street vendors all around but it was packed with tourists as well. At least here you had some sprinkles of colorful (rented) kimonos to provide some enjoyment for the eyes. The lower shrine area was able to cope with the masses quite well but the Torii where walking in line with people in front and behind you all the time. So if you want to get an empty picture it will take some timing. The fox acting as a messenger between the rice good and humans is not only worshipped at this shrine but at other shrines on this mountain. 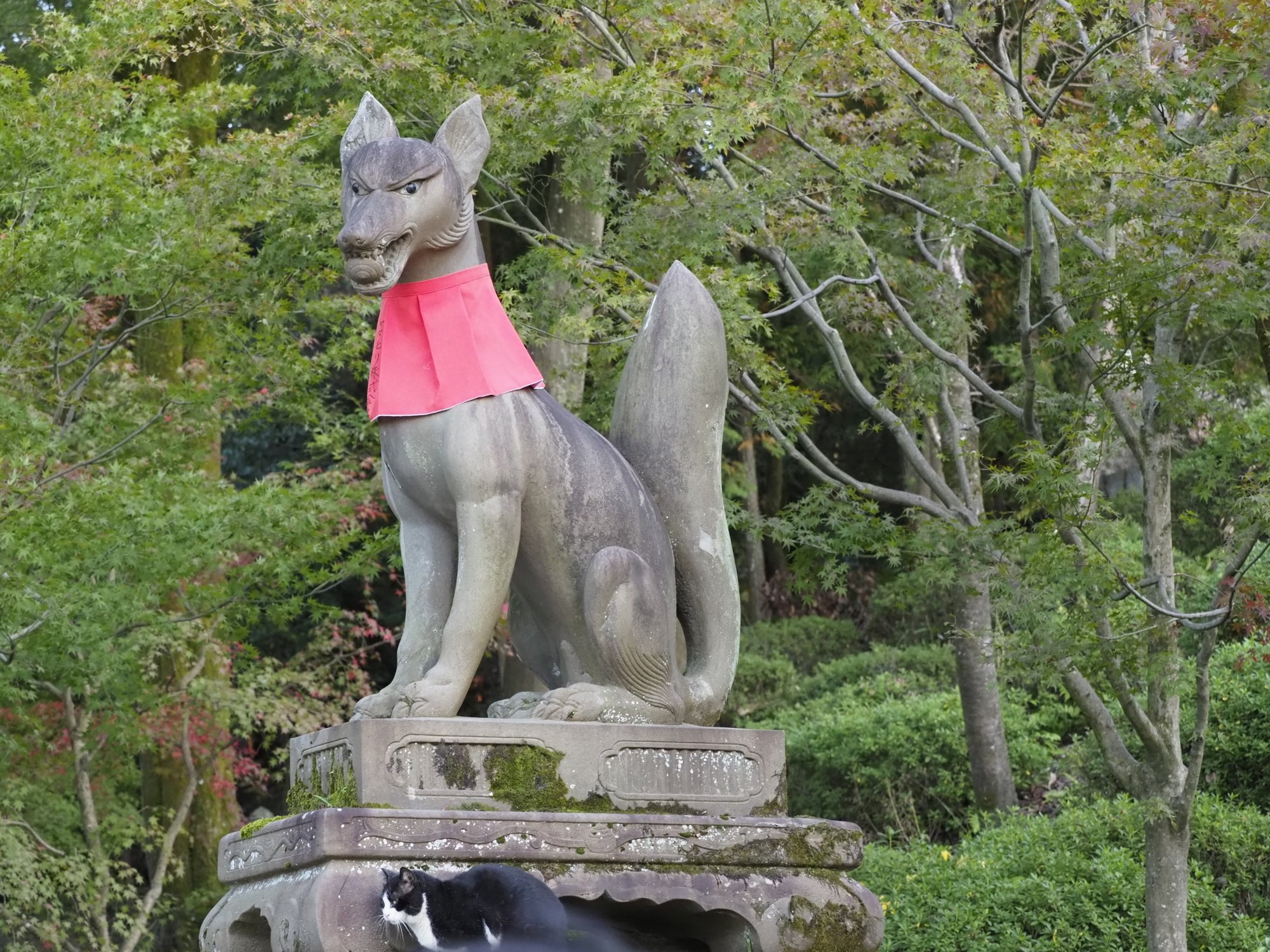 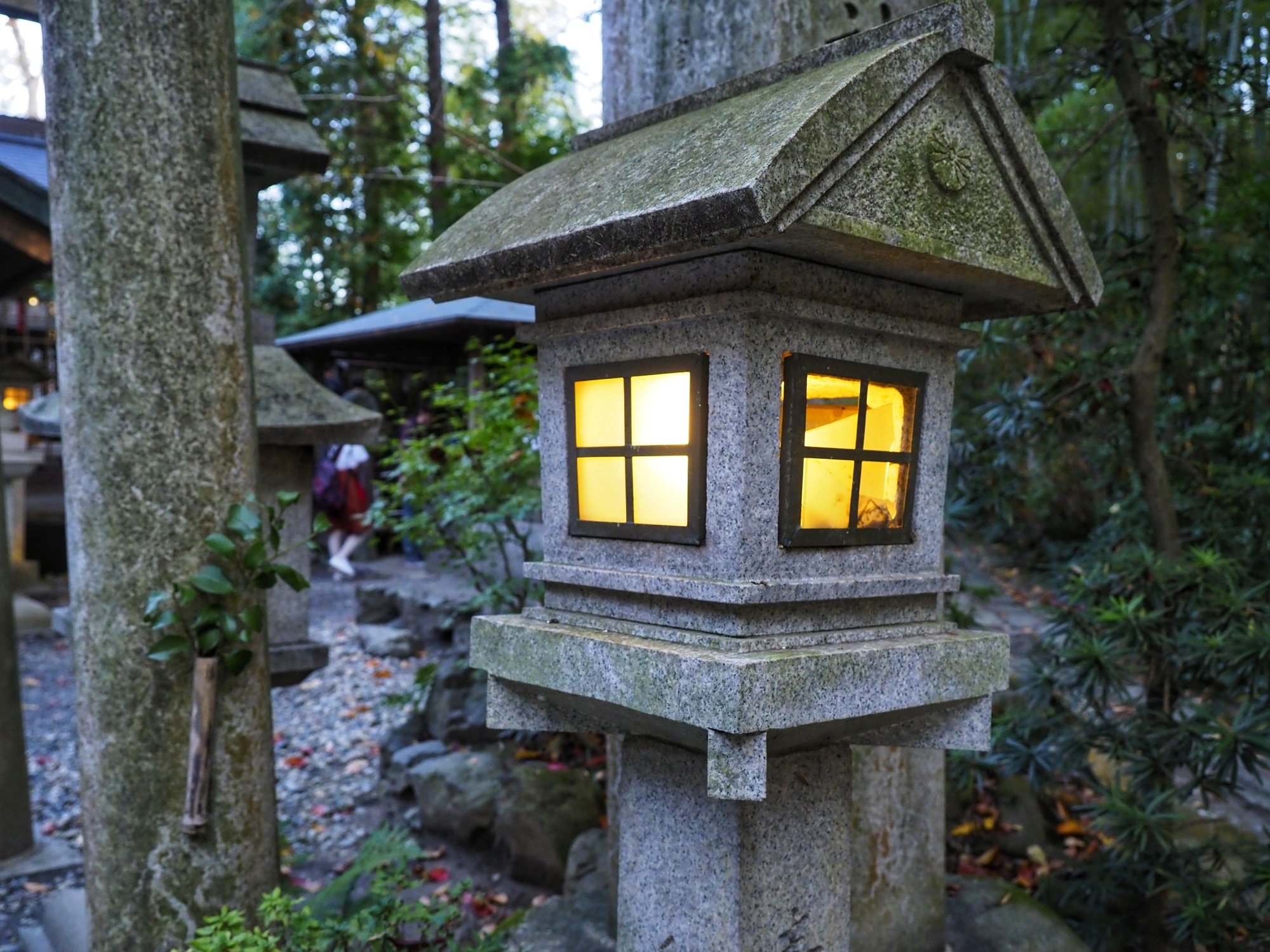 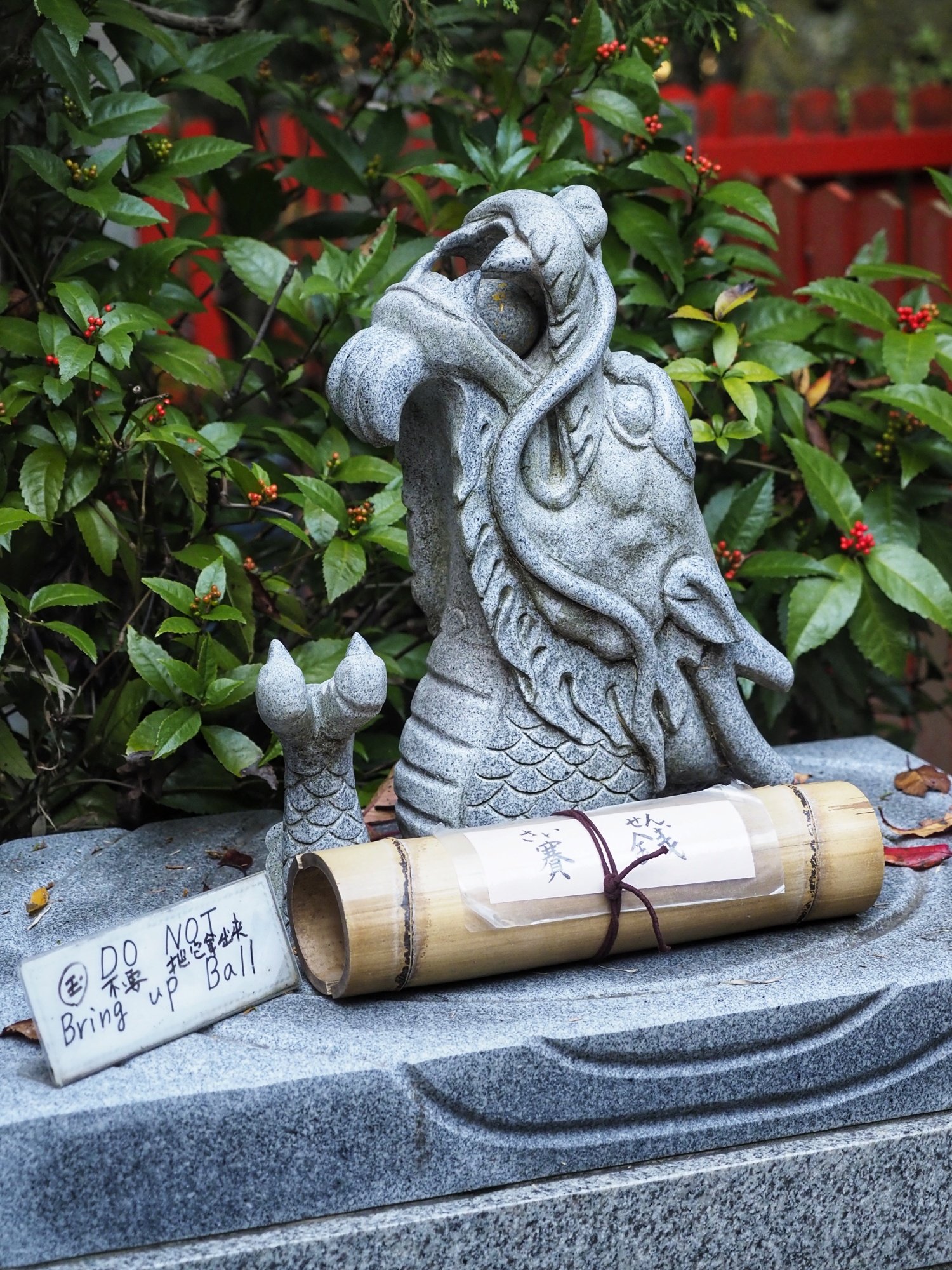 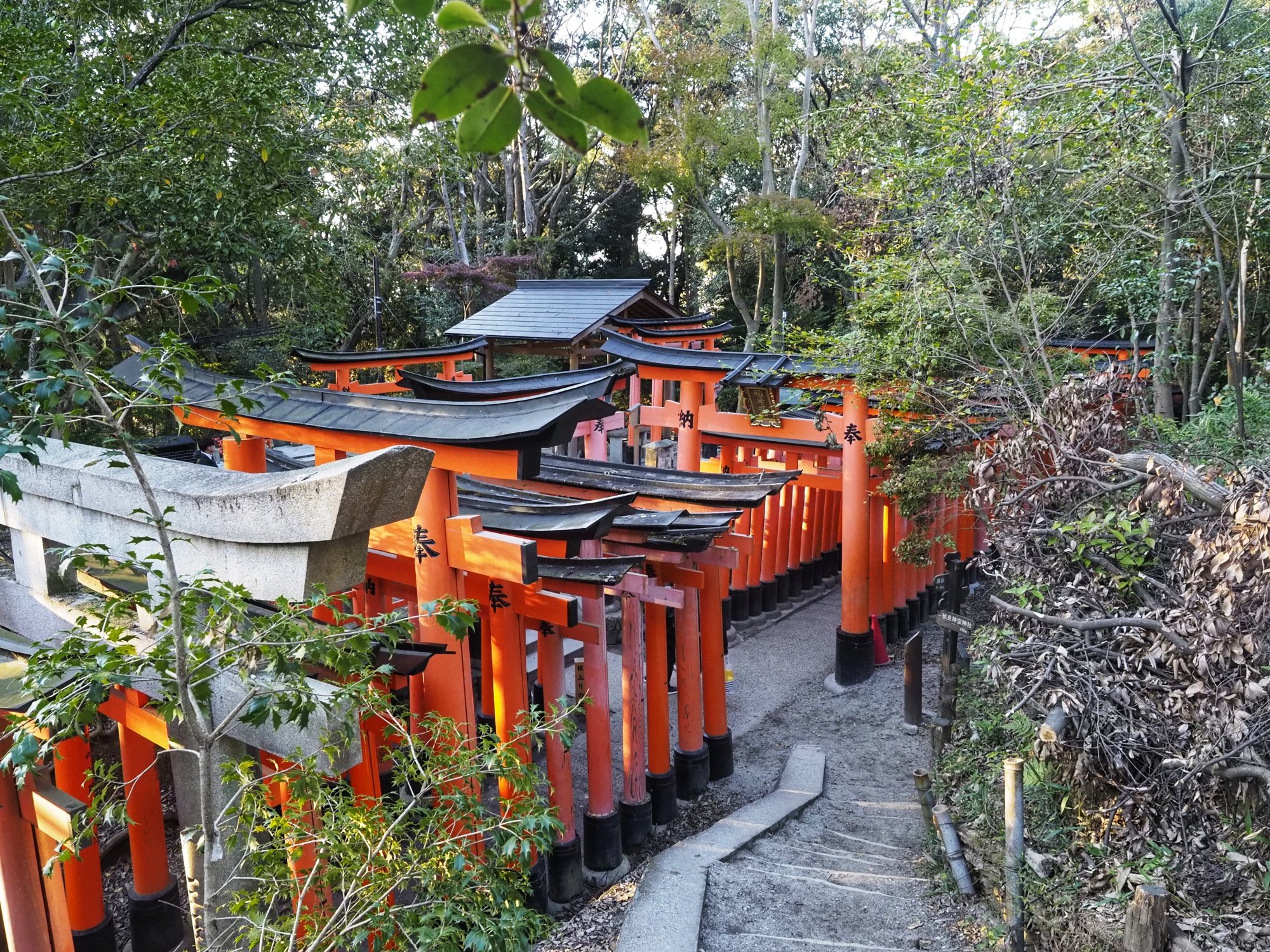 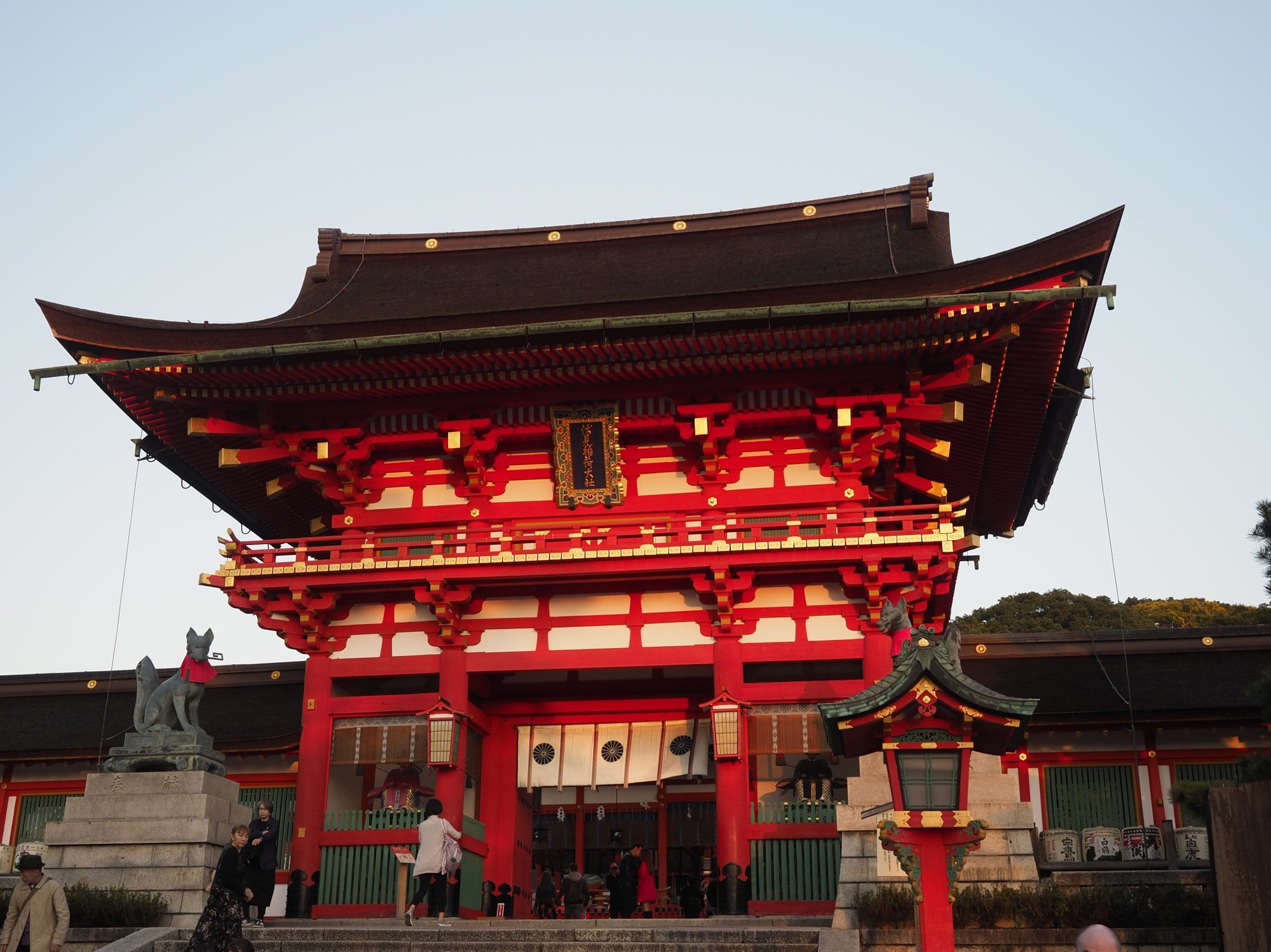 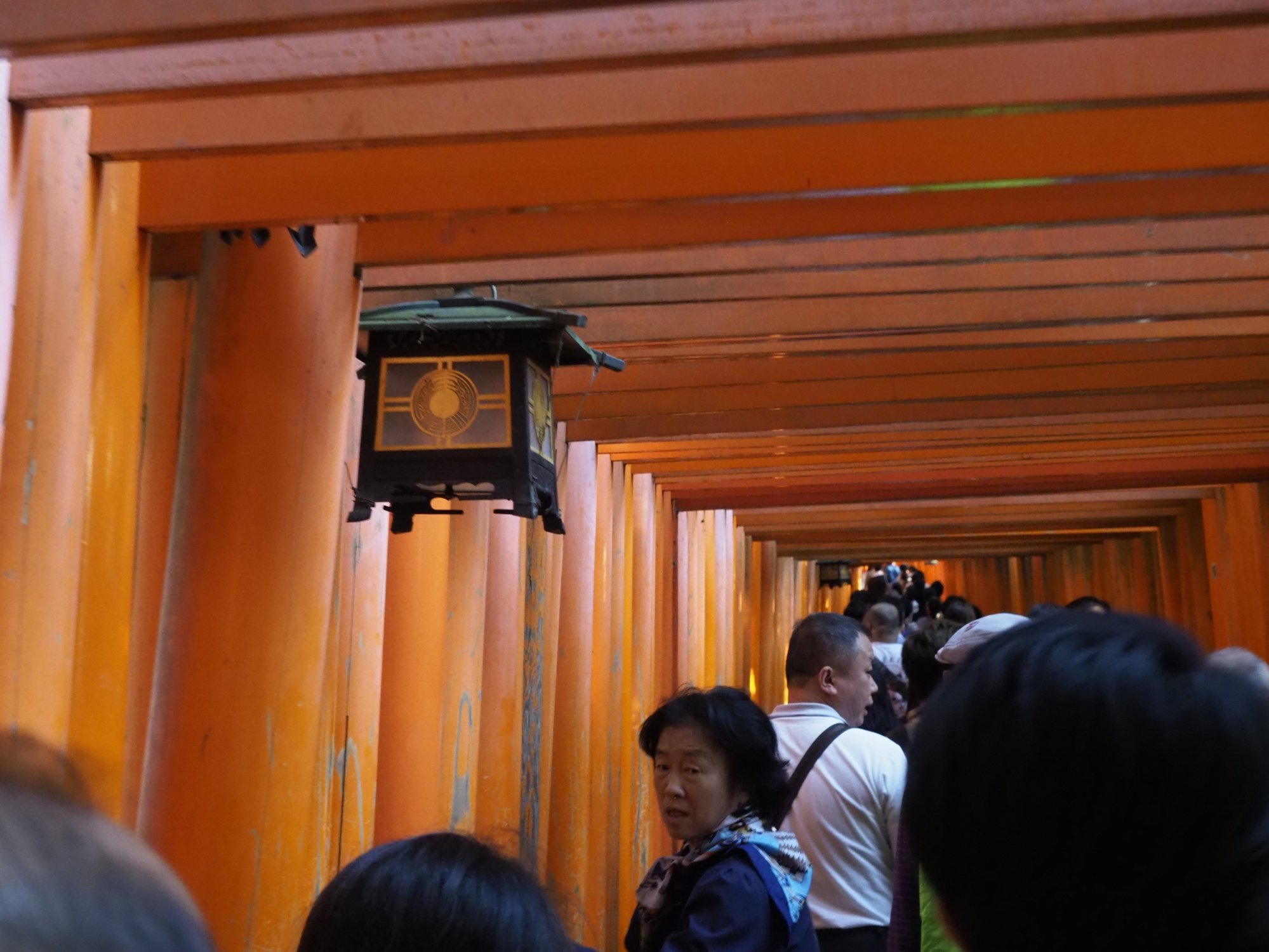 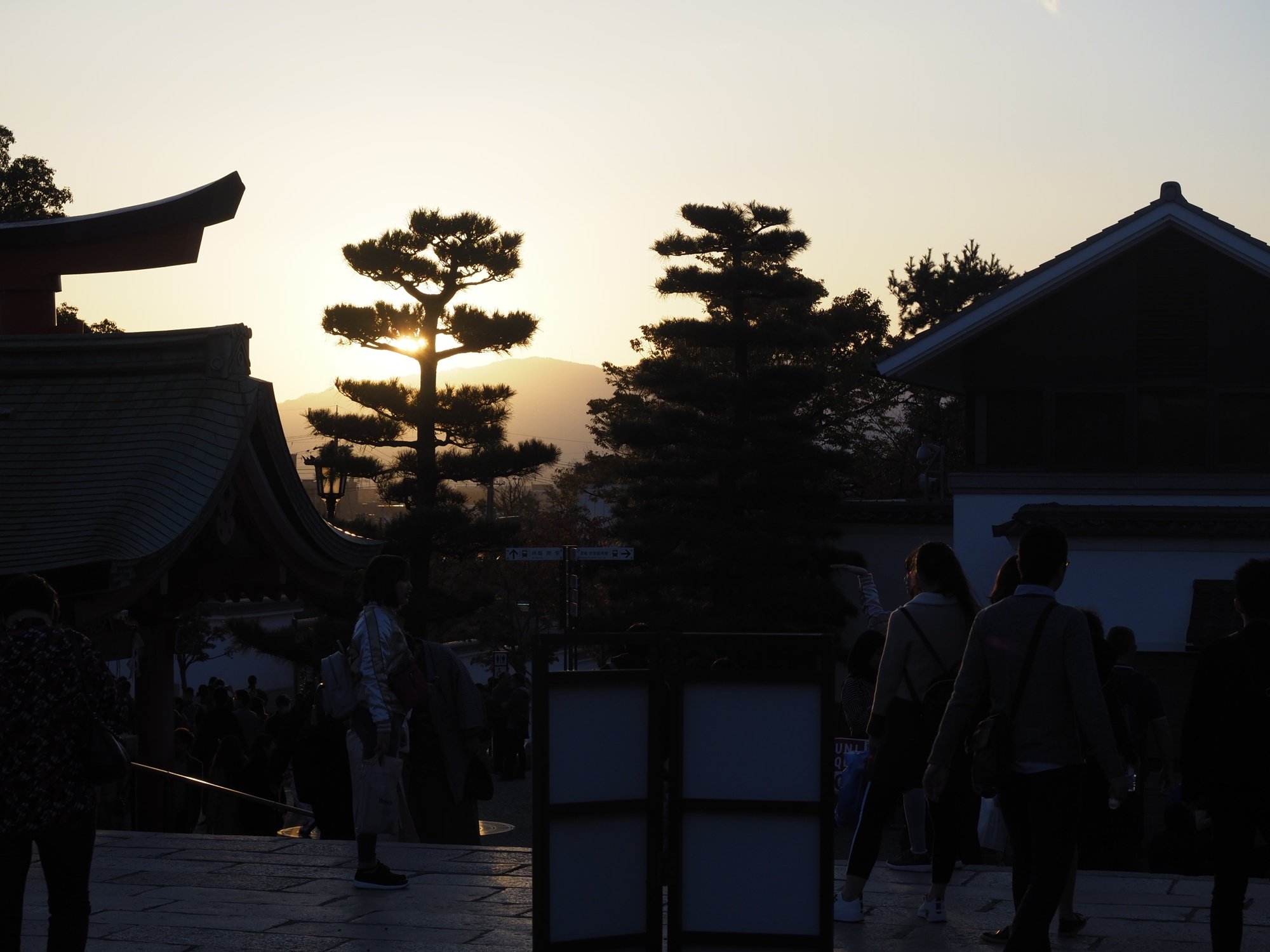 Those might be smaller but not less impressive. The emperors rice field was closed unfortunately.

Our last stop was the train station of Kyoto which is multiple floors high and presents a very nice view of Kyoto from the top. The way up is via escalators and free. From the platform it is even possible to see all the way to Osaka on a nice day. Just remember to bring jacket. It’s quite windy up there. 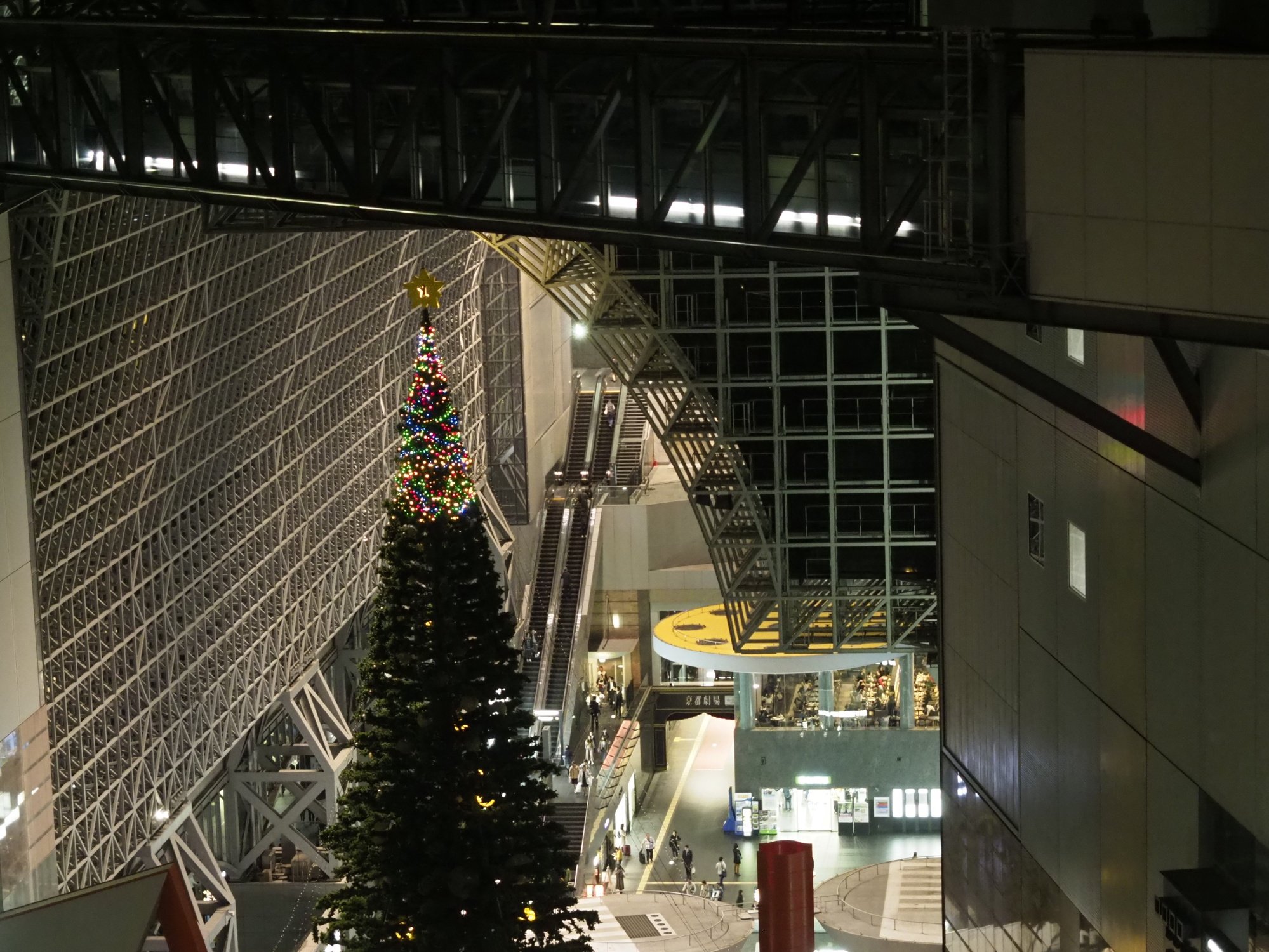 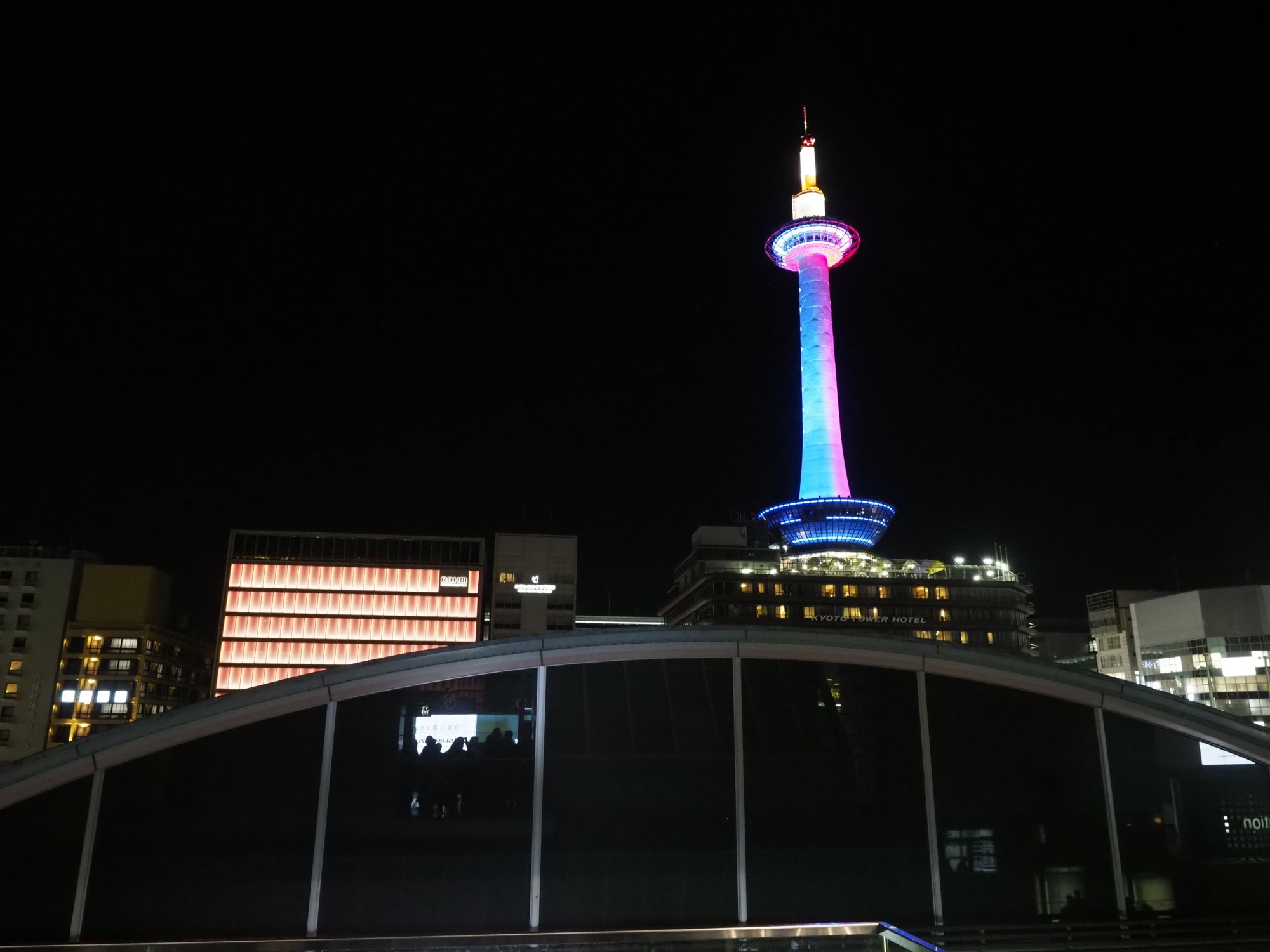 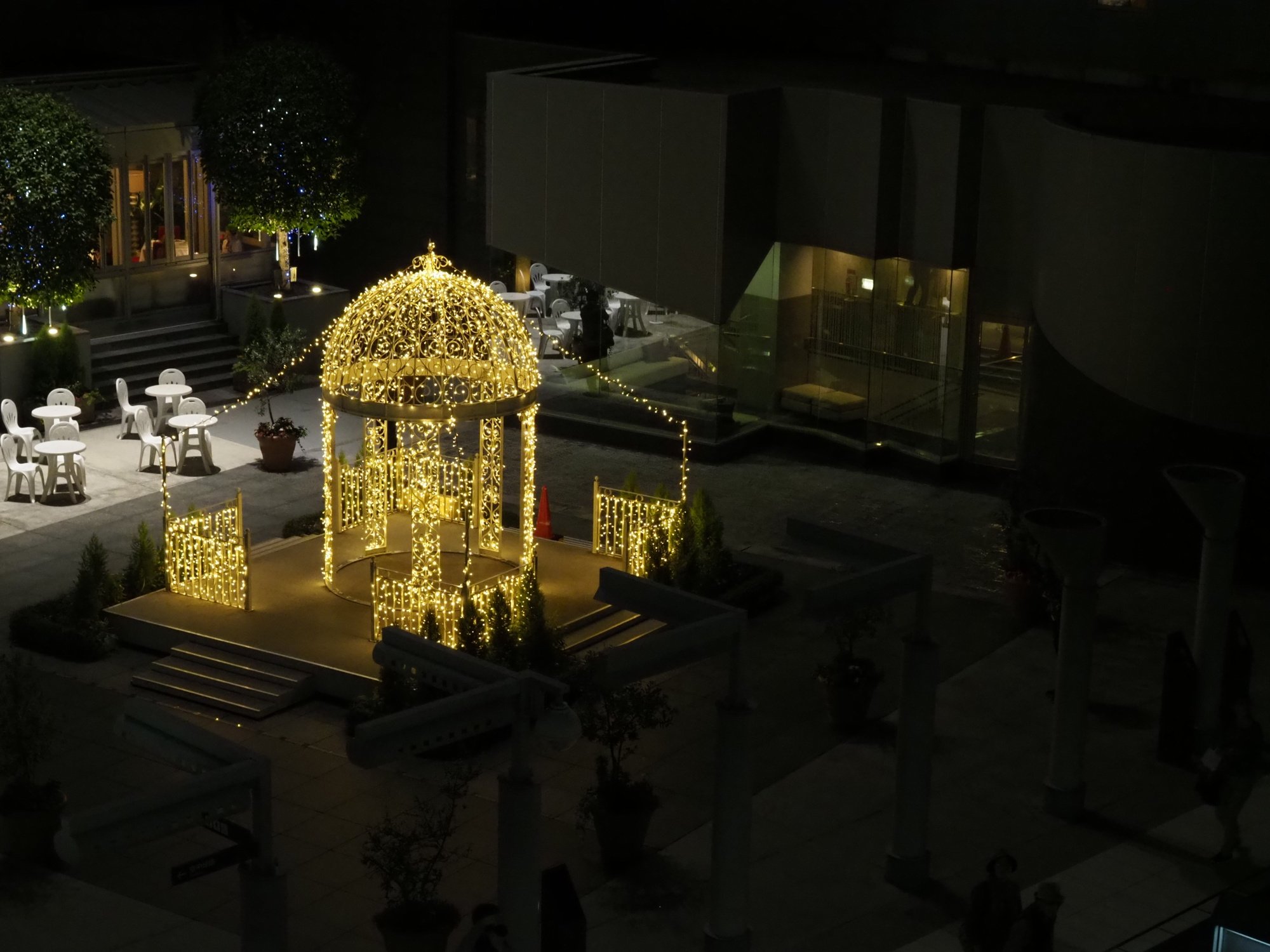 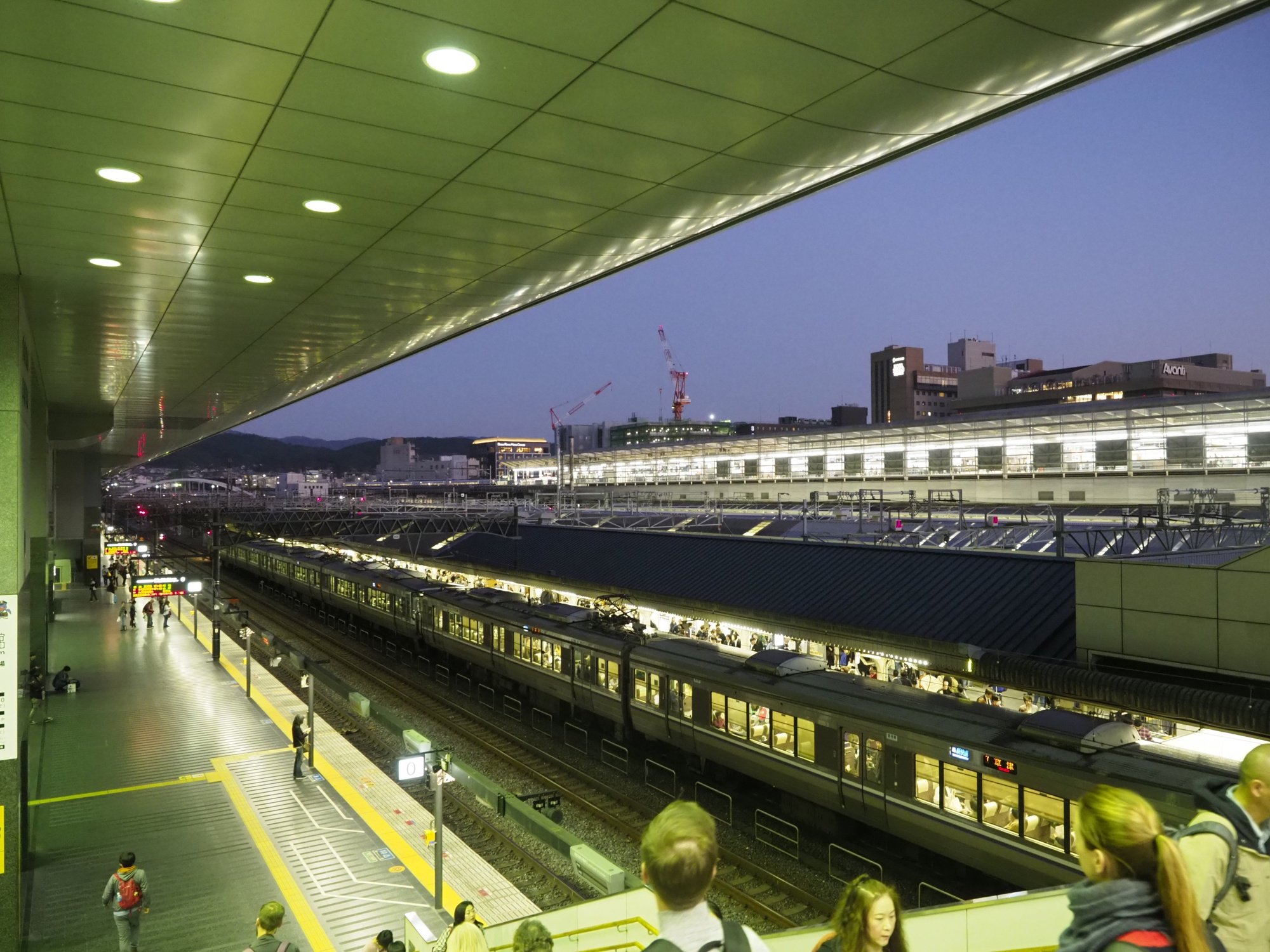 At night there is to much city lights to see that far I did not have that pleasure. Instead lots of light to compose your own pictures. Even on top of a christmas tree if you’re so inclined.

Dinner was Giosa again. This time with sweet sour pork for me.