Okinawa – the last defense before the main land

In WW II Okinawa was decided to be the foothold for the American invasion of Japan. Today’s trip was about the invasion of Okinawa and the effect this had on the civilians. Especially as the Japanese command had decided that everything that delays the enemy to reach the main land was a good fight.

The weather was again in a bad mood and it did rain cats and dogs when our taxi (same driver as yesterday) picked us up a half past eight. Our driver had even organised umbrellas for each one of us.

First we visited the underground headquarters of the navy. This bunker which went over 20m deep and the tunnels had a length of 450 m. It was built by navy pioneers with the most basic tools and was designed to withstand the bombs and shelling of the US Navy. Up to 4000 soldiers where in here to organize the defense of Okinawa. That many people meant that people had to sleep while standing because there just wasn’t any room. 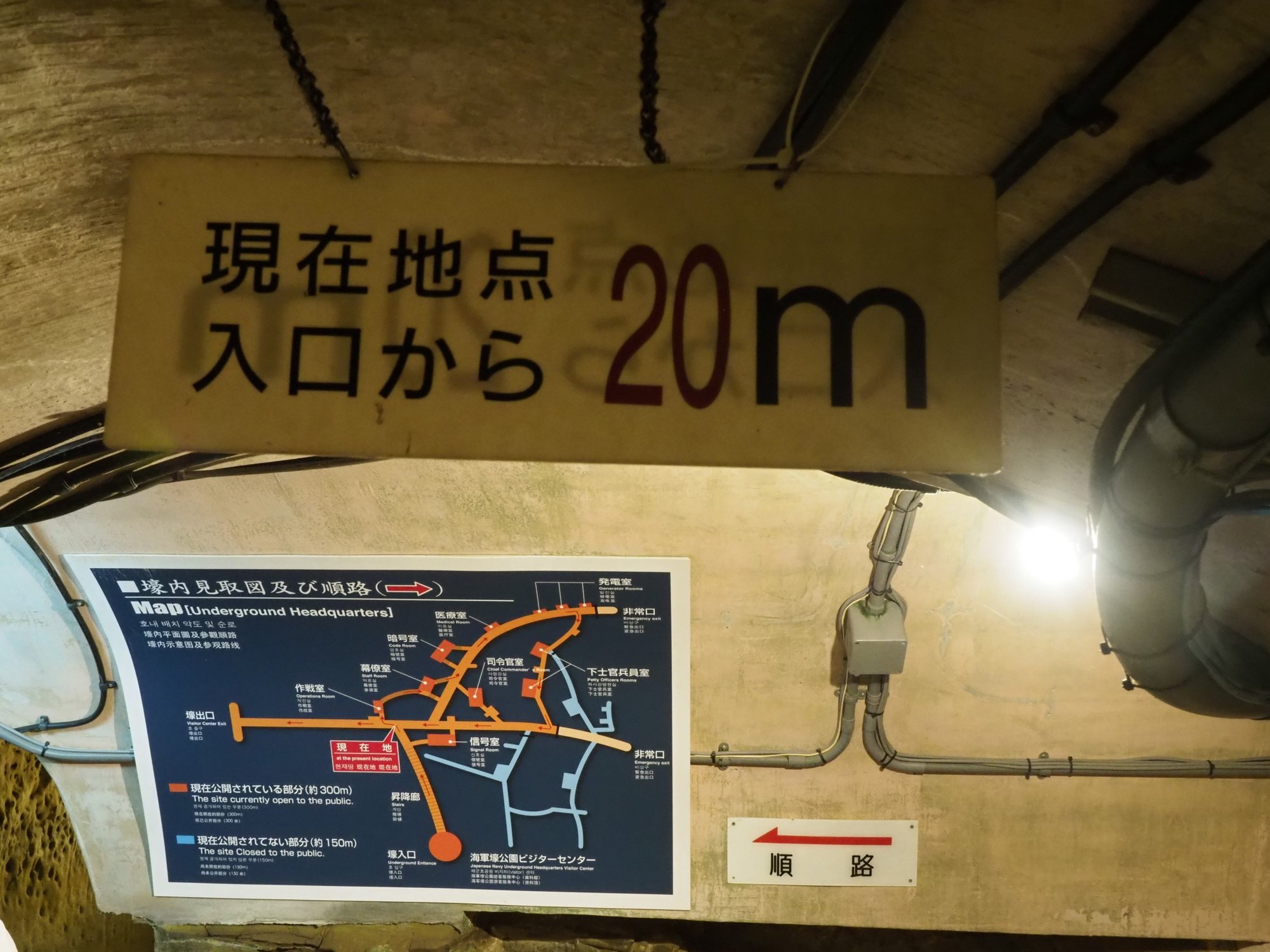 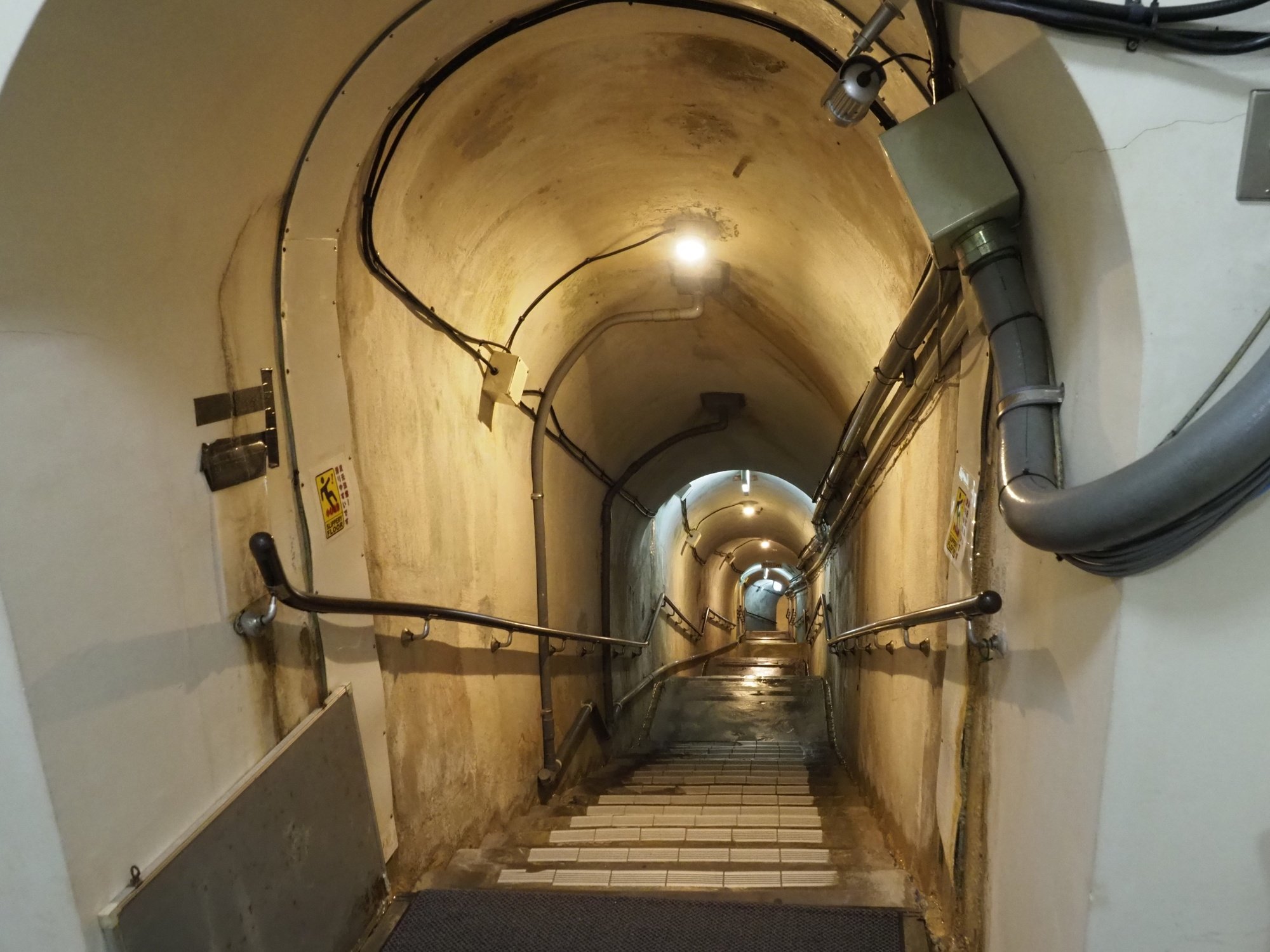 This also was the place where rear admiral Ota and his highest ranking officers committed Seppuku. As his last official act the rear admiral sent two telegrams. One of them with the order to his troops to fight until the end and not to surrender to the enemy. There was no communication about any surrender and/or protection for the civilians between the Japanese and American commanders. The other telegram – which was part of the exhibition he made sure to highlight the suffering of the people of Okinawa and ask for them to be considered for special help after the war. It might be important to know that civilians where conscripted into special organizations to help in the war effort and had to build defensive positions, act as couriers and still find something to eat while the shelling did not at all distinguish between military and civilian targets. 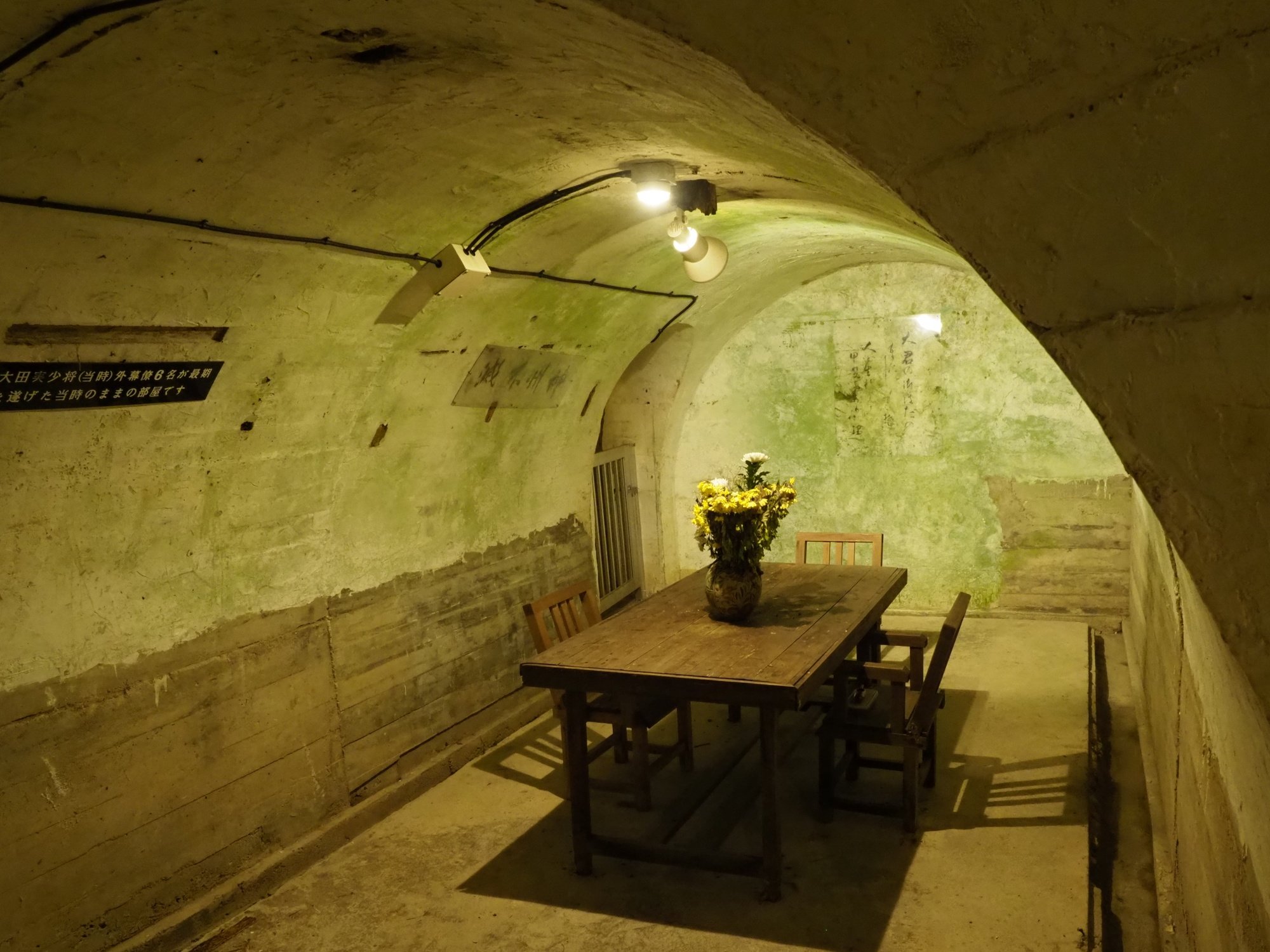 We were only able to visit part of the tunnels including the commanders room, communications room and the the petty officer “quarters” as well as one room still sporting the holes in the walls from a handgrande used for suicide. Special ambience was due to the rain hitting the roof at the exit which echoed down.

After this introduction into the hell of war our next stop was the Himeyuri peace museum. This museum was only built in 1989 and renovated in April 2004 when the methodology of the exhibition was updated as well. This museum remembers the 222 pupils and 18 teachers of Okinawa Normal School and Okinawa First Girls High School. On the 23rd of march 1945 they where called to support the troops. Mostly as assisting nurses and to bring food and water from the central distribution points and to carry the medical waste out. 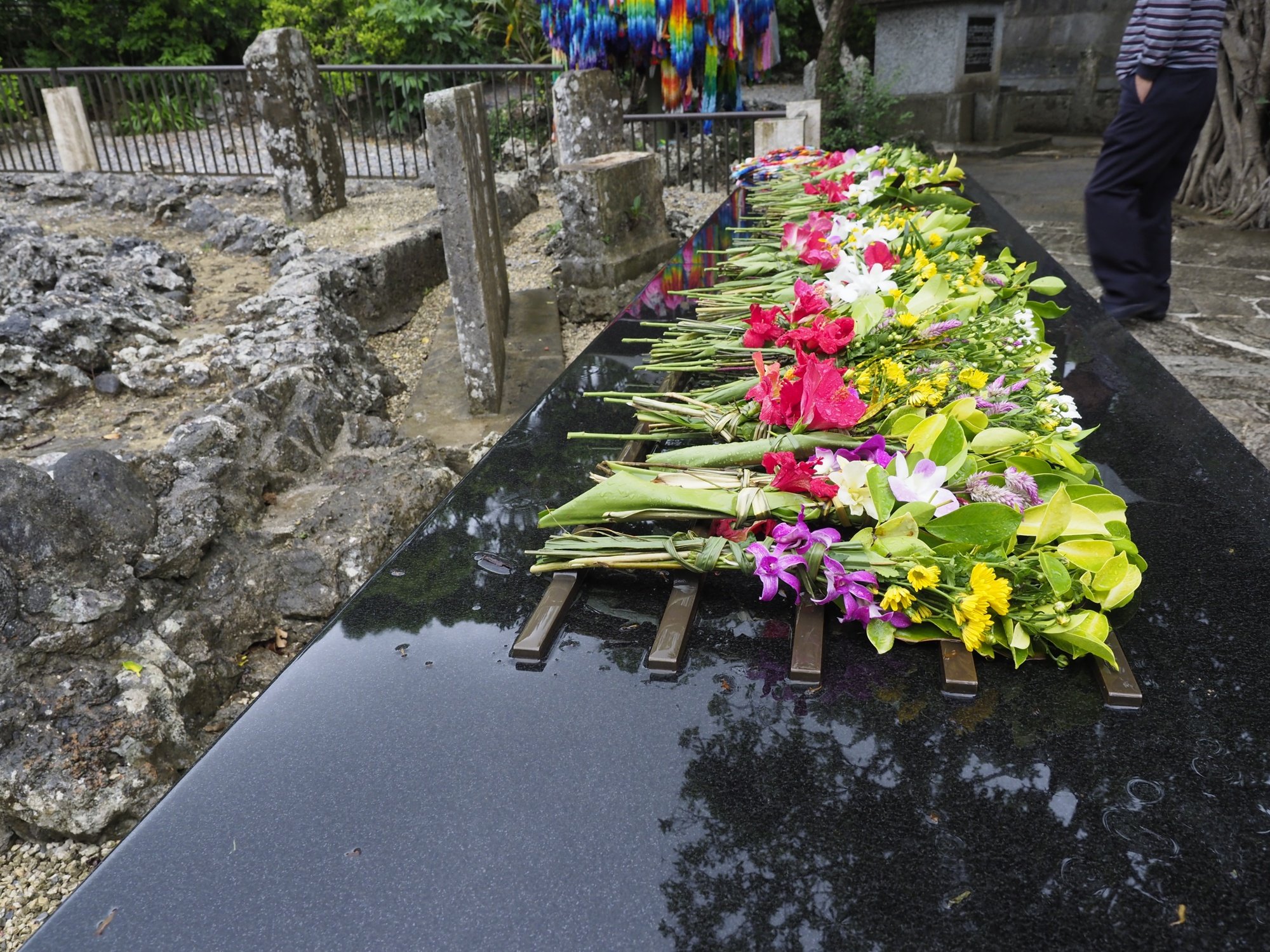 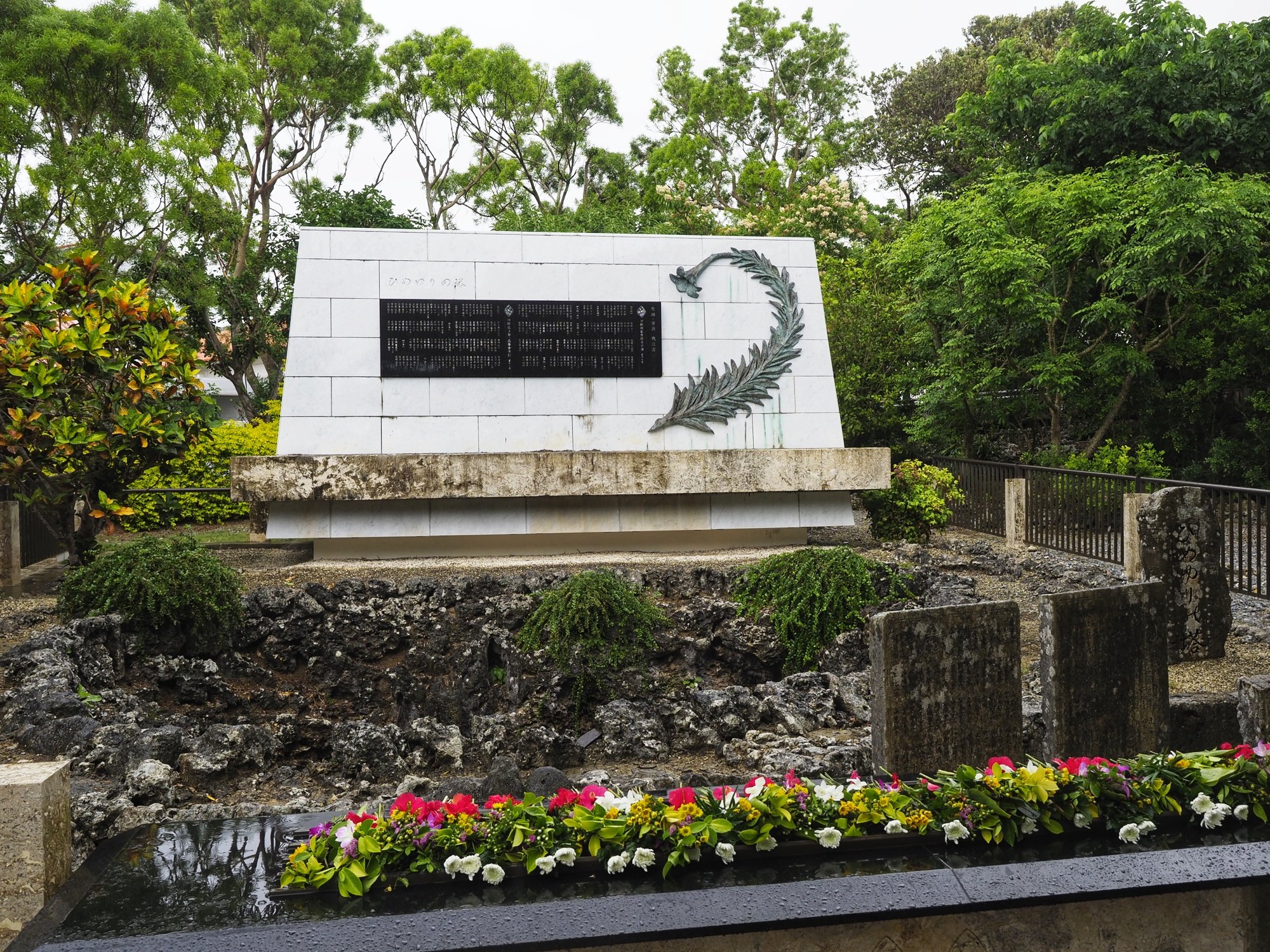 Here the story is told how young women (16 to 19 years old) went to what they believed to be a short term extension of their schooling in a regular hospital with a red cross flying on top. But actually they where sent into whatever natural caves could be found and repurposed as place to hide the wounded. Their reality where dirty holes in the wall, not enough supplies to care for the wounded. People begging for water, food, care or just plain death. The patients where operated on without anesthetic no matter if it was a flesh wound or an amputation. There where not enough bandages to change the dressings, maggots and tetanus where the daily companions. Some soldiers lost their mind in the perpetual shelling and darkness. 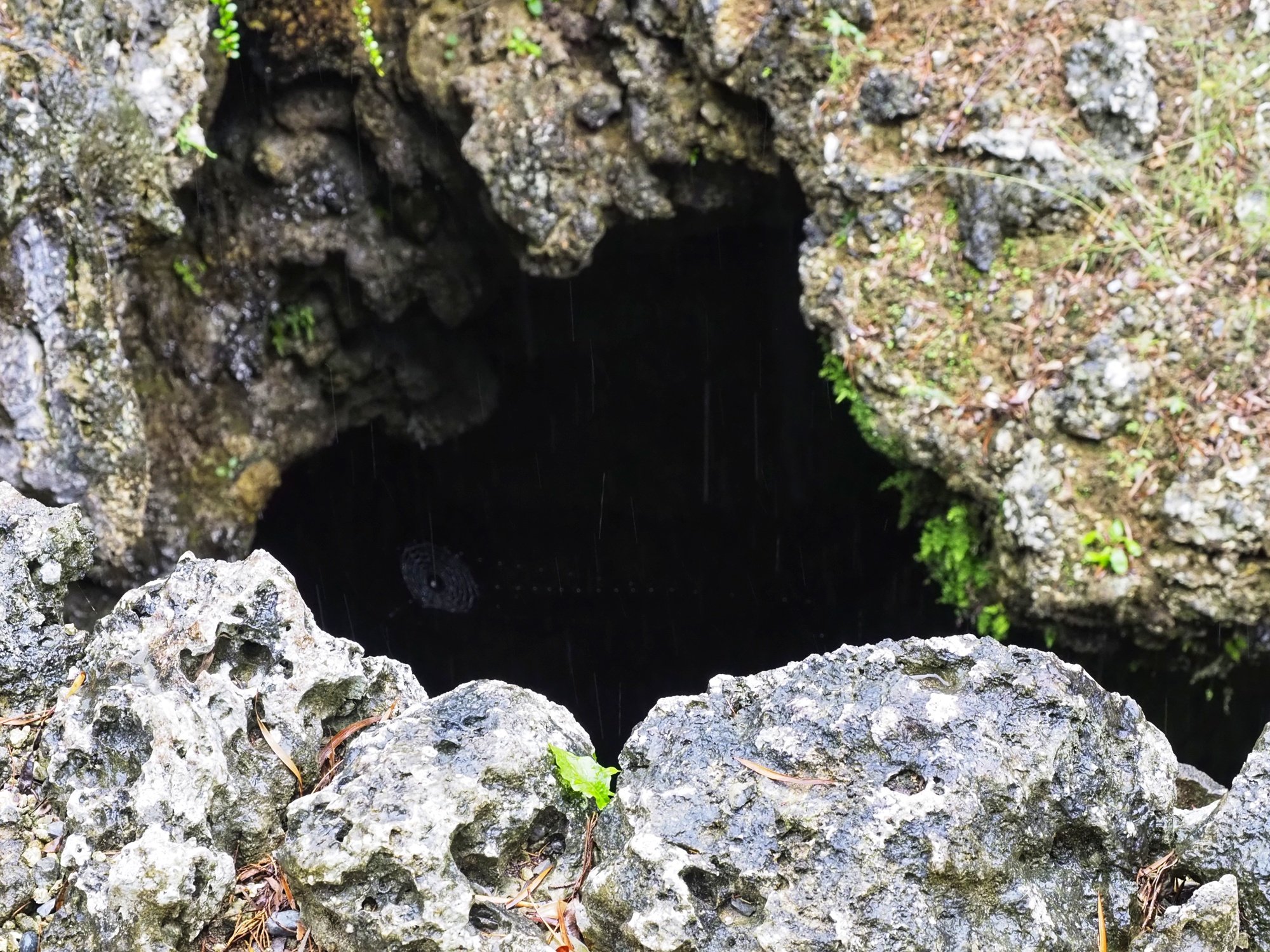 But that was only part of the hell these girls went through. It was their job to get the rice and messages from the central distribution points. The rice was heavy, the container hard to carry and the paths muddy. Dropping the rice would mean no food for the cavern. Not to forget all the bombing and shelling going on at the same time. Many of the girls ended up as patients themselves. Be it because one of the bombs hit a cave or that they where hit outside.

On the 18th of June the army retreated and the units the girls where in where disbanded. The girls where only told to leave but not what to do or where to go. The more severe wounded where just left behind. Indoctrination of the last 60 years and fear of the atrocities the enemy would inflict on whoever was captured led to the girls who had made it so far to try to kill themselves. Be it by jury rigged hand grenades they where handed or stole from corpses or by jumping from the cliffs. Being captured seemed not to have been an option for them. The girls accounts that have been found (or made afterwards) are on display in Japanese and translated to English as well. This is one of the most touching parts of the exhibition. 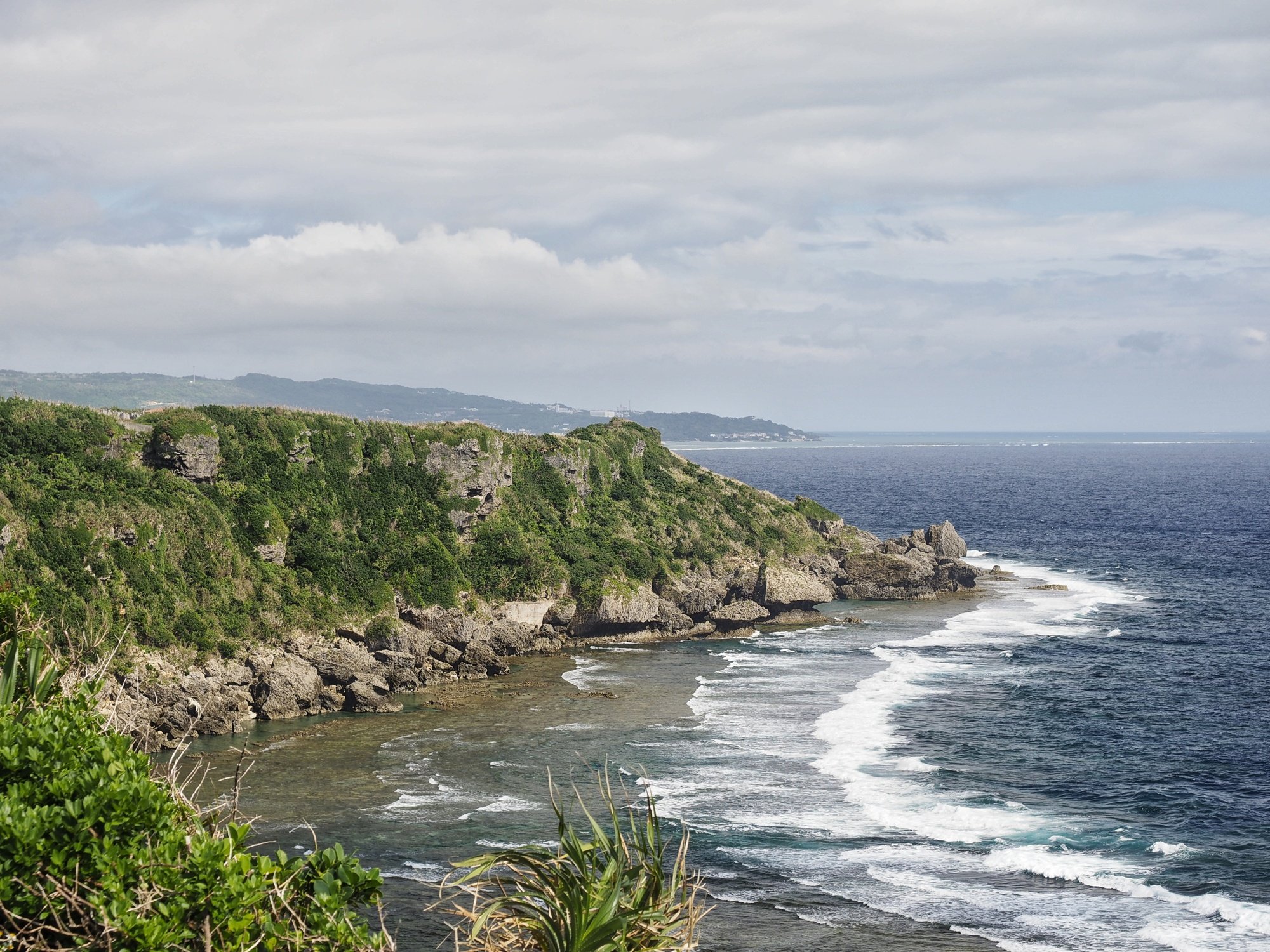 Only 13 of those 240 women from the schools survived the war. A lot of them because they where unconscious when they where detected by the American soldiers.

To give the souls of the 240, 000 dead Japanese on Okinawa (as well of the American soldiers) a place to rest Heiwa no ishiji (corner-stone of peace) was built in 1995 at the 50th anniversary of the end of the war. On the 116 stones of the memorial all the names of the known dead are engraved and set up like a fan. 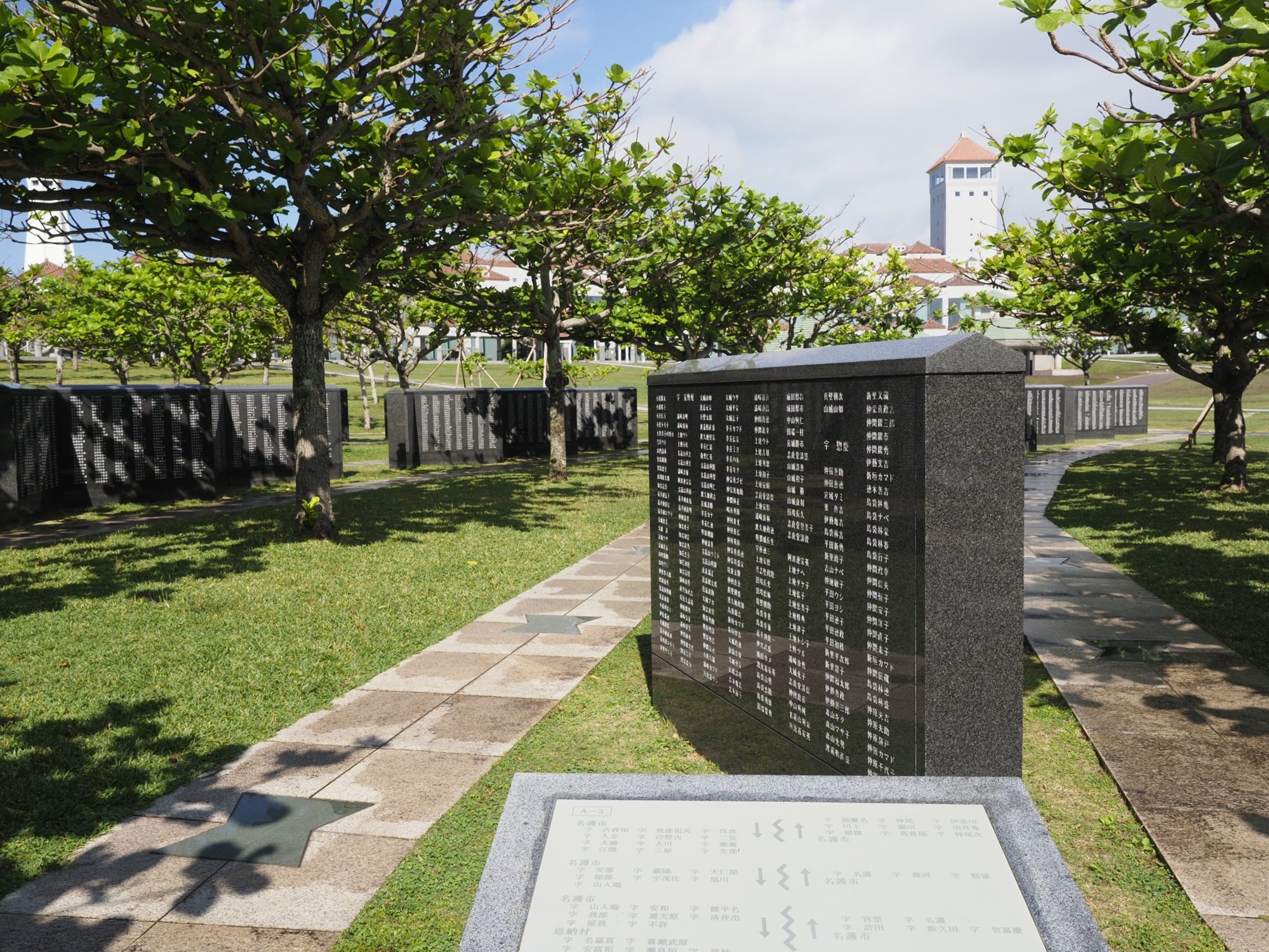 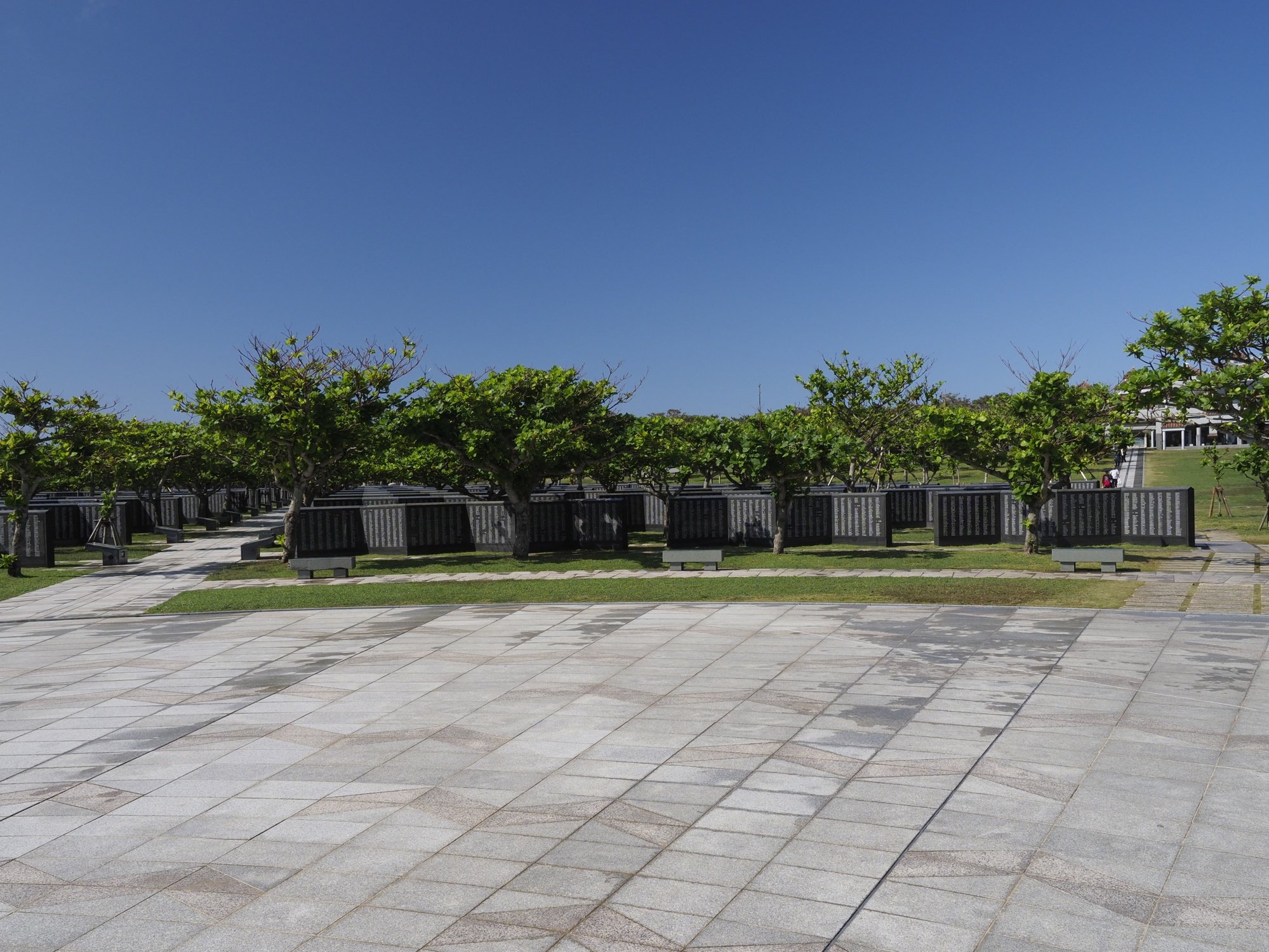 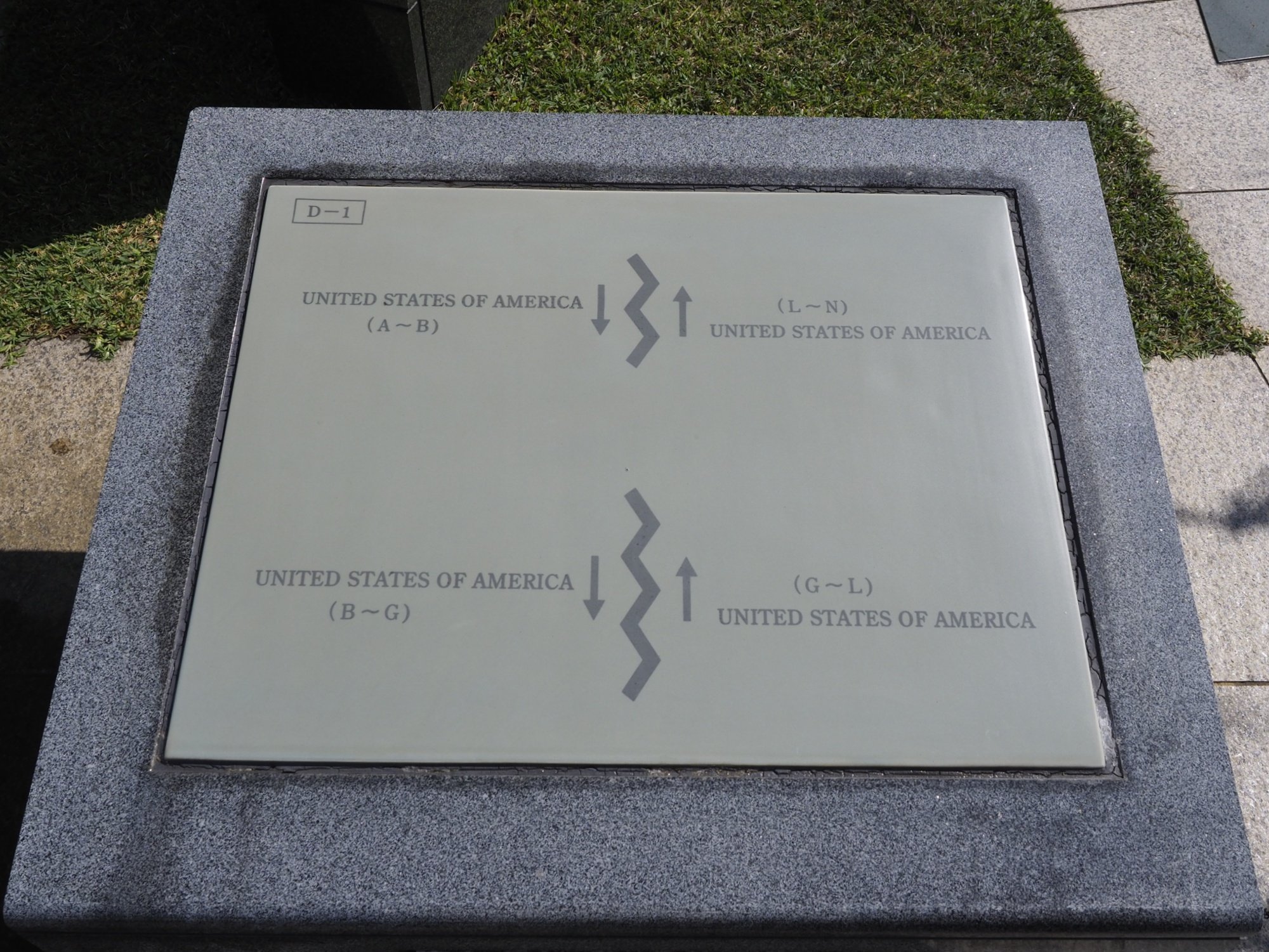 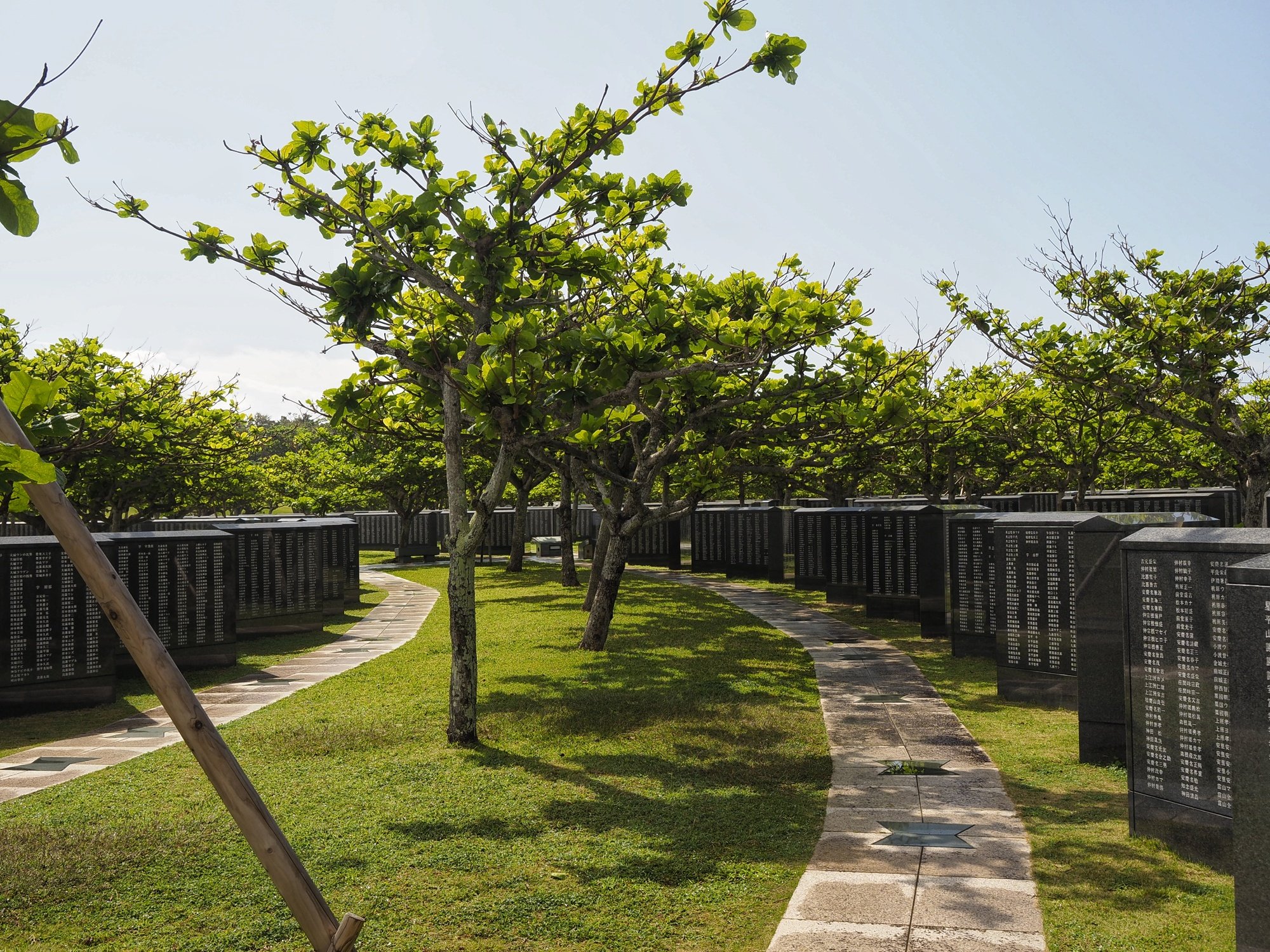 As if the weather wanted to underscore the mood it changed from dark clouds and rain to sunshine and 30 degrees. Just in time for our next to last stop of the tour. Some swimming time in the sea. Unfortunately only the two of us where keen to go for a swim. At least two more went to get their feet wet. 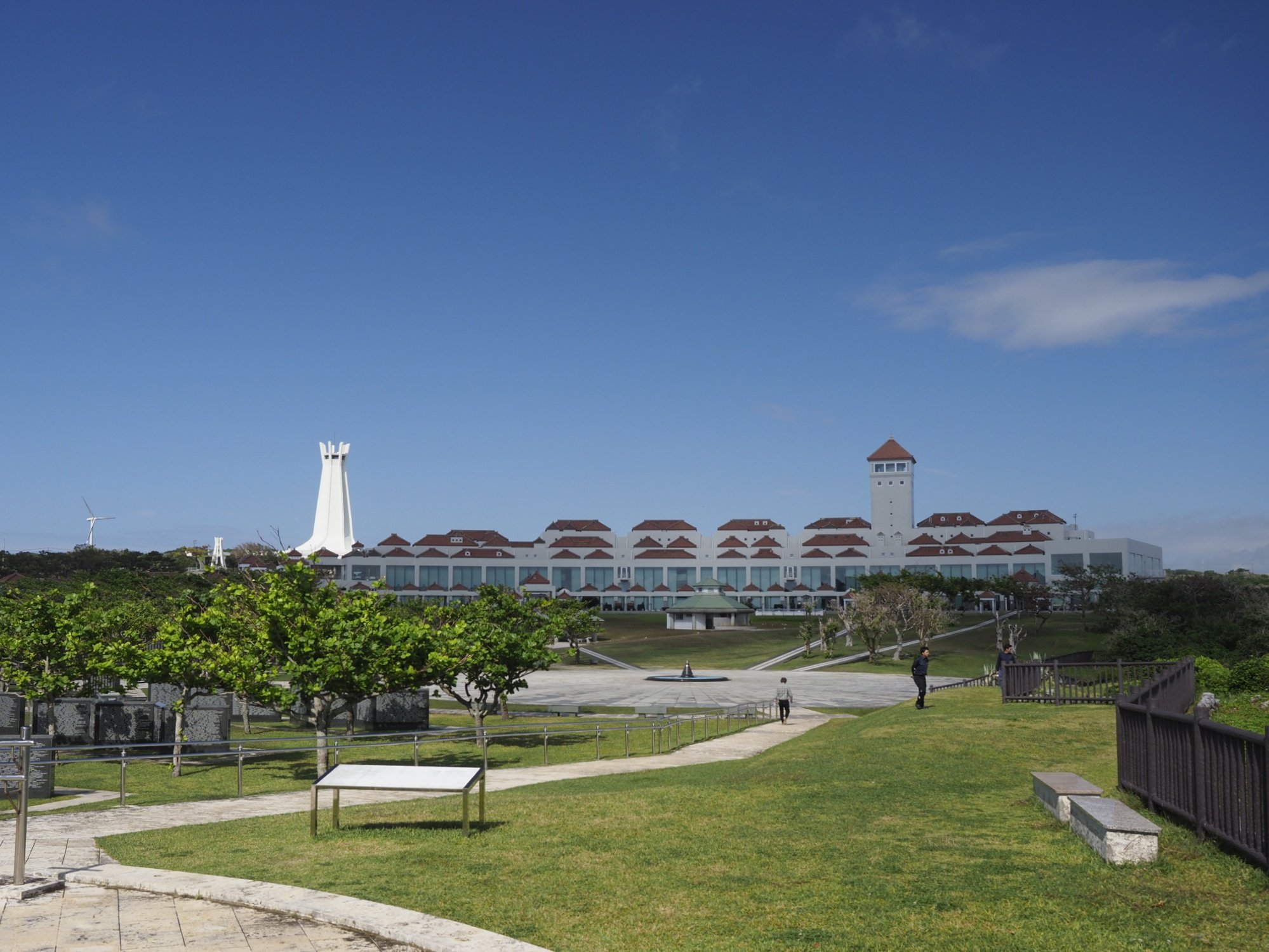 After that short interlude is we arrived back in the hotel in the early afternoon. Enough time to get some food in for the last part of todays program. In the evening we met up in the lobby and tried some Awamori. This local spirit was imported from Thailand centuries ago and is made from long grained rice instead of the short grained one which is commonly used in Japan.