Along the west coast of Okinawa

Today’s trip reminded us about the impact of the US invasion of Japan. Okinawa in particular. The weather was great. Sunshine with a sprinkling of dark clouds accompanied by gusts of wind. 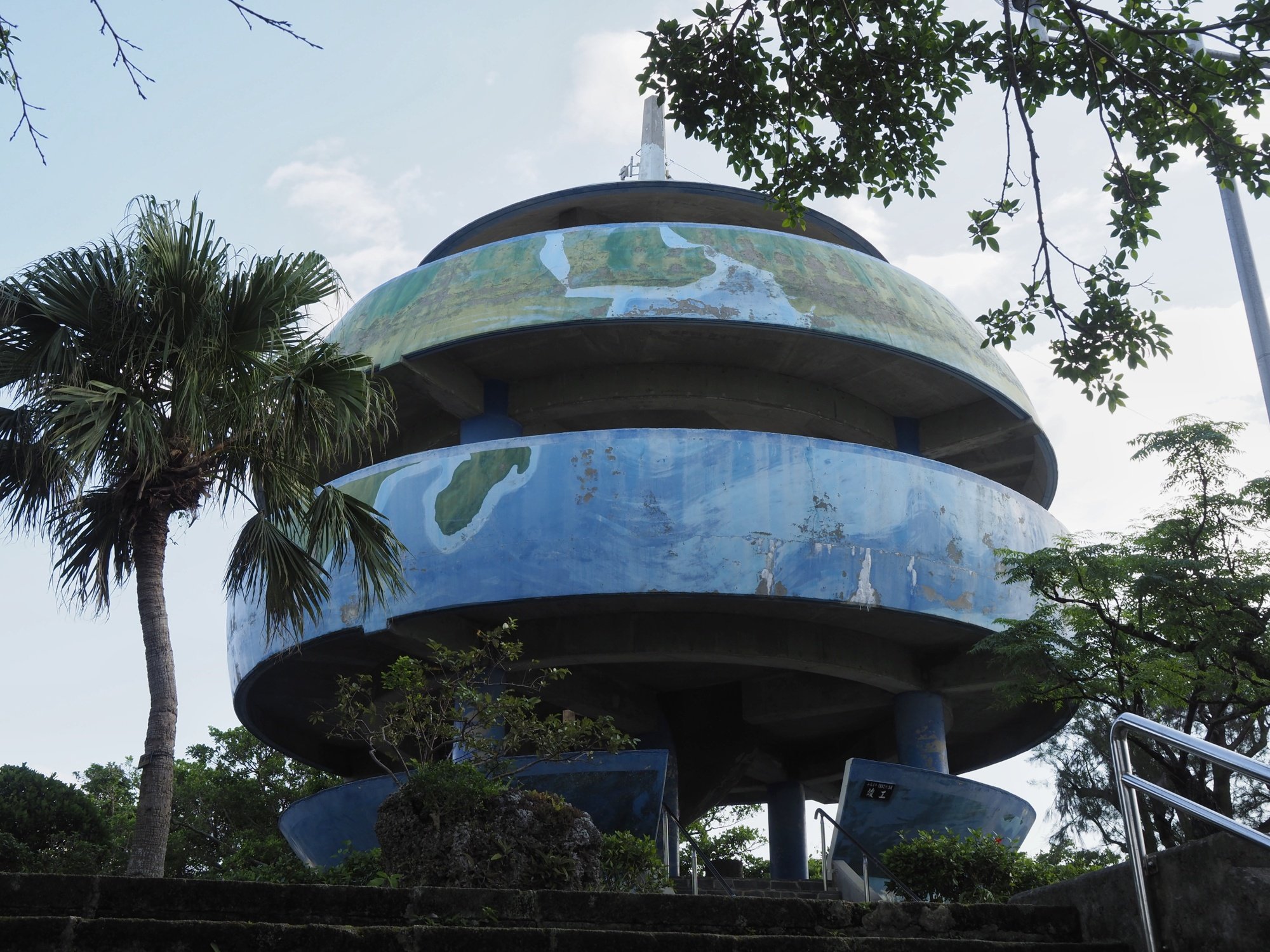 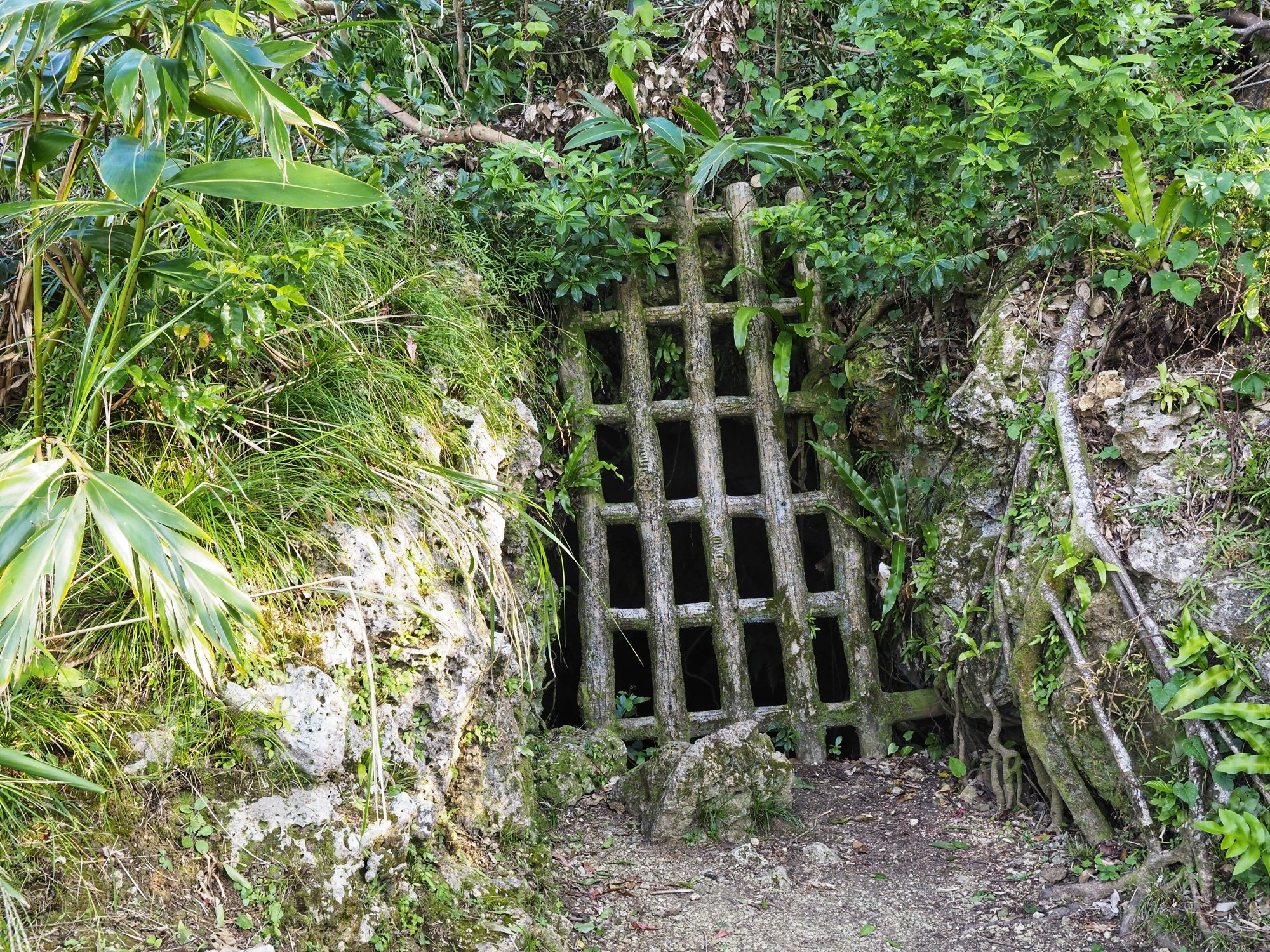 The first stop was at Kakazu Takadai Park. The park was the location of a bunker overlooking a flat ground which was one of the landing sites of the American invasion. Today this place is both dedicated to the fostering of peace and a great viewing point to Futenma base. One of the air bases the United states of America keep on Okinawa. This one is manned by the Marines and sports some Ospreys and helicopters. This base which used to be good land for rice was supposed to be moved to another location a few years ago already. But as usual politics came first. 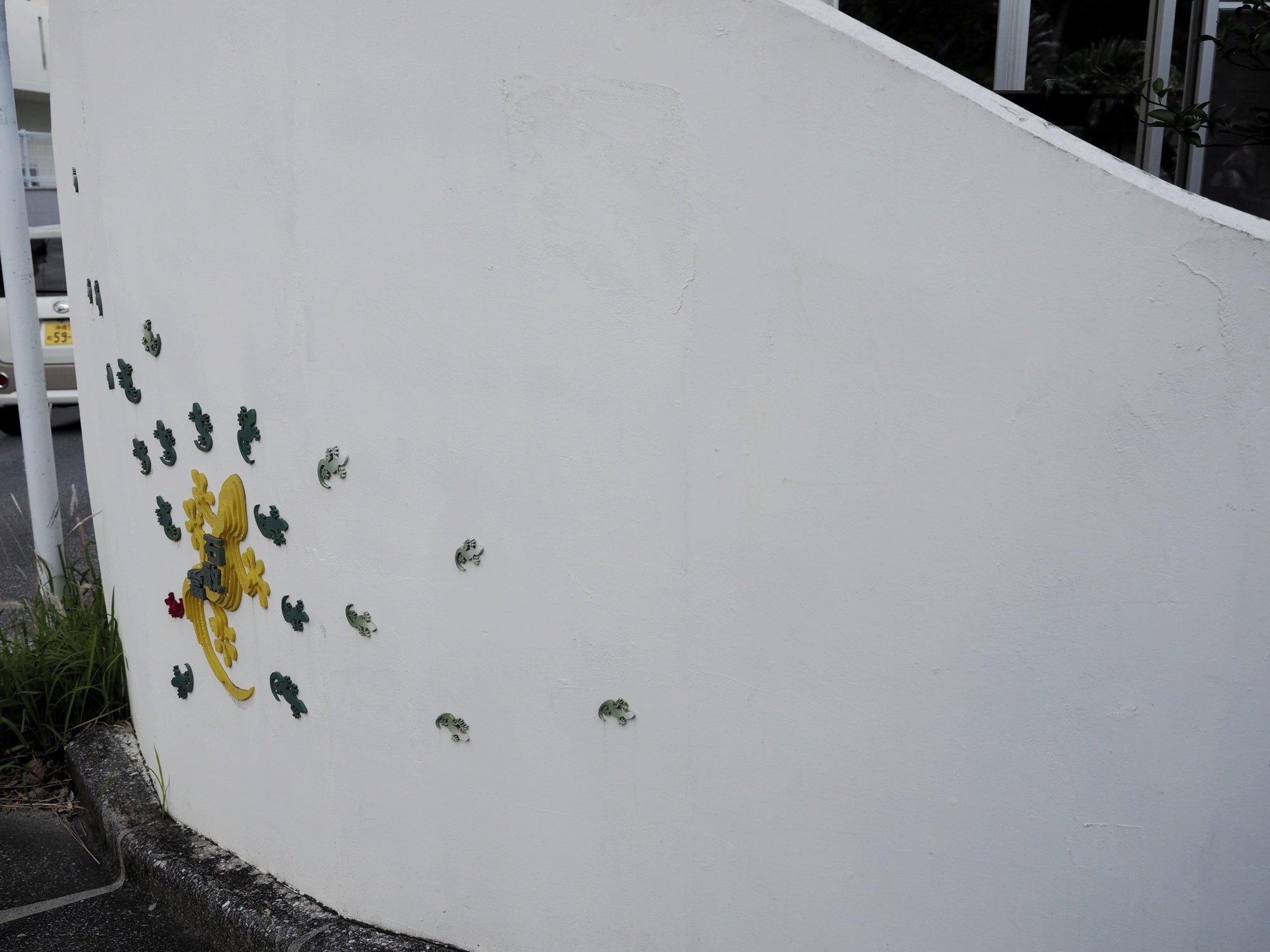 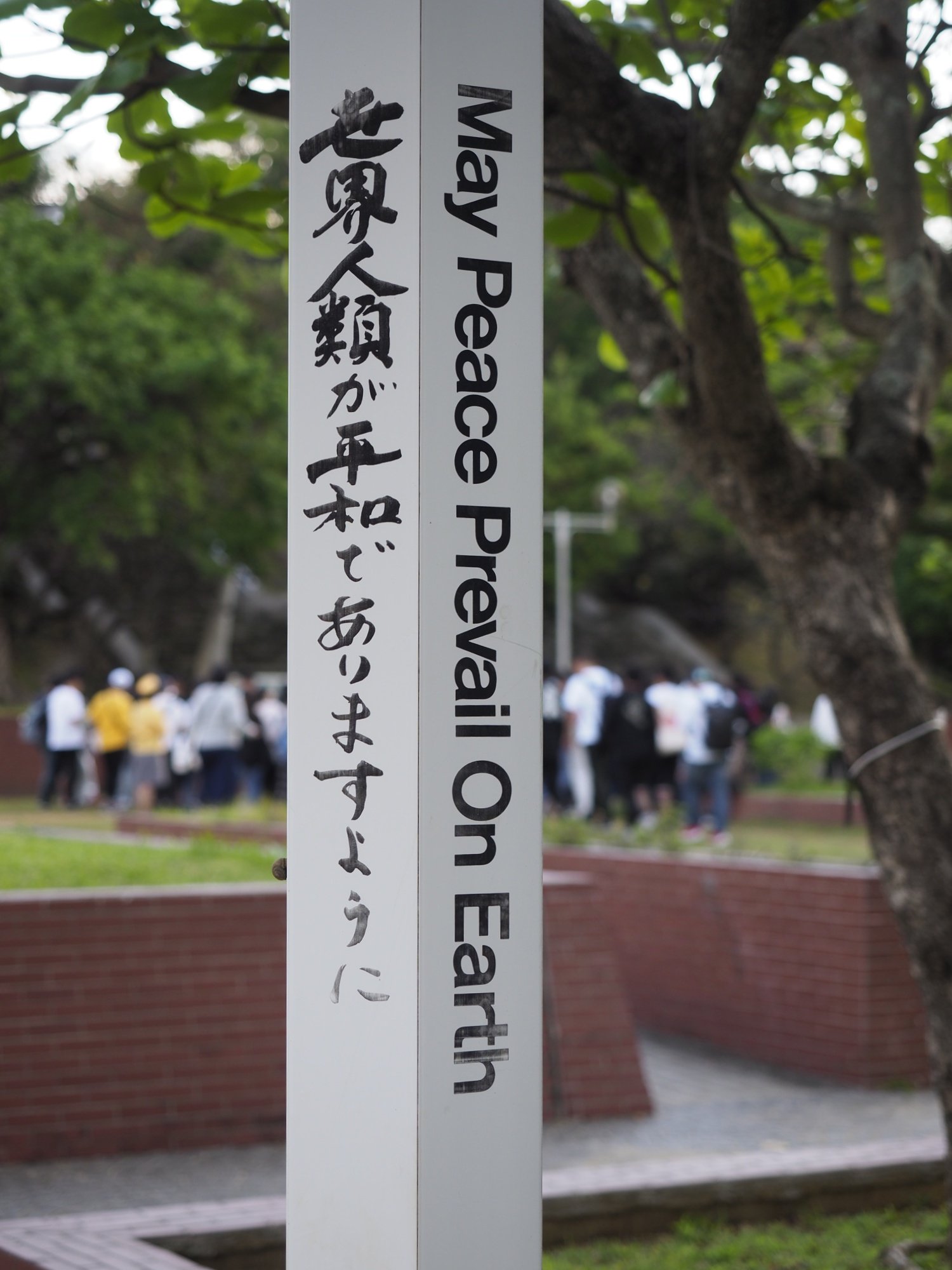 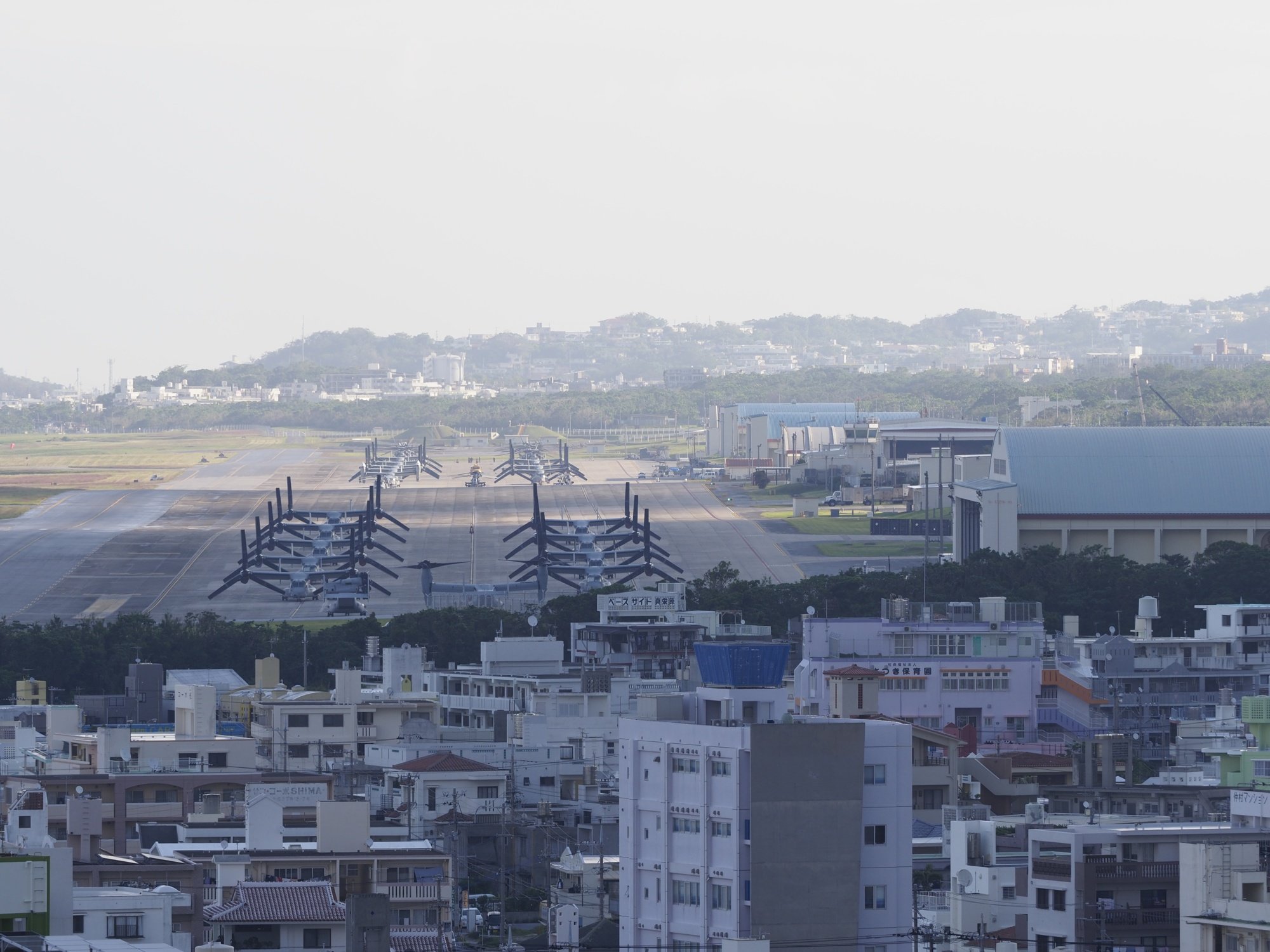 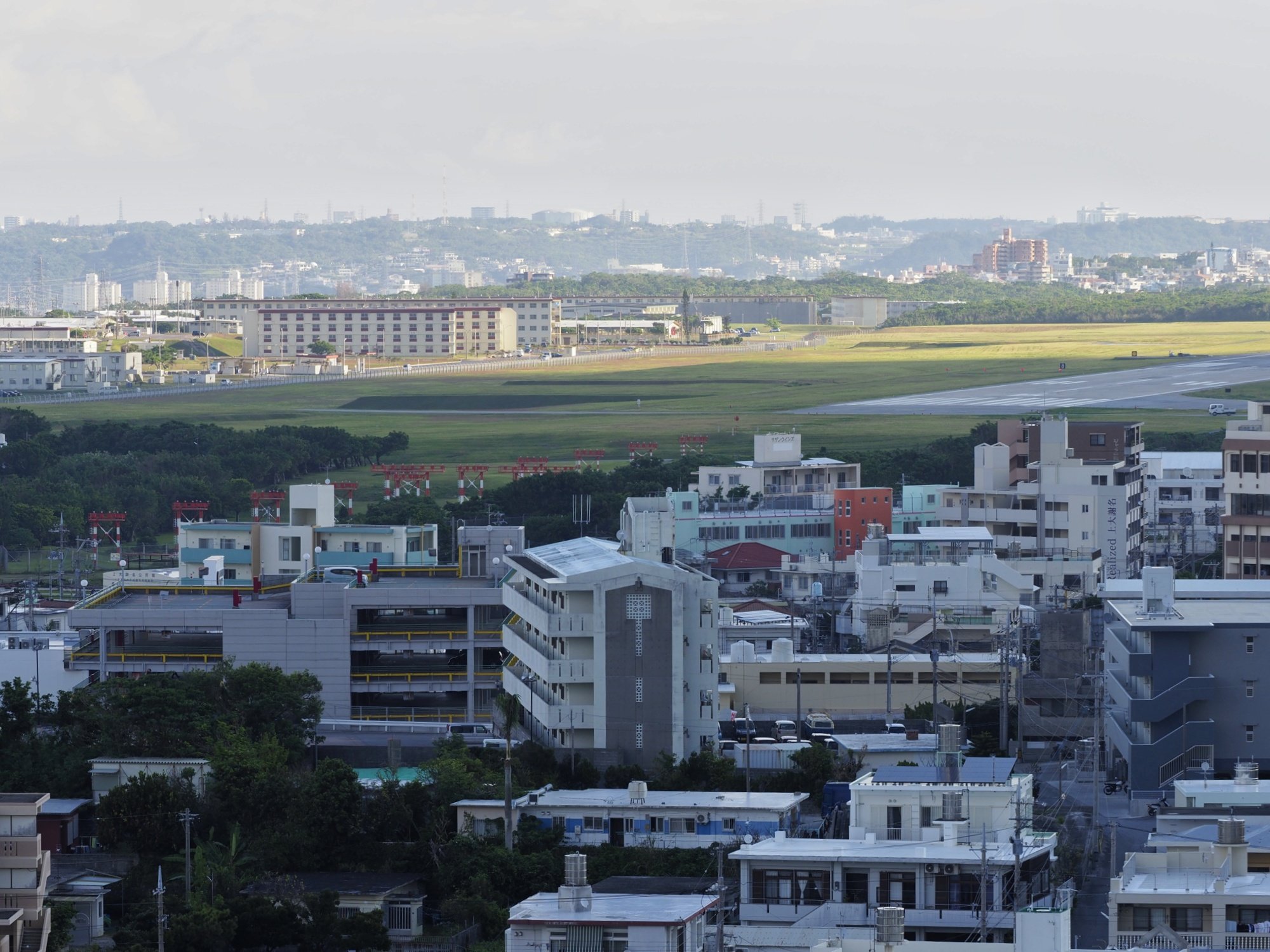 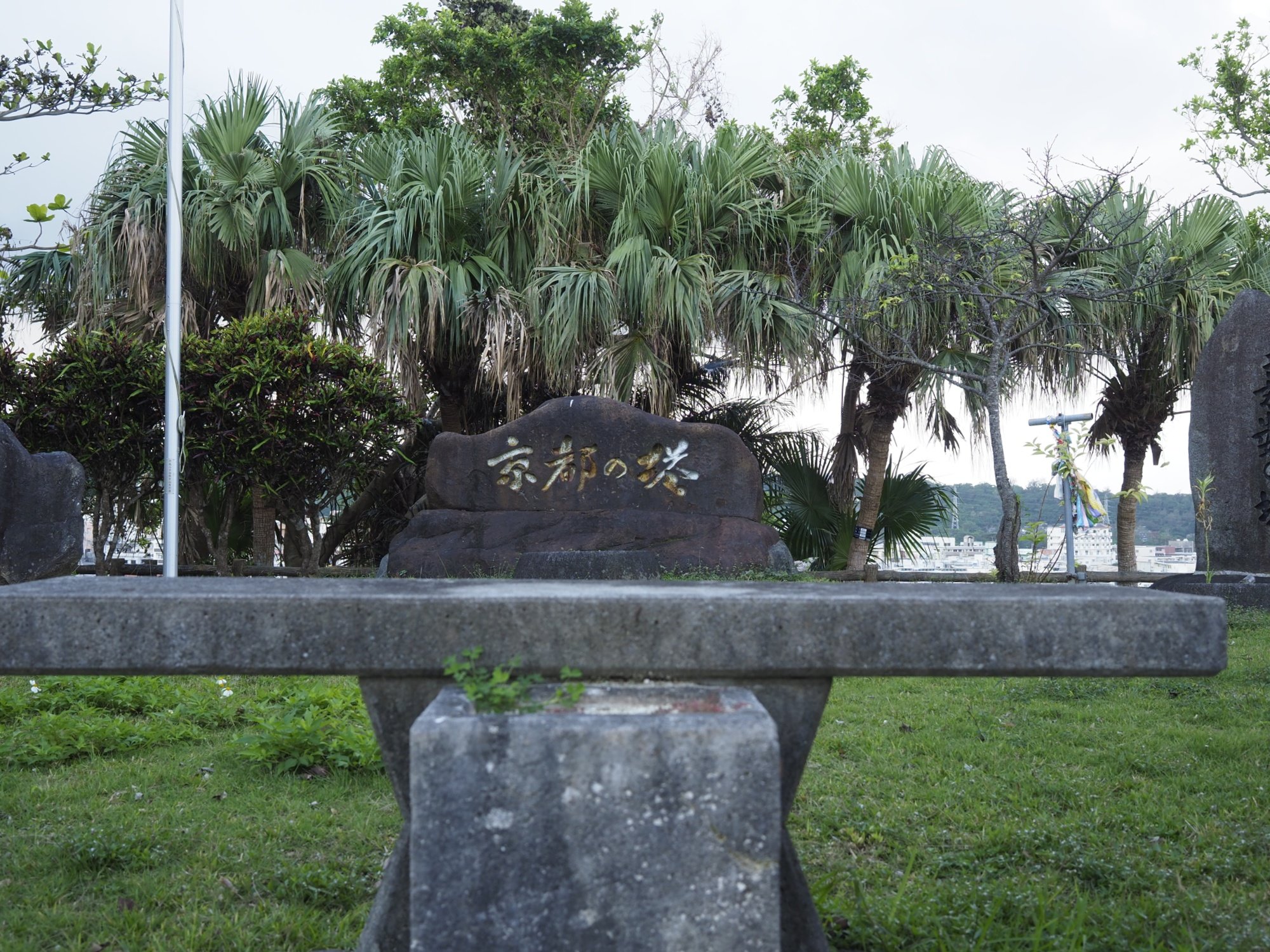 After that we drove past Kadena base. With its length of 2.8 km it sits on the biggest stretch of flat area in Okinawa. The airfield had been built by the Japanese and was the starting point for a lot of Kamikaze raids. Nowadays you’ll see lots of US fighter jets doing sorties, practice runs at low altitude and landings. There is even a commercial building where people are doing plane spotting on some kind of observation deck. There is also a statue to the man who brought the sweet potato to Okinawa. 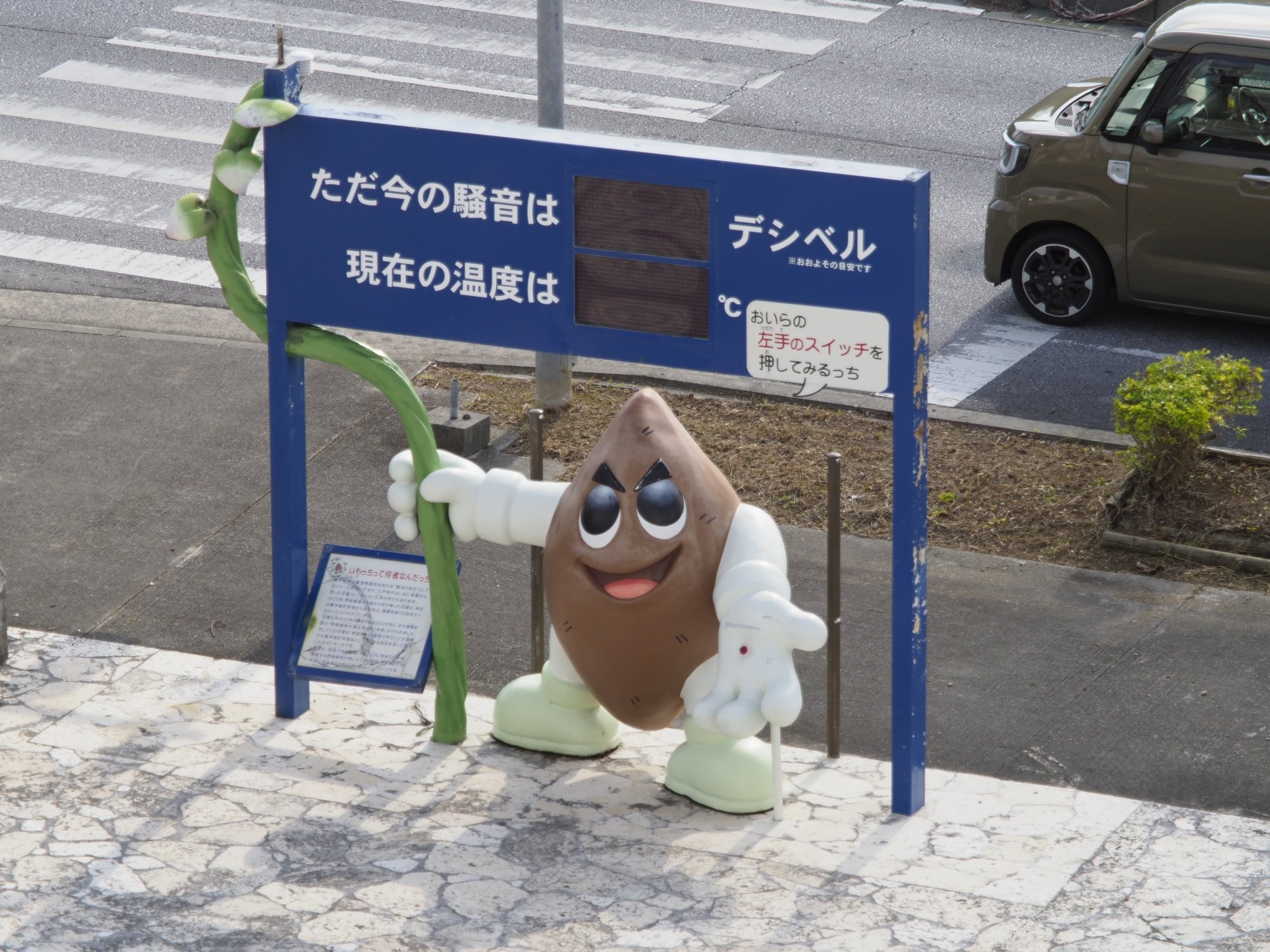 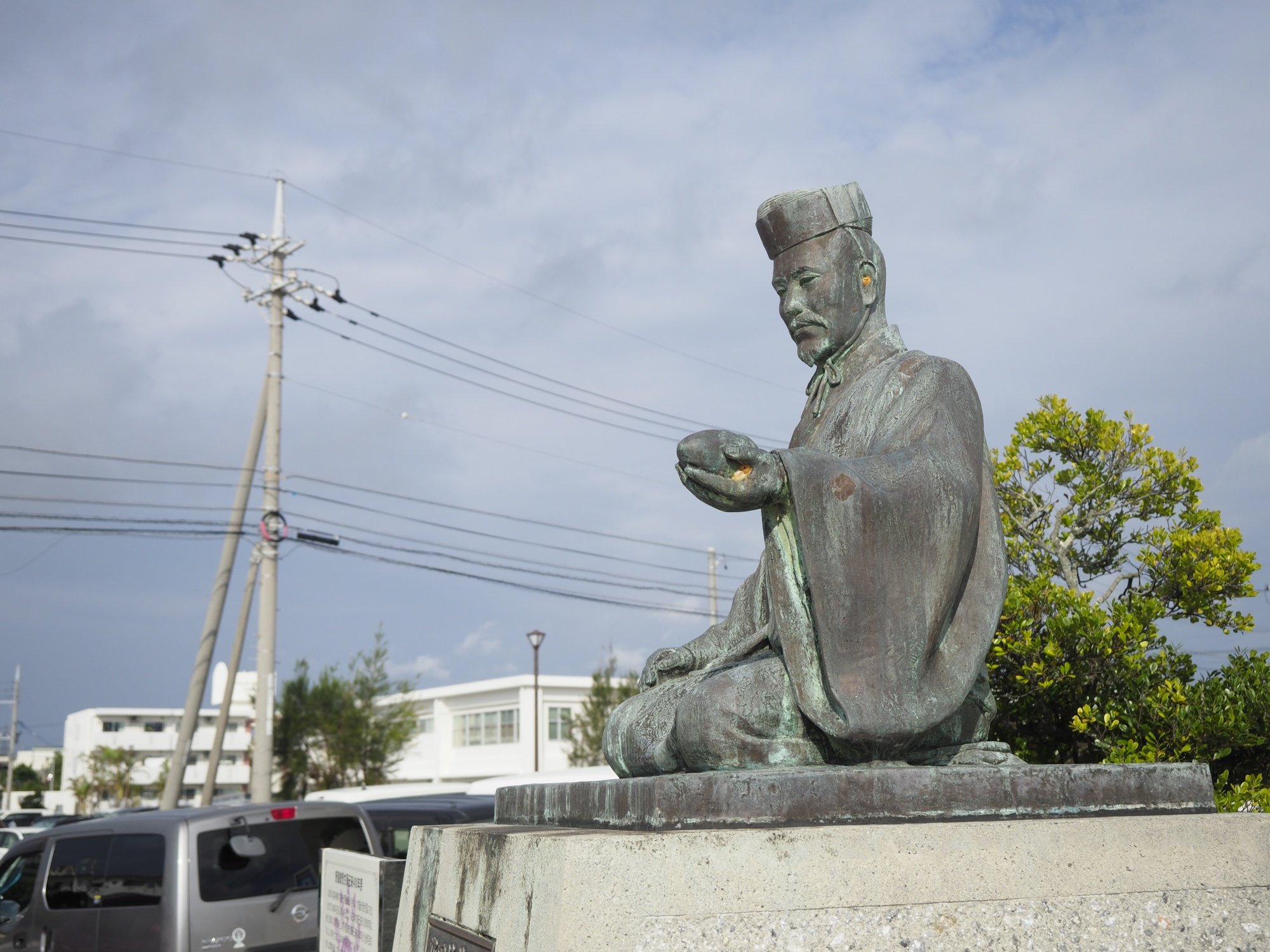 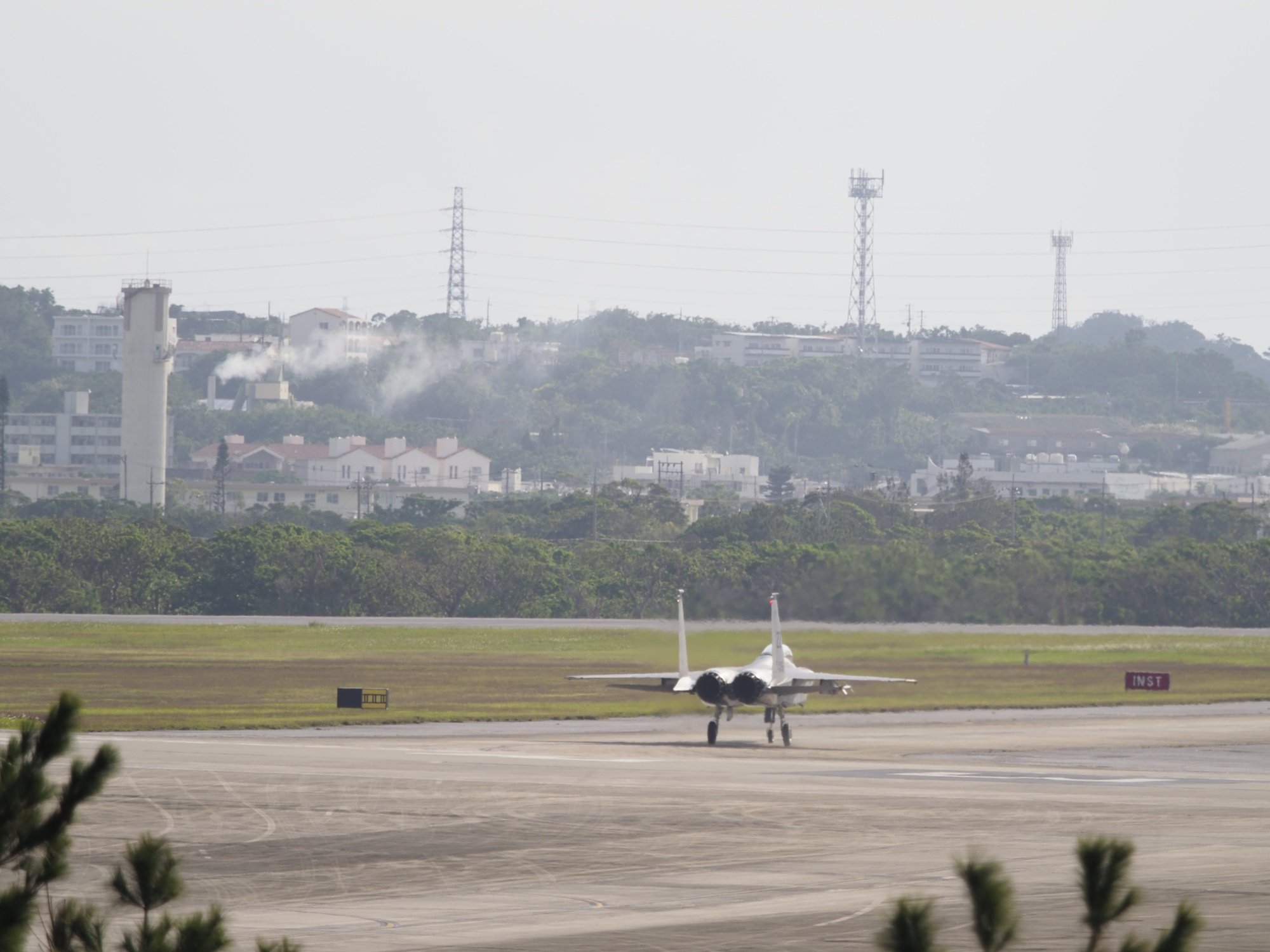 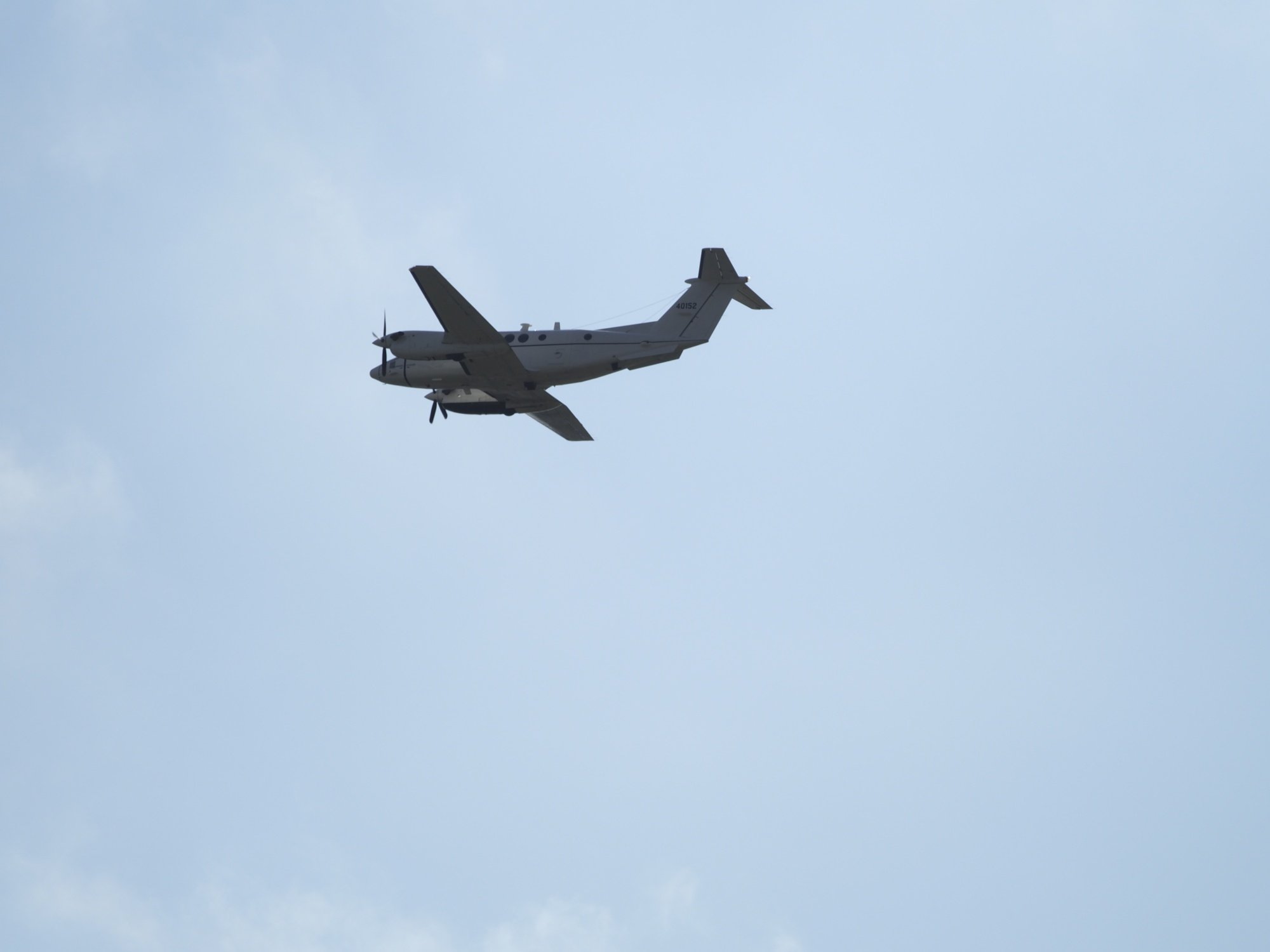 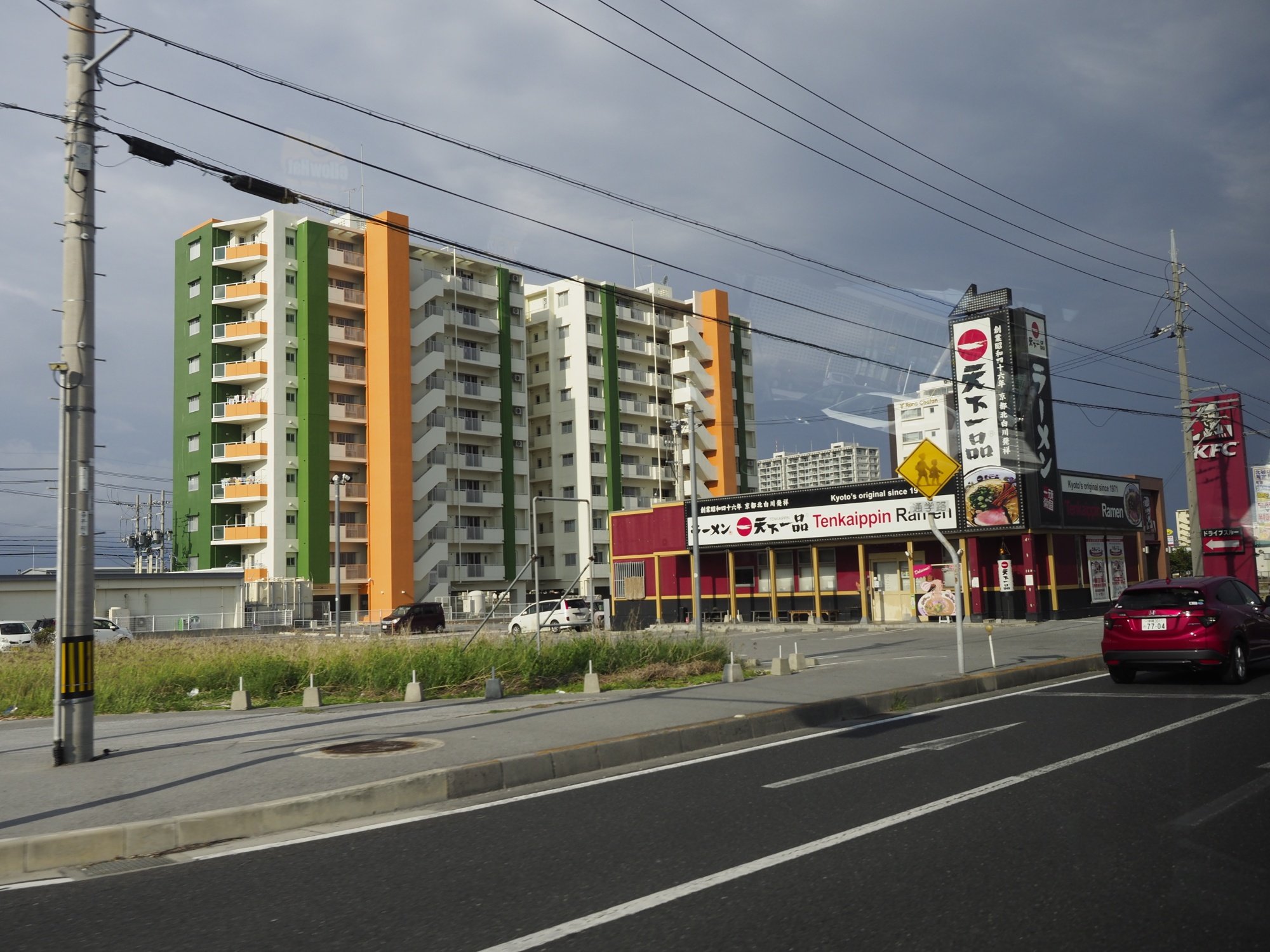 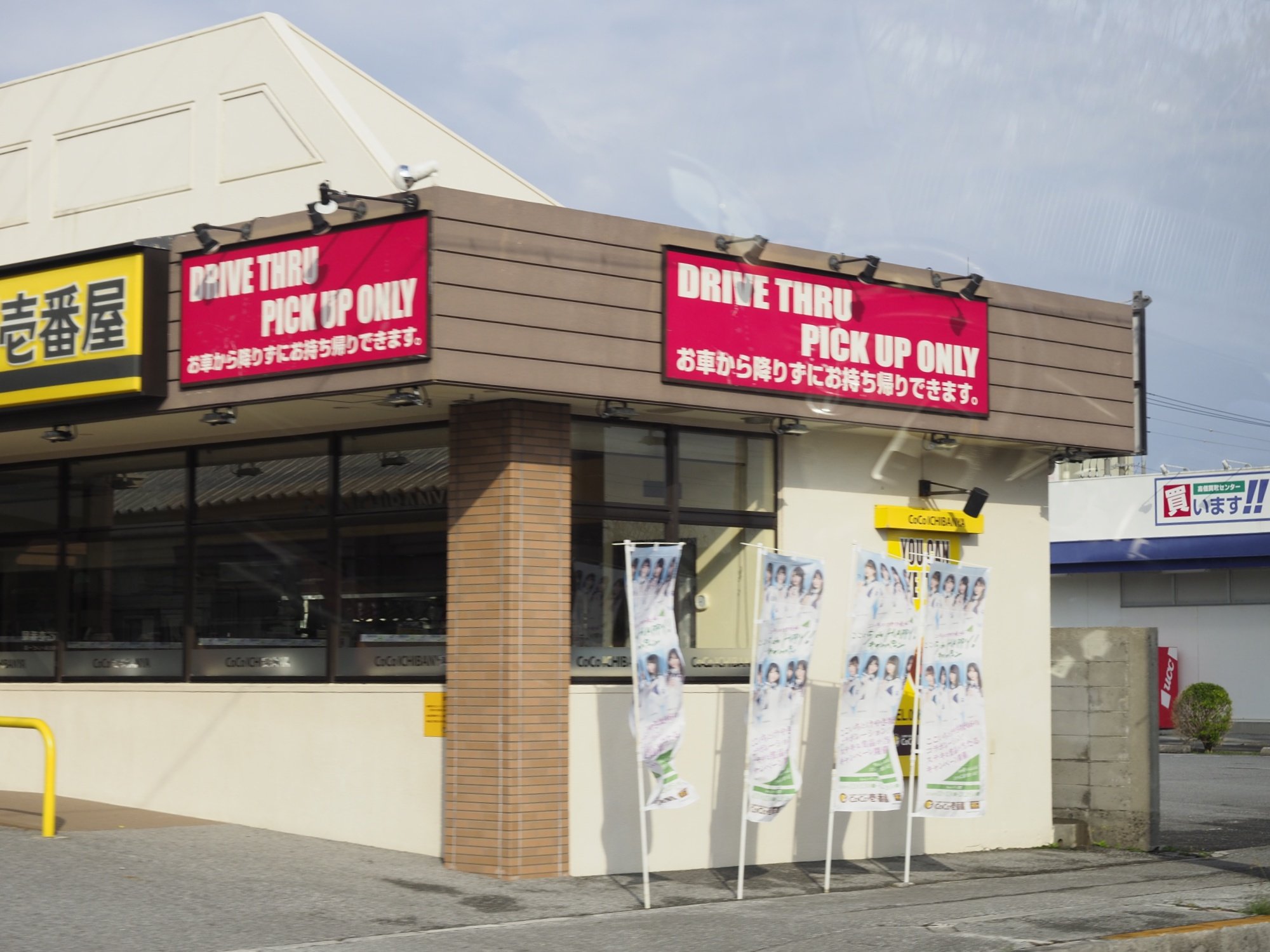 The area around the airbase is actually one of the few places that got americanized in Okinawa. English signs, tattoo parlors, ads for off base housing and even “veteran owned” car dealerships.

Leaving all this behind us we made our way to Manzamo. This natural stone bridge was made into a tourist spot because the seaside part of the arch looks like a an elephants snout. Apart from that the legend has it that ten thousand people could sit at this place. The buses of (mostly Chinese) visitors where fortunately not that plenty. 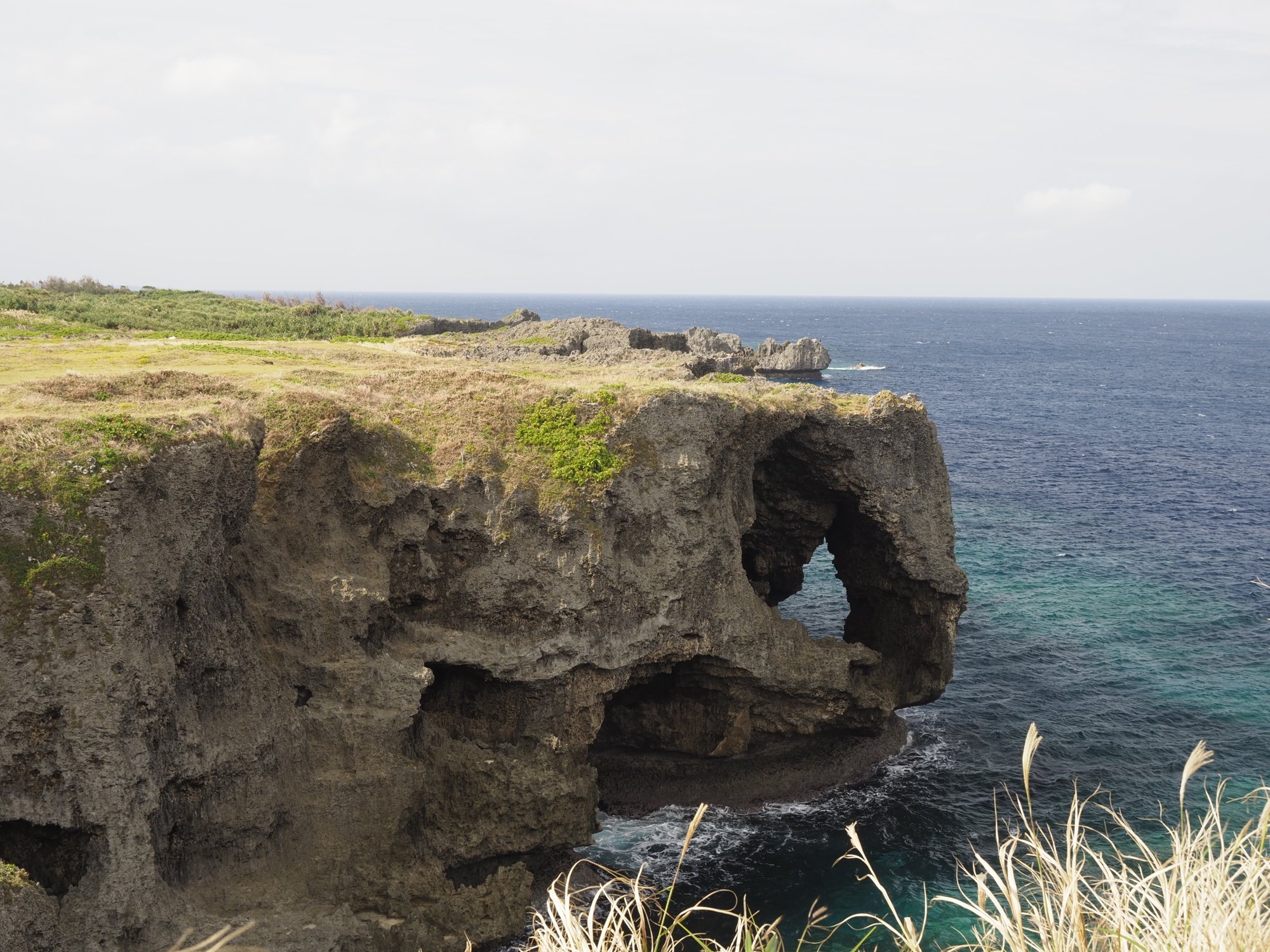 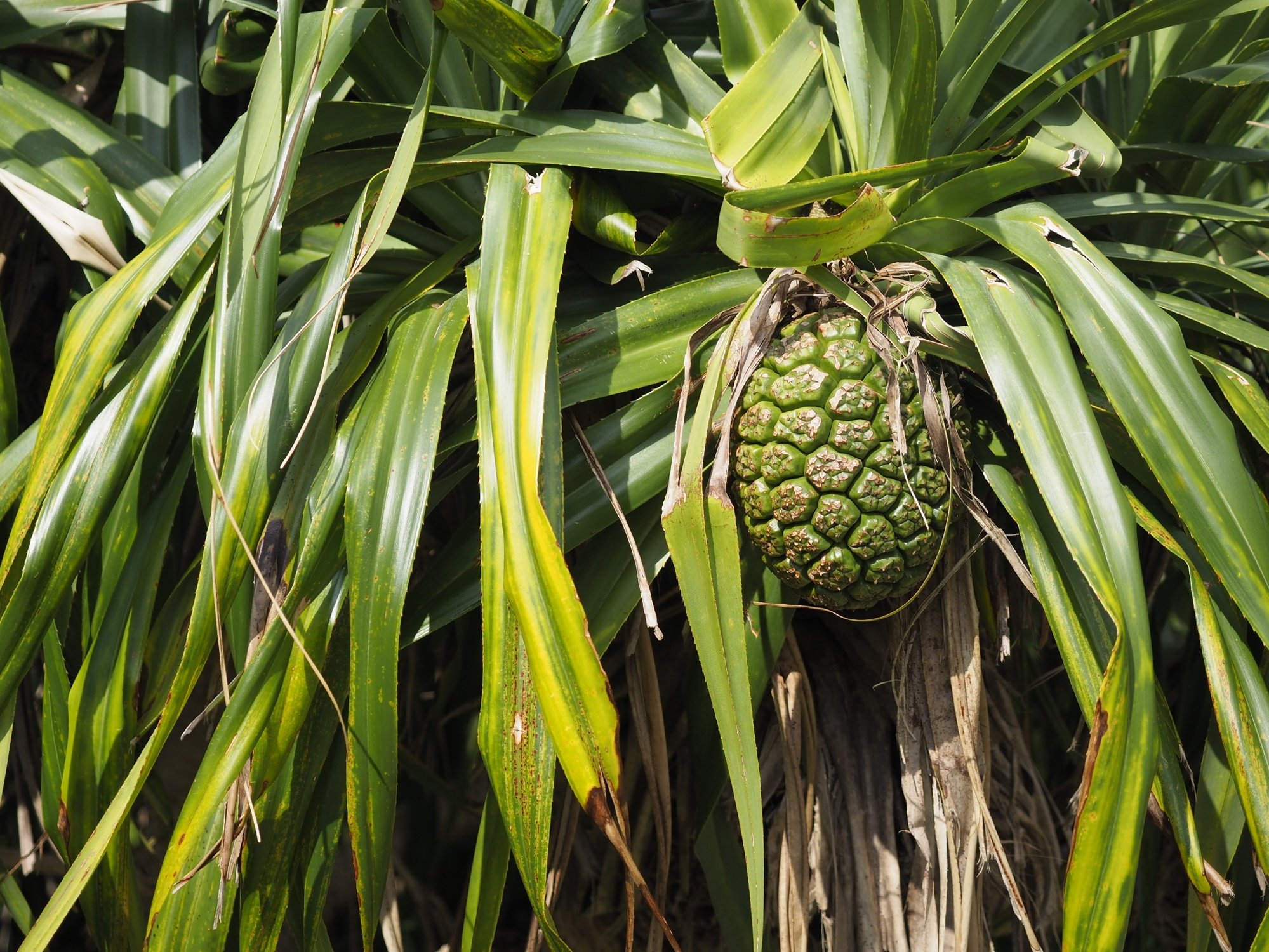 For lunch we drove a bit further and where lucky that one school class was just getting out of their wetsuits and leaving when we arrived. So we had the place (including showers) to ourselves. After diminishing the bento boxes we had bought on the way we where treated to some pineapple cake. The cake was a present from our taxi driver and delicious. 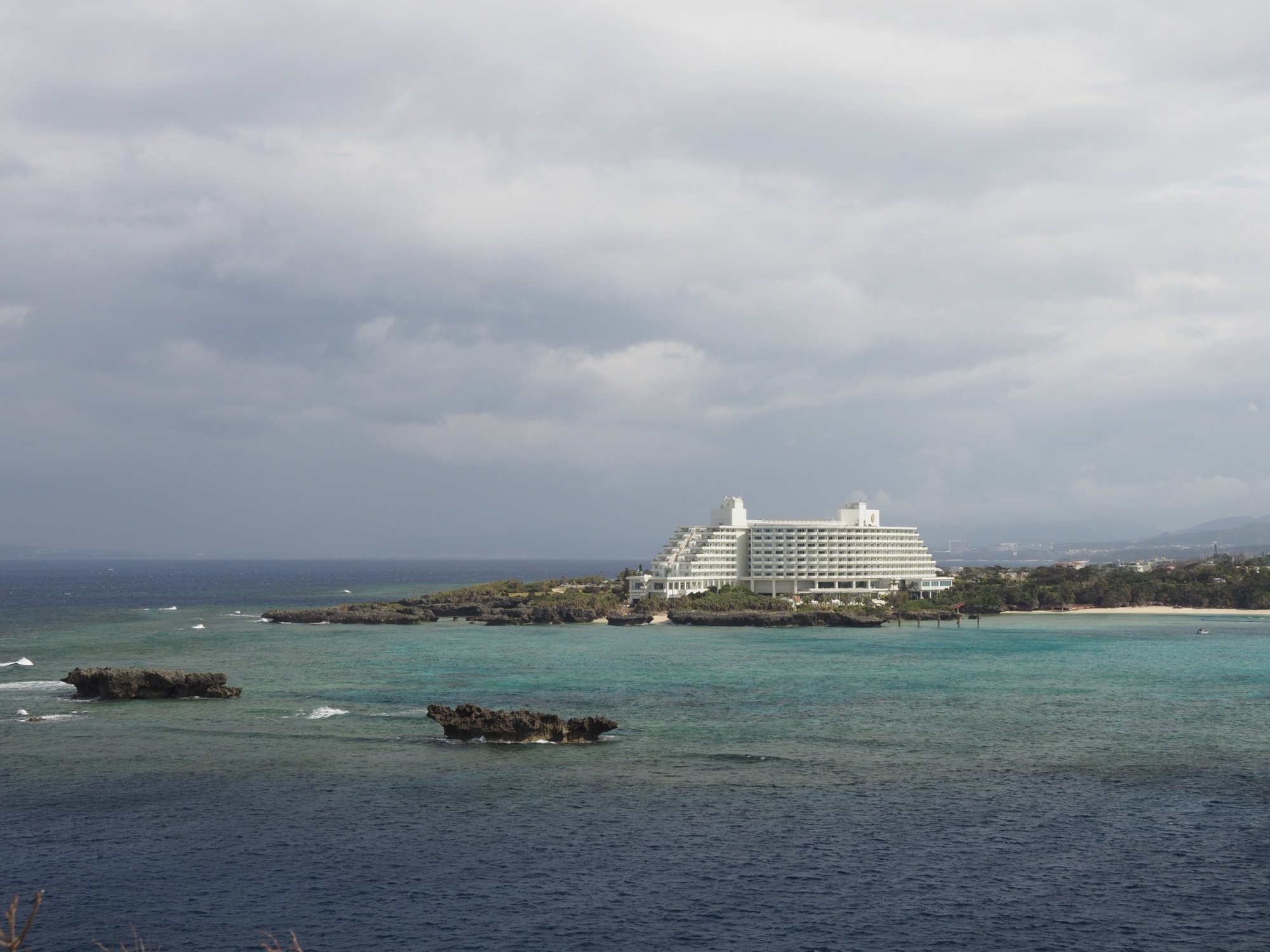 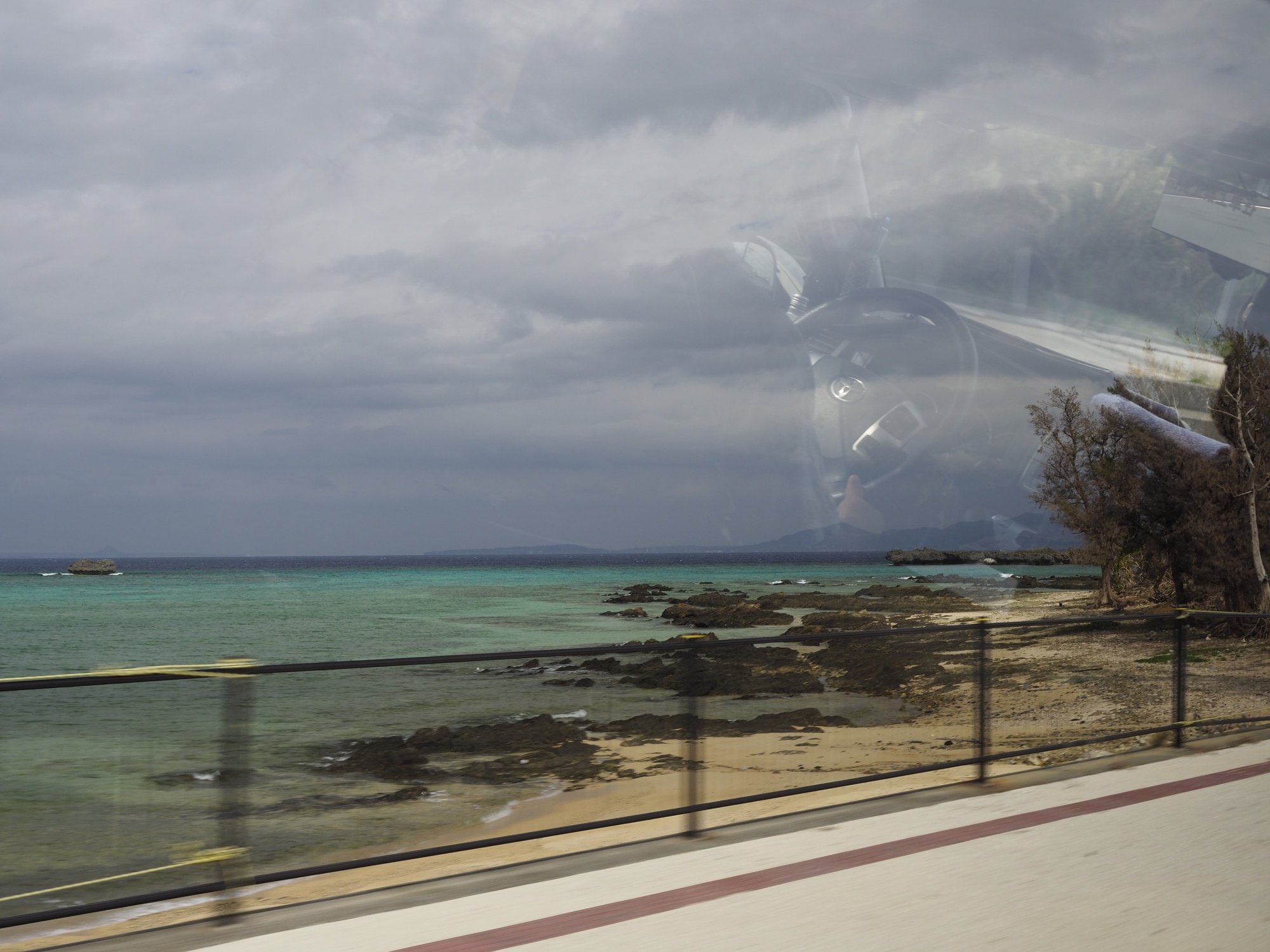 Next we dipped our feet into the sea. After two of us decided that the water was quite warm we changed into our swimming trunks and had a nice dip. While we were in the water clouds came in and it started to rain. The droplets on the warm water made for a nice scenery. And it was just a mite warmer in the sea than outside. 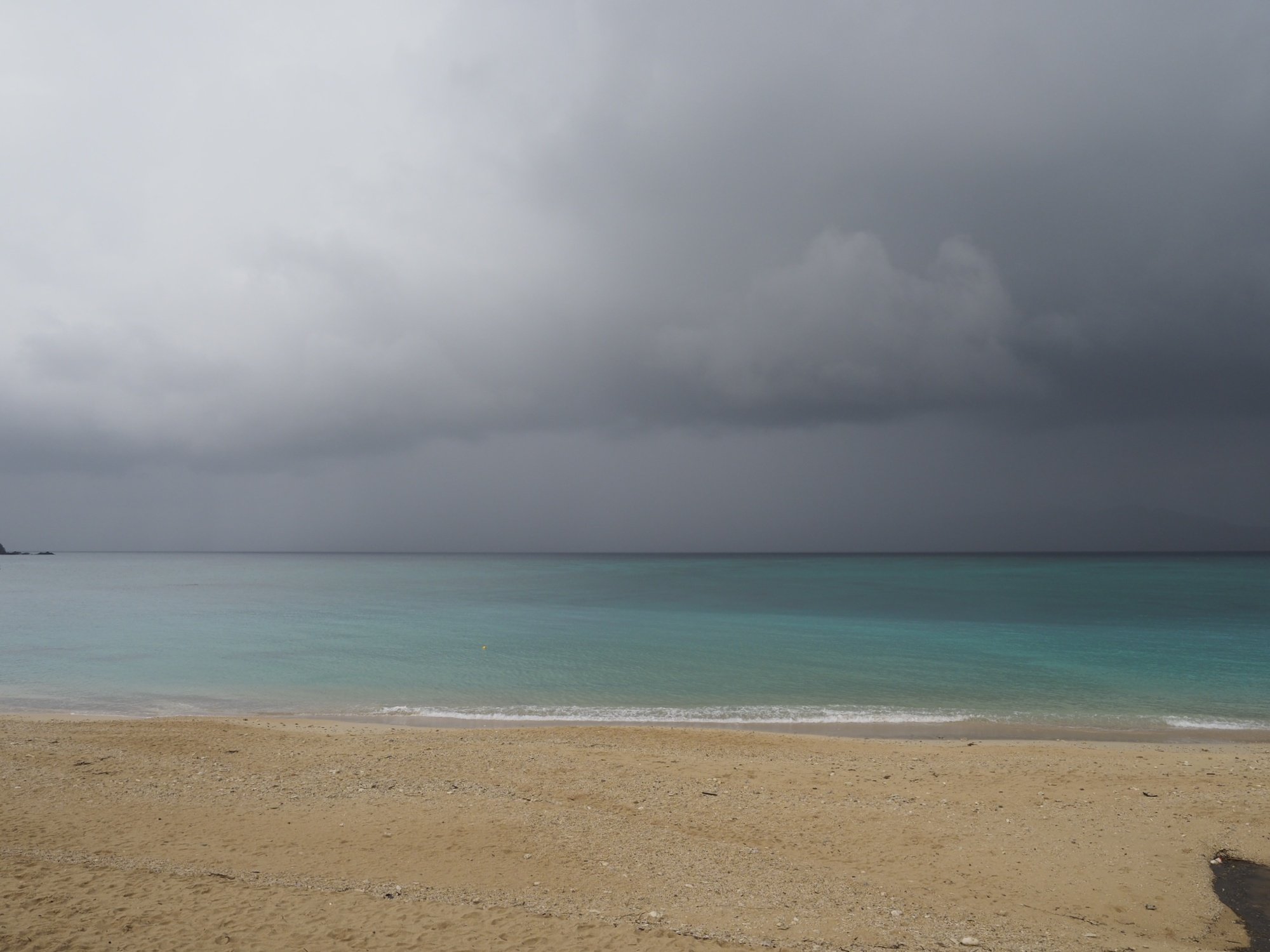 As our time here was running out and we had to take a natural shower on our way to the showers. These showers were a hundred yen as opposed to the one outside. Fortunately we hadn’t seen the poster listing all the poisonous sea creatures around Okinawa beforehand.

Our last stop was the Ocean Expo park. This big aquarium showcased different kinds of fish and crustaceans. From whale sharks to reef fish. From fish native to the deep sea to those whose habitat are the mangroves. A strong focus was on sharks though. It was even possible to feel the skin of different kind of sharks together with an microscopic image of it. 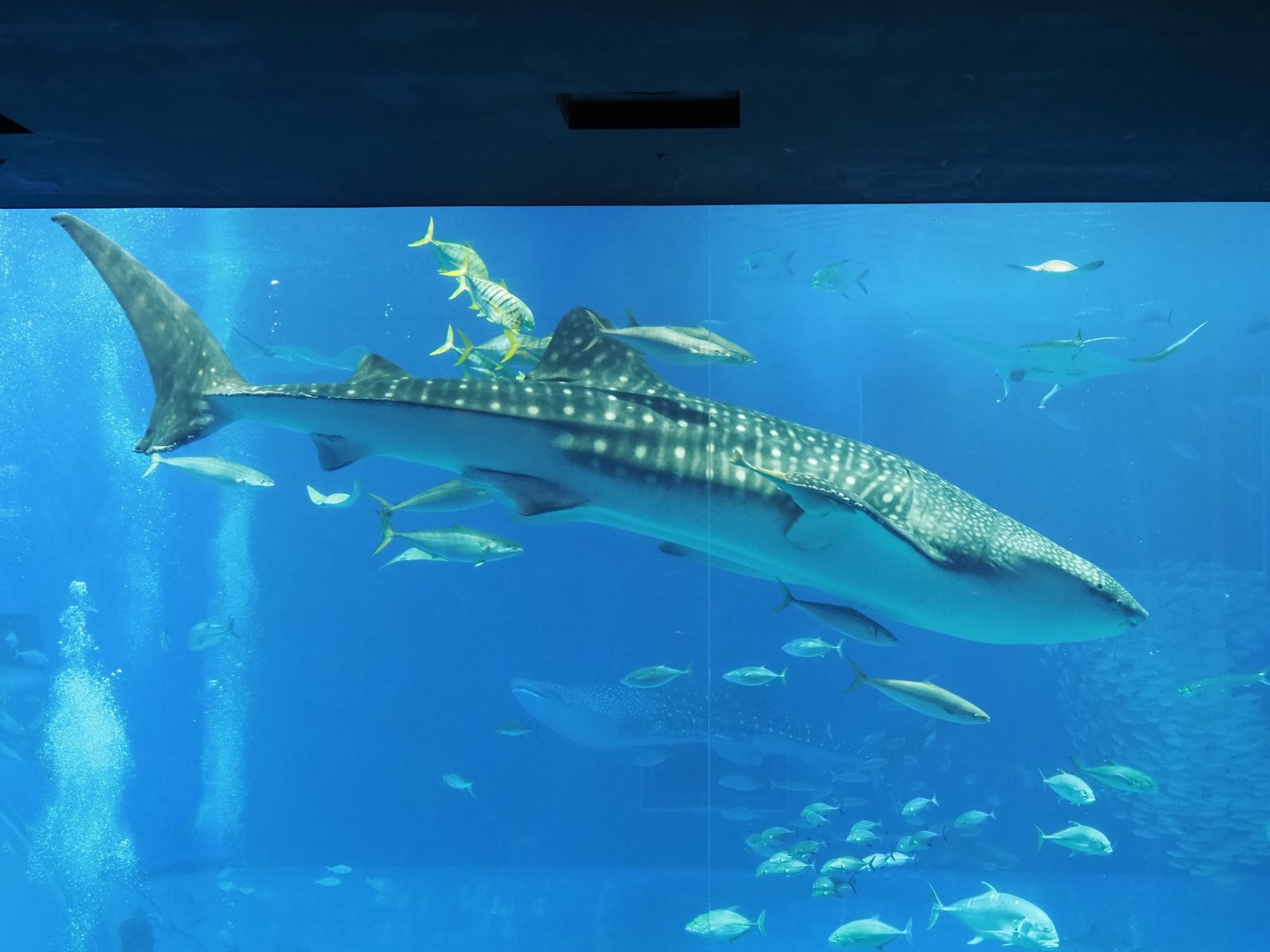 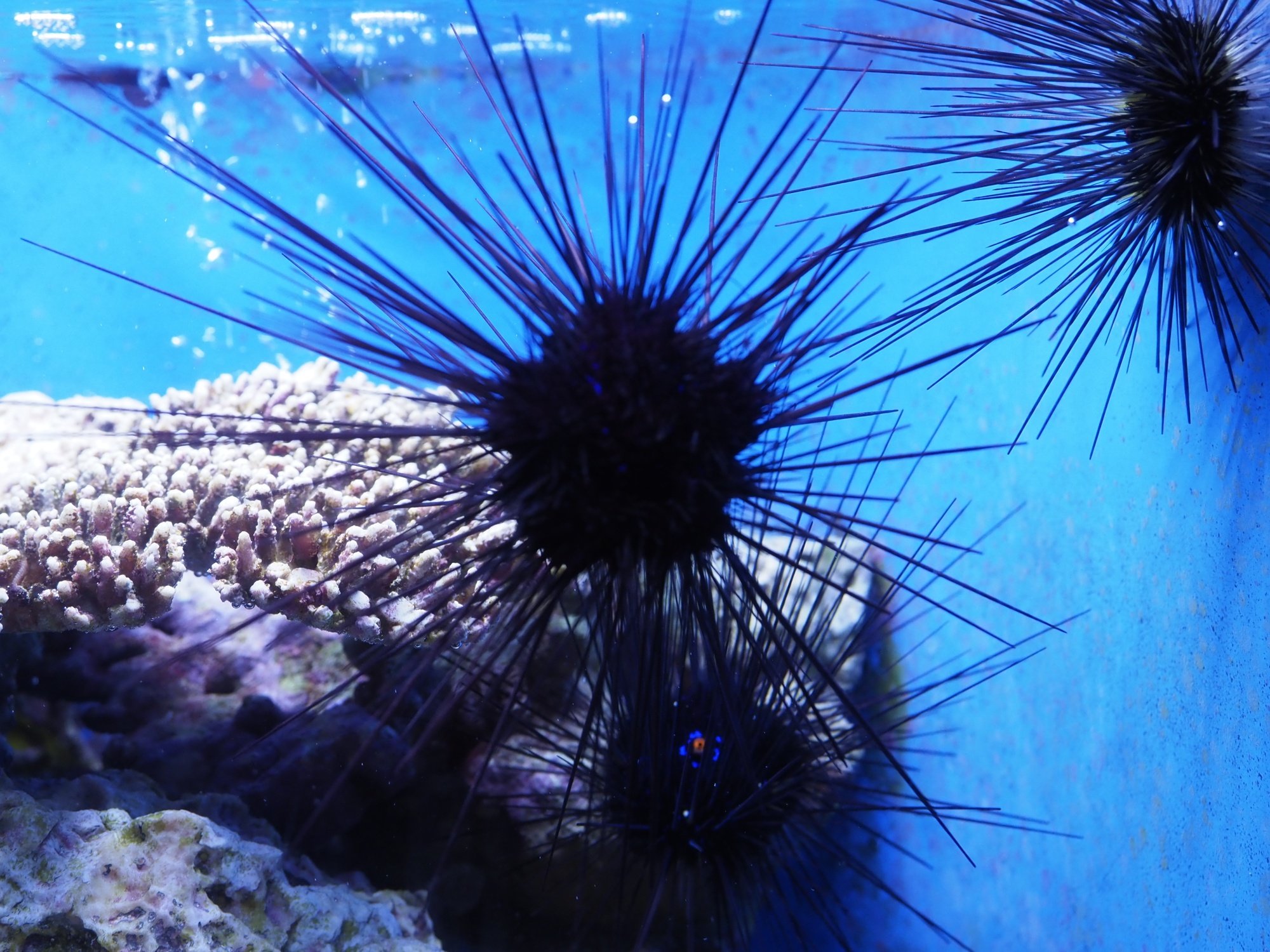 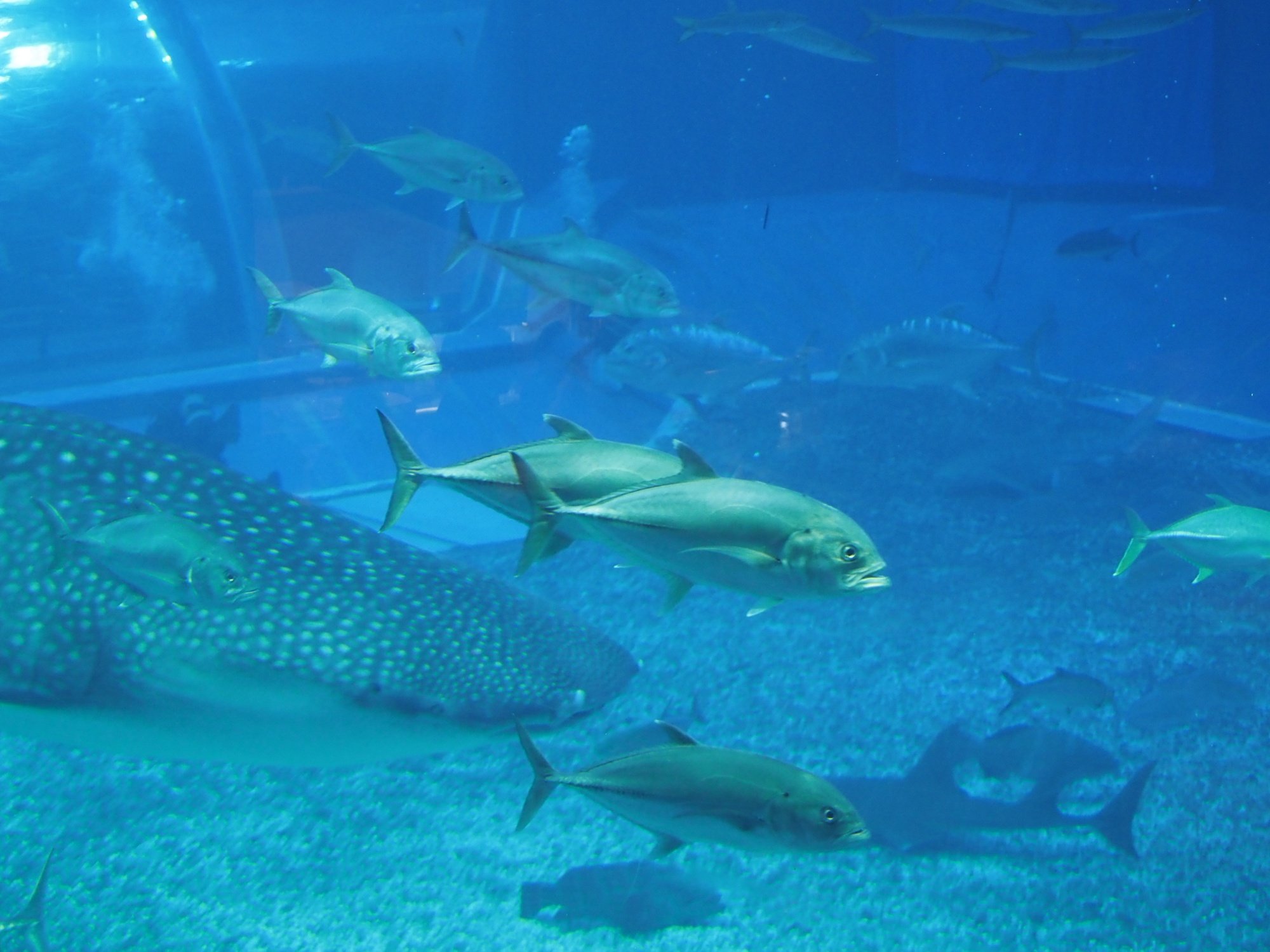 This park did have a dolphin show as well. I did watch it and the tricks were quite impressive.

But in my opinion all the pools of the aquarium – whether for the dolphins or the fish inside – where too small. The animals did not really have a place where they could hide or just rest.

At the end we had a bit of an exciting moment when one member of the group could not be found at the agreed on meeting place. So we went back out to look if we could find her. Someone did find her finally sitting inside the taxi, not really understanding what all the fuss was about. Our tour guide was not very happy.

For dinner we went back to the first place we did have dinner in Okinawa. The reception was just as warm as the last time. As we where without a translator this time ordering was done by pointing. Which limited the choice a bit but still lead to good food.