Nossa Senhora do Rosário dos Pretos and a night out

In the evening we went to Nossa Senhora do Rosário dos Pretos where we attended Mass.
A catholic one with lots of incense waving it seemed. But that was about all that reminded me of the last catholic one I visited.
Maybe part of this is due to the history of this church which was not built by the white masters or the clerics but by the negroes that where not allowed in the regular churches.
Then there is the part that in this church Mass is not accompanied by an organ but by an Atabaque. Which is unusual because this drum is associated with Candomble – a predominantly black religion with african roots.
To change it up some more the priest asked about the origins of the guests at the begining and there was a lot of singing, clapping, handwaving and Musik inbetween the official parts of the liturgy.
Do I have to mention that all the officiants where dark skinned?
What struck me as most interesting was the arrival of the bread. Usually the bread for the communion is already in place when church starts. But here they made a celebration of it being brought in from the doors to the front in big baskets.
For me this has more to do with the feasting of the believers than the small piece of bread or oblate in europe.
The priest still ate his oblate and had his cup of wine. But the churchgoers came out with a pice of bread that had actual nutritional value. 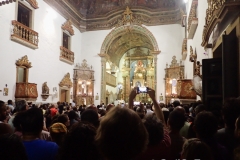 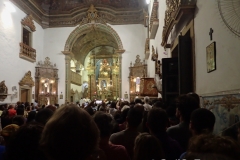 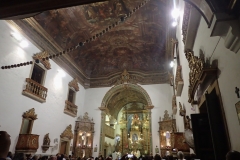 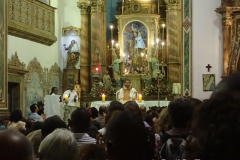 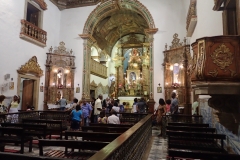 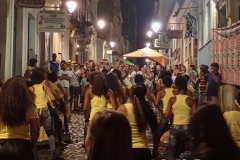 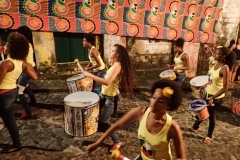 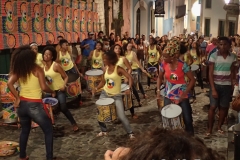 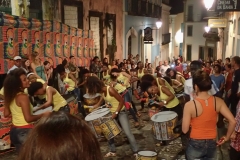 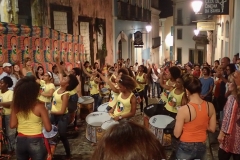 Afterwards we went through Pelourinho where different groups showed their talent with the drums. Interestingly they where either all male or all female.
But our entertainment wasn’t just limited to Samba, but we found some groups playing other types of music like Raggae, Raggaton, Forro and so on.